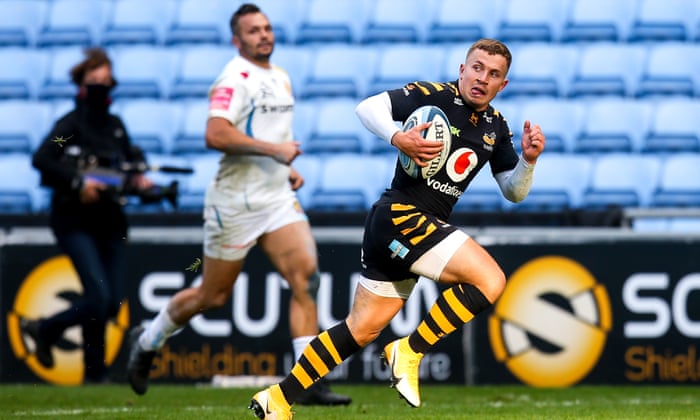 The top two sides in the table left hurriedly to start preparing for the play-offs after Wasps secured second place with another bonus point win, but neither knows who will provide the opposition this weekend with Bristol, Bath and Sale all possibilities depending on how the Sharks fare on Wednesday in their rearranged match with Worcester.

“We don’t know if that game will happen and there are no guarantees it will,” said the Exeter director of rugby, Rob Baxter. “So we will prepare according to how the table currently stands and that the match at Sale will not be played.” That would mean Bath travelling to Sandy Park with Wasps welcoming Bristol. “At least we know we will be playing on Saturday, whoever we are facing.”

There was incredulity here, privately expressed, that Sale did not forfeit their match at home to Worcester, but Premiership Rugby’s decision to disregard its own policy on games unable to be played because of coronavirus outbreaks at least kept three of the final round matches very much alive. With Sale gone, Wasps would only have had home advantage in the play-offs to aim for at a time of no crowds, their place in the top four guaranteed along with Bath and Bristol. The decision to postpone the Worcester match meant the three aspirants knew they had to win.

That said, Wasps were up against an Exeter side made up of seconds and thirds as the Chiefs focused on Saturday week’s European Champions Cup final against Racing 92 in Bristol. The largely youthful side resembled their seniors in terms of approach and shape, but the knowhow was lacking and as Wasps warmed up after two early Jimmy Gopperth penalties, mistakes proved costly.

And the apprentices had to contend with Dan Robson. If Eddie Jones updates his memoirs in retirement, he may explain his selection policy at scrum-half which has confounded many a commentator. Robson has largely been on England’s margins, but his ability to read play and get the ball quickly when required magnified Exeter’s errors and helped Wasps secure the bonus point they needed two minutes into the second half.

Robson’s setting of the tempo helped Jacob Umaga score the opening try of the match after 25 minutes. The outside-half made a break after swift recycling had prompted a crack in the defence and sold two dummies. He was tackled close to the line by Corey Baldwin and was facing the wrong way, but somehow contorted his body to place the ball on the line.

Robson scored the second 90 seconds later, quick to seize on the ball after Sam Maunder’s unkind pass to Don Armand went to ground on halfway. The scrum-half also showed control, a raking kick into touch inside Exeter’s 22 after a turnover a more strategic option than throwing the ball out in his own half.

It kept his side on the front foot and he was also involved in Wasps third try just before the interval, part of a passing movement that ended with Gopperth crossing on the left. When Robson seized on a loose ball in his 22 after the restart and Gopperth’s kick was hacked on by Matteo Minozzi, Josh Bassett was left with the task of picking up the ball to score. The bonus point was secured and Robson was taken off with the weekend in mind.

It ensured Wasps would finish second, something that looked improbable three months into the season, when they were languishing near the bottom of the table. They have won 12 of their last 14 matches, 10 with a bonus point, and are playing with the expression that took them to the final three years ago.

Exeter were facing the prospect of their first blank in the Premiership but three successive penalties and trademark driving mauls saw the replacement prop Danny Southworth burrow over on his Premiership debut. It did not turn the match because Robson’s replacement, Ben Vellacott, then supplied the last two tries, the first from close range and the second after an interchange between Alfie Barbeary and James Gaskell.

“It has been an incredible run,” said Lee Blackett, who took over as Wasps’ head coach in February. “Sometimes it feels like a dream because of how well it has gone and that you are going to wake up. I am proud of where we are but there is still a big job to be done.”

‘Strangest ever’ London Marathon is virtual hit with 43,000 runners

Abhishek Sharma, Priyam Garg’s knocks get SRH to 164/5 against CSK