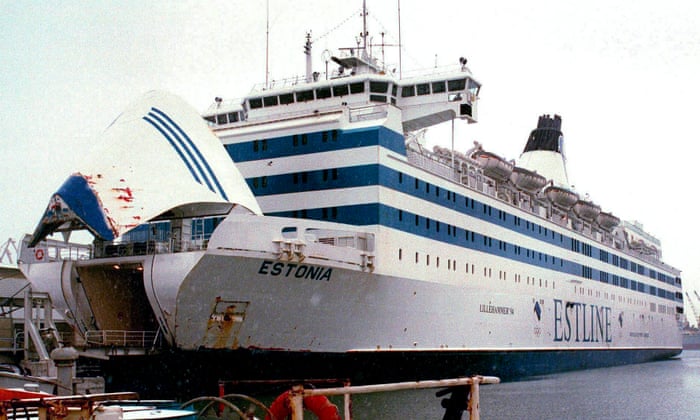 For a quarter of a century, a lack of firm evidence has prevented any real challenge to the official story of how, on a stormy September night, more than 850 people came to die in Europe’s worst peacetime maritime disaster since the second world war.

Now Henrik Evertsson may have found some. “We do not speculate, and we draw no conclusions,” the Swedish documentary film-maker said, carefully. “We are just putting facts on the table. But for 26 years now, they have said that what we have found did not exist. So it is quite big.”

At 6.30pm on 27 September 1994, the ferry MS Estonia – the largest ship then flying the flag of the young Baltic republic, and a symbol of recently regained independence – set sail from Tallinn on a routine overnight crossing to Stockholm.

On board were 803 passengers, most of them Swedish, and 186 crew, most of them Estonian. The conditions were rough – force 8 winds and waves up to 6 metres – but not unusual for the Baltic Sea in autumn. All other scheduled ferries were at sea.

At about 1am, a heavy metallic bang was heard – caused, the accident report said, by a large wave. At about 1.15am the ship’s bow visor lifted, wrenching its doors open. Water poured in; within 15 minutes, the Estonia had developed a 60-degree list.

A mangled mayday signal was sent. Survivors later described torrents of seawater pouring through cabin windows, ceilings and doors. At 1.50am the Estonia sank, stern first, in international waters about 40km south-southeast of the Finnish island of Utö.

Only 138 people were rescued, one of whom died in hospital. Most of the 852 who perished drowned, although a third of the 300-odd who reached the outer decks died of hypothermia. Only 93 bodies were ever recovered, the last 18 months later.

The 1997 report by an accident investigation committee set up jointly by Estonia, Sweden and Finland concluded that the locks on the bow visor failed, allowing it to tear free and expose the doors and ramp, which gave way, flooding the car deck. 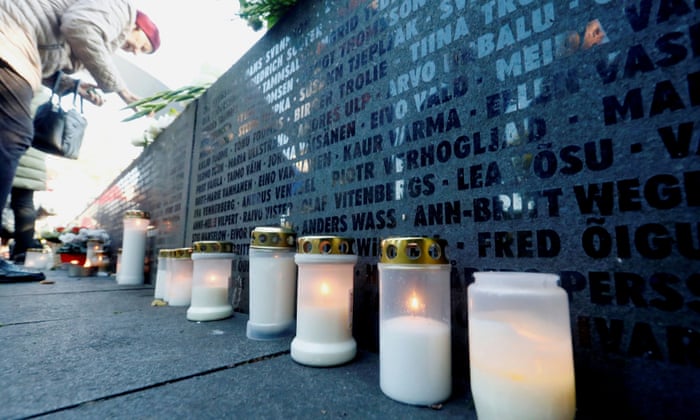 “But the surviving witnesses – whose testimony really didn’t feature in the report – were clear that it all started with that bang,” Evertsson said. “It was a bang that people felt, not just that they heard. And the ship went down so incredibly fast.”

Groups representing the victims’ families have long called for a fresh investigation, saying the bang, and the speed with which the ship sank, were consistent with a collision. Others, fuelled by evidence the Estonia had carried military equipment during that September, blamed an explosion – which two 2005 inquiries ruled out.

Resisting calls to raise the wreck and bury the dead, the Swedish government initially proposed covering the whole vessel, lying in about 80 metres of water, in a concrete shell, but eventually backed down in the face of a public outcry.

But in 1995, the governments of Sweden, Finland, Estonia, Latvia, Poland, Denmark, Russia and the UK signed a treaty declaring the site a marine grave and prohibiting any further exploration of the wreckage, on penalty of two years in prison – further stoking fears that they may have something to hide.

“We could have just reported the various theories and left it at that,” said Evertsson, who with his colleague Bendik Mondal led the team behind a new five-part Discovery Networks documentary released this week, Estonia: the Find that Changes Everything.

“But we decided the only responsible course of action was go and look. We wanted to see if there was any evidence of a collision – a hole, for example. For 26 years, the authorities have claimed the Estonia’s hull was intact, that no external damage had been observed. We decided to see.”

Hoping to avoid prosecution, the film-makers chartered a boat flying the flag of Germany – the only Baltic Sea state not to have signed the 1995 treaty – and sent down a camera attached to “a sort of underwater drone”, said Evertsson.

“We scanned the port side, from bow to stern, just the outside. We didn’t go near the inside. We saw nothing. We scanned the starboard side – and about a third of the way along, everything suddenly went dark. It was a hole, way bigger than a film frame. I mean, a huge hole: 4 metres high, 1.2 metres wide.” 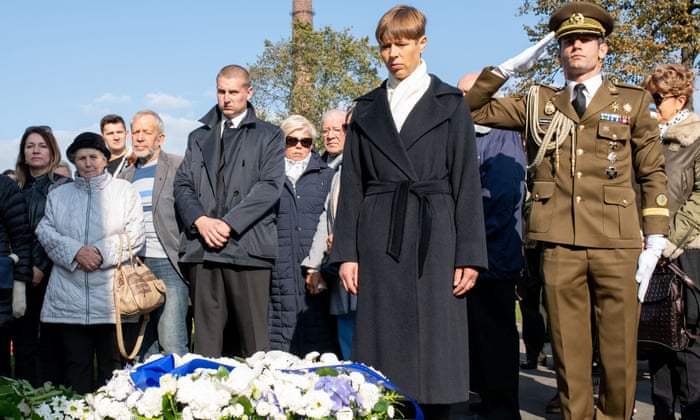 The documentary cites a Norwegian marine technology professor, Jørgen Amdahl of Trondheim University, as saying the damage – which he estimated was caused by a collision with an object weighing between 1,000 and 5,000 tonnes, travelling at between two and four knots – could have played “a major part” in the sinking.

The film-makers’ findings, made public for the first time last week, have prompted a flurry of diplomatic activity. In a joint statement, the foreign ministers of Estonia, Finland and Sweden said they had “agreed that verification of the new information presented in the documentary will be carried out”.

Finland’s foreign minister, Pekka Haavisto, said the footage appeared to be genuine, adding: “It wasn’t caused by an explosion. It would apparently take a big hit to the side of the ship to cause a hole like that – but that is all we know.”

Sweden’s prime minister, Stefan Löfven, said the country’s accident investigation board would examine the evidence. He insisted Sweden “has not lied” about the ship’s fate, and would “rule nothing out”, including new dives, of any new probe.

Estonia’s prime minister, Jüri Ratas, said the documentary’s findings “raise questions that have to be answered”, adding that his country would be taking the lead “to ensure respect for the wreck, and the transparency of the process”.

Margus Kurm is a former state prosecutor and the head of a 2007 Estonian investigation that expressed doubts about the 1997 report’s conclusion that the water had entered through the bow doors. He told local media “a collision with a submarine” could have been to blame – and suggested a Swedish sub was in the area.

For Lennart Berglund, head of the Swedish Estonia relatives association, SEA, Stockholm must now “tell us the truth”. For 20 years, he said, “we have been demanding another investigation, citing experts who say the ship could not have sunk that fast unless it was holed below the waterline. It has been consistently denied. Now we know.”

As a Swedish national, Evertsson finds himself facing prosecution in Gothenburg district court for violating a protected site. He is surprised by the charge, which he denies. “We did not disturb the grave,” he said, “and what we discovered is clearly information that should be in the public domain.”

The reaction from victims’ relatives has been overwhelming. “I have to recharge my phone four, five times a day,” he said. “They are calling from all over Europe, thanking us, many of them crying. Maybe now, they say, we will get some real answers.”

After avoiding the worst in spring, Italy’s south sounds alarm over Covid