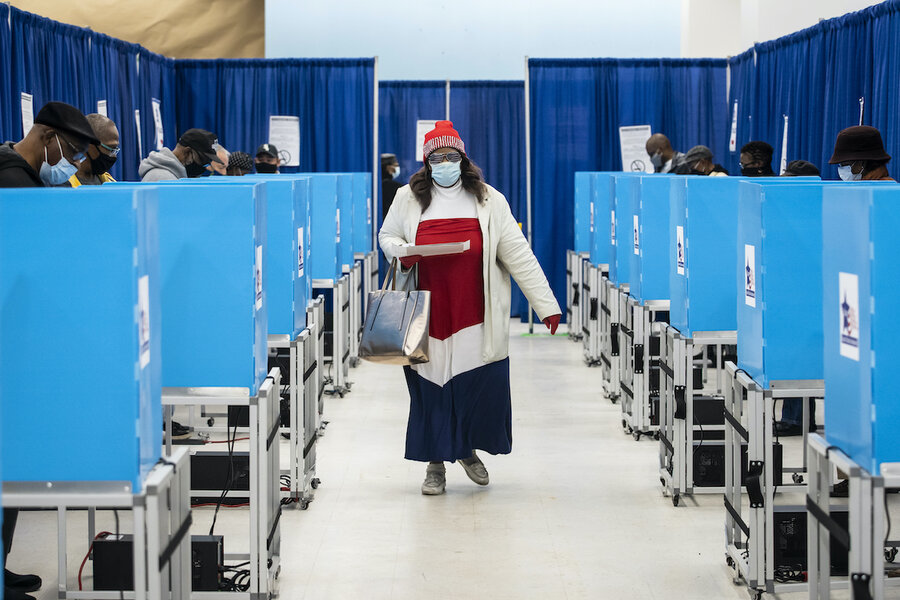 When President Donald Trump refused to outright condemn white nationalists in this week’s presidential debate and urged his supporters to monitor polling sites, Portia Roberson was reminded of earlier eras when Black Americans were intimidated at the polls to deter them from voting.

Ms. Roberson, a Black woman who lives in Detroit, found the comments chilling – but also felt a renewed resolve to vote.

For many Black Americans and other people of color, Mr. Trump’s comments in his debate with Democratic challenger Joe Biden were a harsh reminder that the nation has yet to fully grapple with systemic racism laid bare this year by protests against police killings of Black people, the coronavirus pandemic, and the resulting economic fallout.

But they were also a call to action.

“I hope that we take some of that frustration, anger, and sadness that we’ve all been feeling for the better part of 2020, and use it to motivate ourselves to go to the polls and make sure we vote and vote for candidates who really reflect what Black folks need in this country,” said Ms. Roberson, CEO of the Detroit nonprofit Focus: Hope.

Mr. Trump tried to walk back his debate comments on Wednesday, but the moment when he told one far-right group to “stand back and stand by” had already been cemented in the minds of many Americans, experts and activists say. A day after the debate, the president said he didn’t know the group but that it should “let law enforcement do their work.”

During the debate, he also urged his “supporters to go into the polls and watch very carefully because that’s what has to happen.”

“I hear the ghost of voter suppressionists past,” said Mr. Sheffield. “It’s the same soup. It’s just warmed over now.”

It’s not just Black Americans who took notice – and umbrage – at the president’s debate comments. Similar concerns are also reverberating among Americans from other backgrounds, said Anna Mach, a biracial Filipino American woman who is a master’s student at the University of Denver.

“I’m disgusted and angry and terrified by those comments,” Ms. Mach said. “But I’m not surprised.”

Since the coronavirus, which first flared in China, spread to the United States, Ms. Mach said she’s seen a surge in hate directed toward Asian Americans. Mr. Trump himself has been criticized for referring to COVID-19 as the “Chinese virus.”

“I’m worried there will be more hate crimes from white supremacists,” she said.

On Thursday, when asked for a definitive statement on whether the president denounces white supremacism, White House Press Secretary Kayleigh McEnany said that Mr. Trump had said the day before: “I have always denounced any form of that.”

Some organizations are working to transform the fears elicited by Mr. Trump’s comments into votes.

The New Georgia Project has identified about 600,000, Black, Latino, Asian American, and young voters that it wanted to encourage to vote in November, said CEO Nse Ufot. She said that doesn’t include an additional 90,000 Black voters who live in Georgia’s “rural Black belt” who didn’t vote in 2016 and who they’re also trying to reach.

“The debate was not about communicating [Trump’s] vision for America,” Ms. Ufot said. “It was about making it super unpleasant and awful and distasteful, and to encourage people to withdraw from the process, and we won’t let that happen.”

Dr. Elvin Geng, a professor at Washington University School of Medicine in St. Louis helped establish Asian Americans Against Trump, which has been funding digital and print ads in Asian-language media outlets in battleground states.

Dr. Geng hopes younger Asian Americans who don’t support Mr. Trump will talk to their relatives who do about their thinking and maybe change some minds.

“In many realms … immigrants do look to their kids for what they think, how to think about what’s happening in America,” Dr. Geng said.

While Mr. Trump’s comments – and his record on race – may have unsettled many Americans, for some Black people they evoke a particularly dark history.

The rhetoric conjured up memories of Southern segregationists and voter intimidation tactics for the Rev. Wendell H. Paris, who was involved in voting rights work in the 1960s including registration drives in Alabama and the Selma-to-Montgomery march.

“Whenever you hear him say, ‘law and order,’ that’s coded language,” said Mr. Paris. “We have reverted back to the racial situation of the 1950s and the 1960s.”

Even after the Voting Rights Act in 1965 offered greater protections, Mr. Paris recalled the way white deputies in uniform would show up at voting precincts in mostly Black areas to watch over voters – which had the effect of intimidating them given the history of racist mistreatment.

Because of that history, University of Michigan political science professor Vincent Hutchings said he believes Mr. Trump’s comments are stirring legitimate concerns that overzealous supporters will cause trouble at polling sites, particularly in Black communities.

“What sorts of things would represent violations or fraud?” Mr. Hutchings asked. “It’s very murky and so, as a consequence, people have to exercise their own discretion, and when that happens, all bets are off, so it is certainly dangerous in that regard.”

Chicago resident Cynthia Bell, who said the debate “broke my heart,” has decided to vote early out of concern over potential intimidation at the polls.

“How is this possible in this day and age?” asked Ms. Bell, who manages a senior center in her mostly Black community. “What have we gotten ourselves into?”