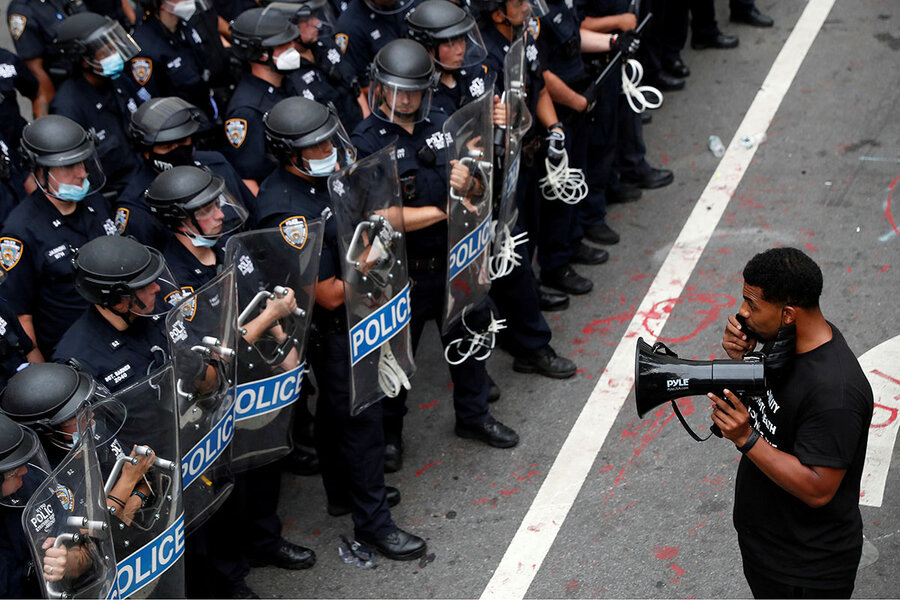 Four months after the police killing of George Floyd – and as protests demanding law enforcement overhauls continue nationwide – police reforms have surged across the country with uncommon speed.

While the depth and durability of the new policies are not yet proven, the scope of progress is wide. Since late May, states, counties, and cities countrywide have introduced a range of reform, including bans on chokeholds, increased body-camera use, and the end of “no-knock” search warrants.

“The [state] legislation that I’ve seen come through in the intervening months since May has really been unprecedented” in speed, expanse, and bipartisan support, says Amber Widgery, a policy analyst at the National Conference of State Legislatures.

She has tracked state law enforcement-related legislation nationwide since 2014 when Michael Brown was fatally shot by police in Ferguson, Missouri. Following that incident, she says state legislatures began to take active roles in policing oversight and accountability.

Most Americans, recent polling shows, support some degree of police reform. The movement’s demands are often encompassed – and blurred – by the rhetoric of “defunding police.” Whether that’s understood literally or as a gesture to the spirit of reform, what it mostly has meant in practice over the past four months is modest budget cuts, not literal abolition, The Associated Press reported.

It’s also unclear how much of the current wave of reforms will stick. Already officials are backpedaling pledges to defund the Police Department in Minneapolis, the site of Mr. Floyd’s killing May 25. And less than half of Americans (44%) think the protests will bring change for the better – though a large majority of Black Americans (71%) believe so, a June AP-NORC poll found.

“The recent protests have forced some politicians to make knee-jerk reactions and promise things that are not well thought out – such as defund the police,” Geoffrey Alpert, professor of criminology and criminal justice at the University of South Carolina, explained in an email to the Monitor.

But, he added, one benefit of the protests has been to highlight the need for systemic change: “The day of the ‘bad apple’ explanation [for police violence] is gone.”

“After Ferguson, the focus was on reforming police. It was de-escalation and body-worn cameras and implicit bias training,” says Mr. Wexler. “This post-George Floyd moment we’re in, there’s almost a sense that reform didn’t work so we have to rethink policing completely. And that’s OK.”

Whether, and how, new reforms are actually enforced are other questions. After all, the New York Police Department banned chokeholds 20 years before Eric Garner died, in 2014, when an officer subdued him that way.

“That’s why people talk about defund the police or abolish police,” says Olugbenga Ajilore, a senior economist at the Center for American Progress. “Because we’ve done legislation, but we still have these outcomes.”

There’s also the question of how to measure the impact of police reforms. Mr. Wexler says successful policing depends on whom you ask – the community, or officers, or mayors. Fundamentally, law enforcement experts say, public safety is hard to maintain without public trust.

“Without basic trust – or procedural justice – [reforms] are all compromised,” says Mr. Alpert. “We need to spend more time getting feedback from the community, having community members be part of the reform thinking and consideration.”

Here’s a sampling of police reform efforts across the country over the past decade.

Faced with rampant crime and poor finances, Camden, New Jersey, dissolved its police department in 2012. A rebooted Camden County Police Department emerged the following year, though it still only patrols the city of Camden.

Amid calls from activists to address aggressive policing early on, the department developed a new use-of-force policy in 2015 that prioritized de-escalation.

“The core principle of that policy is sanctity of life,” says Capt. Gabe Rodriguez, who, among others, was rehired from the old department. Excessive force complaints dropped from 65 in 2014 to three in 2019.

Compared with 67 homicides in 2012, there have been 17 this year, and overall crime has dropped. Mr. Rodriguez says the real measure of success for Camden’s community policing model is that more residents feel safe enough to enjoy being outside.

Critics say the transition lacked transparency and community input from the start, and the state’s top court ruled the department’s restructuring illegal in 2015. The treasurer of Camden’s NAACP chapter, Darnell Hardwick – who calls it a police union bust, not reform – says trust issues remain. And given the widespread use of surveillance technology, “it’s like a police state.”

Mr. Rodriguez says he welcomes frank discussions with the community, which is majority Hispanic and Black, and notes Camden police marched with Black Lives Matter protesters.

Volusia County Sheriff Mike Chitwood’s first six months on the job in 2017 saw six officer-involved police shootings. “You can’t control what happens on the streets at 3 in the morning,” he says. “All you can do is train, recruit, and hold your breath.”

A trip to Scotland in 2015 to study de-escalation tactics used by Scottish police had inspired him to rethink policies and training. The Volusia County Sheriff’s Office requires 40 hours of crisis intervention training classes for new hires. And with guidance from the Police Executive Research Forum, a nonprofit research and policy organization, the Florida force also implemented new use-of-force policies beginning in 2017 that emphasize de-escalation, communication, and “the sanctity of human life,” he adds.

The sheriff says these reforms have worked. Calls for service have remained relatively stable, while use-of-force incidents fell by almost half between 2017 and 2019, according to sheriff’s office data.

However, African Americans – about 11% of the county’s population – have been arrested disproportionately more than their share of residents over the past three years; in 2019, they were involved in more than a quarter of documented use-of-force incidents, NBC reported.

The sheriff’s department plans on further reforms, including a pilot initiative that would pair mental health professionals with deputies to assist people in crisis.

It’s unclear how many departments conduct implicit bias training, used to raise awareness of unconscious attitudes that could negatively impact others. But growing demand has outpaced research on its effectiveness.

Reportedly the first of its kind, a recent study examined the impact of implicit bias training on the nation’s largest police department, the NYPD, since it mandated the training for its 36,000 officers in 2018. While NYPD’s sworn personnel demonstrated an increased understanding of implicit bias, researchers weren’t able to detect training effects on actual behavior.

It’s difficult to isolate the effect of a one-day training, given many other factors affecting officers’ choices on the street, says Robert E. Worden, lead author of the study and director of the John F. Finn Institute for Public Safety in Albany, New York.

And limited research has left another fundamental question unresolved. “It’s not at all clear that the enforcement disparities that we commonly see in law enforcement are due even in part to implicit bias,” he says.

“Departments do actually invest a lot of time and money in implicit bias training, and it’s important to know whether it’s actually effective,” she says.

An NYPD spokesperson said via email that the department embraced implicit bias training for “further building trust between officers and civilians.” The force has also added ethics and de-escalation training for officers.

Colorado passed an expansive police reform bill in June, which includes a ban on chokeholds and orders local and state law enforcement to use body cameras.

And, Colorado’s new civil rights law is the first in the nation to prohibit law enforcement officers from using “qualified immunity” as a defense. Qualified immunity is a judicial doctrine that can shield public officials from litigation if they violate someone’s constitutional rights.

“If you want people to have a certain level of trust and respect for police officers, and fight back against this cops-are-the-bad-guys narrative, you must have meaningful accountability,” says Mr. Schweikert, who is involved in a bipartisan coalition against the doctrine.

Colorado’s Fraternal Order of Police President Stephen Schulz says he supports efforts to increase transparency and accountability, but opposes the loss of the qualified immunity defense under state law.

“We walk into dangerous situations on a daily basis. We have to make split-second decisions, a lot of times to protect the innocent civilians or protect ourselves,” says Mr. Schulz. “Qualified immunity was there to recognize that.”

An officer acting in bad faith, says Mr. Schulz, isn’t “somebody that we want on the street side by side with us, or protecting our communities.”

Donald Trump is back at White House – without a mask

Trump is sick. So is the GOP.