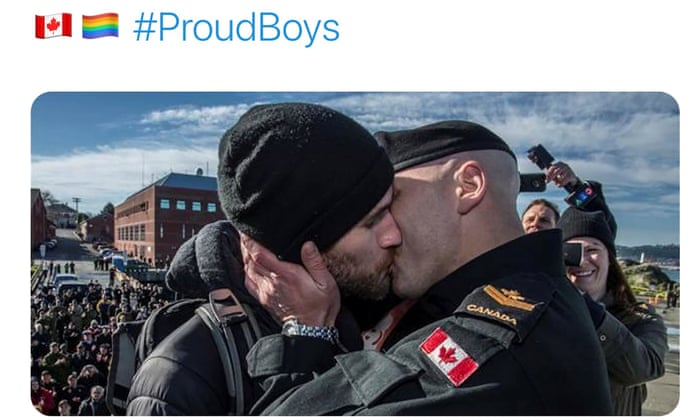 Donald Trump provoked outrage when he refused to condemn white supremacists during the first presidential debate – instead giving a boost to the far-right group the Proud Boys by instructing them to “stand back and stand by”.

But LGBTQ Twitter users have now hit back at the president’s name-check of the hate group by hijacking the hashtag #ProudBoys and filling it with photos and messages of love and pride.

The Star Trek star and activist George Takei made the suggestion on Thursday, writing on Twitter: “I wonder if the BTS and TikTok kids can help LGBTs with this. What if gay guys took pictures of themselves making out with each other or doing very gay things, then tagged themselves with #ProudBoys. I bet it would mess them up real bad. #ReclaimingMyShine”.

Over the weekend the initiative went viral with thousands of people – from politicians to TV stars and the Canadian armed forces – posting under the hashtag.

Alongside a picture of himself and his husband, Takei wrote: “Brad and I are #ProudBoys, legally married for 12 years now. And we’re proud of all of the gay folks who have stepped up to reclaim our pride in this campaign. Our community and allies answered hate with love, and what could be better than that.”

Bobby Berk, star of the Netflix show Queer Eye, tweeted a picture of himself with his husband. “Look at these cute lil #ProudBoys (#retweet and make this hashtag about love, not hate),” he wrote.

“@JerickFL and I are joining thousands of gay men on social media to reclaim #ProudBoys from white supremacists and bigoted neo-nazis,” he tweeted. “Let’s replace the hashtag with images of love, positivity, and true PRIDE! Your two favorite #ProudBoys are here standing by, ready to VOTE!”

Jon Cooper, former chair of the Democratic Coalition and a former campaign chair for Barack Obama, shared a picture of himself and his husband and children. “My husband Rob and I are two #ProudBoys. Here we are with our five wonderful children,” he wrote.

The tweet has attracted hundreds of thousands of likes.

The Proud Boys, who have no official Twitter presence since being banned from the site in 2018, reportedly took to Parler to respond to the takeover with messages of hate.