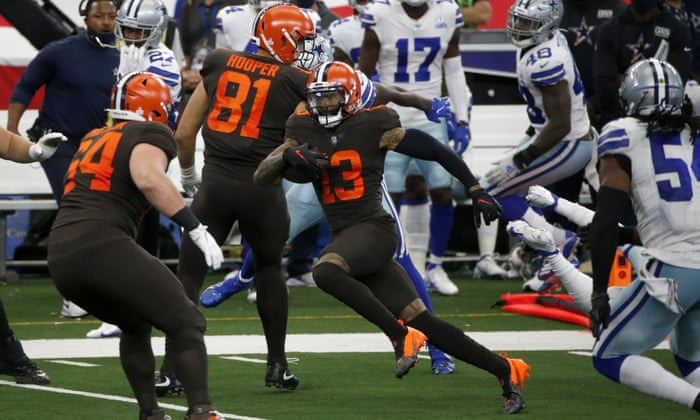 No matter how much they tried to give it away in the fourth quarter, the Cleveland Browns left Dallas with what felt like a season-defining 49-38 win.

This was the Cleveland that was envisaged when the core of this team came together a year ago: fast, creative and aggressive on both sides of the ball.

The Cleveland offense is all about movement and motion and creativity. It is, in the eternal words of Mike Mularkey, a form of exotic smashmouth. Getting the ball to the team’s best playmakers in space is the general idea, whether that’s on the ground or through the air. Nothing typifies head coach Kevin Stefanski’s approach more than wide receiver Jarvis Landry’s touchdown toss to Odell Beckham on Sunday.

Landry may be the best throwing non-quarterback in the NFL. Landry followed up his 63-yard dime from a year ago with a touchdown toss against the Cowboys. It was a laser, thrown on time, in rhythm, and with plenty of zip (why does it always look so much better when delivered on the run by a lefty?).

That last point is worth repeating: Landry rips it. When a non-QB throws the ball it’s usually a fluttery, lofted effort – the work of an enthusiastic amateur who was just about good enough to play quarterback in high school.

There’s nothing too complex about that Browns play. It is, in essence, a reverse running play with the running back handing the ball off to a wide receiver behind the line of scrimmage. Only rather than having Landry stick his head down to charge upfield, the Browns build in a passing option: there, sneaking in behind as Dallas’ defenders creep up towards the ball, is Odell Beckham.

That is StefanskiBall at its best: Movement, using creative concepts to free up his best players, and baiting the opposing defense into using its instincts against itself.

Cleveland came back to a similar look when the game was on the line: this time the ball was put in Beckham’s hands on an out-and-out reverse, and he rushed for a 50-yard touchdown.

This Cleveland – the fun, free-flowing, not asking too much of Baker Mayfield Cleveland – is an honest to goodness threat in the AFC. It’s not just on offense though. They’re rolling defensively, too.

Myles Garrett has ascended to the there’s-nothing-you-can-do-to-stop-him level. He is now up to an average of 0.86 sacks per game over his career thanks to a pair on Sunday. It was his third week in a row with a strip-sack. Garrett’s sack on Sunday edged him past JJ Watt and Aldon Smith in the sacks-per-game rankings by players who have played a minimum of 16 games. The only player ahead of him now? Reggie White. That’s a Hall of Fame trajectory.

With a raft of talent across Cleveland’s defense, it’s hard for an opposing offense to commit funky blocking schemes or consistent double teams to Garrett alone. Yet leave him one-on-one and there isn’t a lineman alive who can cope with his combination of size and speed for an entire game.

There was always more coherence on the defensive side of the ball, even in the groggiest days of Gregg Williams. Now that tenacity and creativity on defense is being matched by the offense.

With this confuse-and-clobber style, and game-breakers all over the field, everything is clicking for the Browns. A playoff spot is now the expectation, but an AFC North title bid is not out of the question. 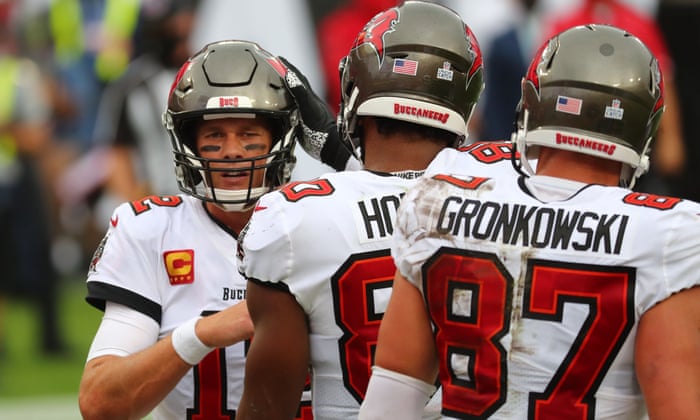 Tom Brady (43) v Justin Herbert (22) was the first time there has been a 20-plus year age gap between opposing starting quarterbacks since 1950. And both men were outstanding during the Buccaneers’ 38-31 victory over the Chargers.

“I told Anthony [Lynn] after the game ‘you’ve got a great one,’” Bucs head coach Bruce Arians said of Herbert. “That retreating play, that looked like Mahomes where we had an all-out blitz and he just kept retreating and threw a dime down the field. For rookies to make plays like that, you know they’re special.”

And it was against those blitzes that Arians mentioned where Herbert was at his best. Good NFL quarterbacks traditionally shred the blitz. When the opposition sends an extra defender, that leaves a receiver open — or it means single coverage across the board. Defenses rarely blitz the best of the best because they understand the likes of Mahomes, Aaron Rodgers and Russell Wilson can decode and find an open target easily. The Bucs tried to rattle the young quarterback by sending extra men. He stared it down and delivered enough strikes to give his team a chance to win the game.

Still: the most complete quarterback on the field was Brady. The fact that he threw five touchdowns, led a pair of vintage, got-to-score Brady drives, and outduelled Herbert at 43 is remarkable.

Josh Allen, QB, Buffalo Bills. Melissa Jacobs made this choice last week but Allen is so good at the moment he wins for a second time this season. He is a legitimate MVP candidate for the season too. You can already see the storyline coalescing: Allen leads the Bills to the first post-Brady AFC East title; his volatile style makes the Bills a Must Watch each and every week; voters continue to overlook Wilson in favour of the new fun thing. The MVP is an individual award, but you’re only a contender if you’re playing for a great team. The Bills are undeniably a defense-oriented team, but it is Allen who elevates the team’s ceiling. Does he still make goofy plays every week? Yes. But does he make up for them with moments of brilliance that few if any other quarterbacks can replicate, both with his arm and legs? Absolutely.

Allen was not flawless against the Raiders on Sunday. But he once again proved that he has eliminated the routine mistakes that dogged his first two seasons in the league while maintaining his every-down aggression. The Bills defense gives the team a solid base, but it’s Allen – this Allen; the 24/34, two touchdowns, zero interceptions, averaging 8.5 yards per completion Allen – who pushes the team to the level of a genuine contender.

To think, there was a time when people questioned the all-round ability of DK Metcalf. It’s why he slipped out of the first round. He was a sprinter, it was thought, not someone with the agility to get in and out-of-breaks or to consistently create separation. Whoops.

“He’s gonna be the face of this franchise for a long time” – Bengals defensive back Jessie Bates on Joe Burrow.

Burrow picked up his first win as an NFL quarterback, leading the Bengals to a 33-25 victory over the Jaguars. It was a win that was all about Burrow. He became the first rookie quarterback to throw for 300-plus yards in three-straight games, despite being placed behind an overmatched offensive line and with receivers dropping passes throughout the first quarter of the season. He is only a rookie, but there’s a solid argument that Burrow is already the Bengals’ best player. 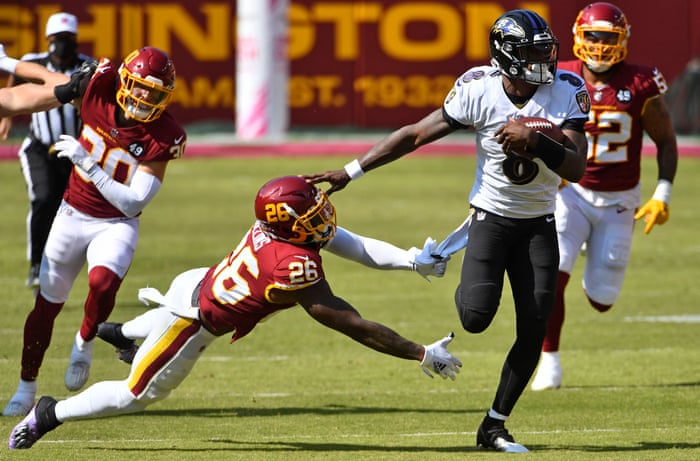 — It says so much about the excellence of Lamar Jackson that a three-touchdown, record-breaking day can feel like the 12th most important news story on Sunday. Jackson’s performance against a talented Washington defense means he has now reached 5,000 yards passing and 2,000 yards rushing quicker than any player in NFL history. He capped off the performance with his longest rushing touchdown to date.

— The Rams snuck past the Giants 17-9. It was a poor performance, but not an alarming one. Most good teams have a game or two a year in which they play down to an opponent, and you need to play way down when you’re up against the Giants. As long as this roster remains somewhat healthy – and Jalen Ramsey stops brawling – the Rams remain a contender.

— Credit to both the Lions and Jaguars even in losing efforts for their late-game strategies. Both teams opted to go for two on their first scoring effort when down 14 points in the fourth quarter. It has long been a contentious decision of whether to go for two when a team scores its first touchdown down 14 or whether to wait for the second attempt. The math is clear: going for two is the much better option. Yet coaches have long insisted that failing to get the first two-point effort saps the team of momentum. Finally, it seems like the league as a whole has figured out the right approach.

— Despite that savvy decision, it feels like the end is coming for Matt Patricia in Detroit. The head coach was already on borrowed time heading into the season; it was playoffs or bust. The Lions went up 14-0 against the Saints but gave up 35 unanswered points against New Orleans which is in keeping with an early-season trend: they gave up 21 unanswered points to the Bears in week one and 31 straight to the Packers in week two.

— Bill O’Brien officially took over playcalling responsibilities this week, ditching the “collaborative effort” that had led to an 0-3 start to the Texans’ season. As with all issues, on and off the field, the Texans answer to any problems is more Bill O’Brien. Stunningly, it did not work.

The Texans fell to 0-4 after managing just 23 points against a Vikings team that entered the week 19th in defensive efficiency. Maybe they will find further ways to empower O’Brien moving forward.