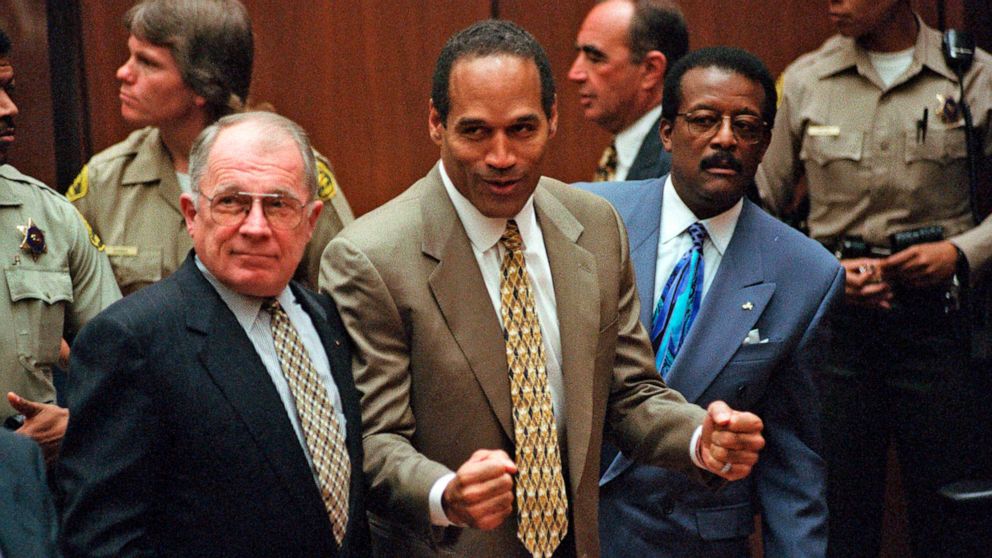 It’s been 25 years since Americans were glued to their television screens, watching a jury find O.J. Simpson not guilty in the murders of his ex-wife, Nicole Brown Simpson, and waiter Ron Goldman.

On Oct. 3 1995, the former NFL star breathed a sigh of relief in the courtroom, while the acquittal triggered disparate reactions of elation and outrage across the country.

Twenty-five years later, here’s where some of the key players in the Simpson case are now:

On Oct. 3 1995, Simpson was acquitted of all criminal charges in the grisly 1994 double murder of Brown Simpson and Goldman.

A civil jury in 1997 found Simpson liable for wrongful death and he was ordered to pay millions to the victims’ families.

In 2007, Simpson, a Heisman Trophy winner and former Buffalo Bills star, led a group of men into a Las Vegas hotel and casino to steal what he claims were his own sports memorabilia items, at gunpoint.

Simpson was charged with felonies including kidnapping and armed robbery. He was found guilty in the botched robbery in 2008 and sentenced to up to 33 years in prison.

After nine years behind bars, the former NFL player was granted parole in 2017.

He walked out of Nevada’s Lovelock Correctional Institute on Oct. 1, 2017.

Now 73, Simpson is living in Las Vegas. He’s active on Twitter, posting videos with his thoughts on politics and football.

Simpson has always maintained his innocence in the murders of Brown Simpson and Goldman.

Kim Goldman went on to become a victims’ advocate. She’s also the executive director of a non-profit which provides youth services in the Santa Clarita Valley area of Southern California.

Both Fred and Kim Goldman remain outspoken against Simpson.

“For all these years, it’s been a little frustrating that there’s been so much about this case… television series, fictional approaches, that I thought it was important to go right to the source,” Kim Goldman told ABC News last year.

Kim Goldman even talked to two jurors and said she was told the three-and-a-half hour deliberation was allegedly a cover-up.

“They corroborated what my dad and I always thought — which was that they didn’t do their job,” she said. “They pulled testimony just to cover up that they always knew what their answer was when they went into that jury room and they wasted our time for three-and-a-half hours.”

Fred Goldman says it’s important to remember the victims of violence who don’t get the publicity that his son and Brown Simpson do.

“It happens every day, and those families have the same pain that we’ve gone through and will go thorough for years to come,” he told ABC News last year. “We can’t ignore that.”

“He is a murderer. I don’t want to get my mouth dirty with his name,” Fred Goldman said. “He doesn’t have the courage, the moral backbone to admit what he did.”

Brown is now an author, a motivational speaker and advocate for domestic violence victims.

If her older sister was alive, she would have turned 60 last year.

“Sixty. What would she look like?” Tanya Brown said in a 2019 interview with Inside Edition. “But I know exactly what she’d be doing. She’d be hanging out with the kids, she’d be sending the kids to college.”

Marcia Clark had been a prosecutor with the Los Angeles District Attorney’s Office for over a decade, working on trials including the murder of actress Rebecca Schaeffer, when she was assigned the Simpson case.

After the acquittal, “I felt like I’d let everyone down,” Clark wrote in her memoir, “Without a Doubt.” “The Goldmans. The Browns. My team. The country.”

She went on to write several crime novels.

Clark also dabbled in television. She was a co-writer and executive producer of legal drama “The Fix” which aired on ABC in 2019. The show was canceled after one season.

Attorney Robert Kardashian had been best friends with O.J. Simpson for decades by the time of the high-profile case.

After Ron Goldman and Brown Simpson were found dead, Kardashian was seen leaving Simpson’s property with a Louis Vuitton garment bag which prosecutors speculated contained bloody clothing or the murder weapon. Those claims were never proved in court and the murder weapon was never found.

Simpson spent the night of June 16, 1994 — which was the night before he was expected to turn himself into police — at Kardashian’s home.

On June 17, 1994, instead of surrendering, Simpson left Kardashian’s home in a white Ford Bronco with his friend Al Cowlings, leading police on a slow-speed chase that brought Southern California freeways to a standstill. That day Kardashian went on TV and read a note that Simpson had left behind.

Kardashian joined Simpson’s legal “Dream Team,” sitting with his friend at the defense table during the 1995 trial.

Kardashian later told ABC News’ Barbara Walters, that the blood evidence was “the most devastating part of the whole trial for me.”

“I wake up in the middle of the night,” Kardashian told ABC News. “I’m so conflicted because of that blood evidence. It’s very difficult for me.”

Kardashian died in 2003 from esophageal cancer at the age of 59.

Kardashian’s first wife, Kris, and four children, Kourtney, Kim, Khloe and Rob, were then launched into stardom after their E! reality show “Keeping Up With the Kardashians” premiered in 2007. Kim Kardashian West is now estimated to be worth $900 million, according to Forbes.

Defense attorney Johnnie Cochran, then a successful Los Angeles lawyer, was brought onto Simpson’s defense team to use his way with words and charismatic personality to connect with the jury.

He famously told the jury in his closing argument — referring to the glove left at the crime scene — “If it doesn’t fit, you must acquit.”

After the acquittal Cochran went on to make guest appearances on shows including “Family Matters” and “The Howard Stern Show.”

Cochran was 67 when he died in 2005 of an inoperable brain tumor, reported the Los Angles Times.

Robert Shapiro, a celebrity defense attorney who at that point had already represented Christian Brando, was the lead counsel for Simpson until Cochran joined the “Dream Team,” pushing Shapiro to the side.

Shapiro also started a foundation in memory of his son, Brent Shapiro, who died from a drug overdose in 2005.

Simpson’s friend, Brian “Kato” Kaelin, was living in a bungalow on Simpson’s property at the time of the murders.

He was a witness for the prosecution, detailing his and Simpson’s movements the night of the crime, and his testimony made him an overnight celebrity.

In 2015, Kaelin told Barbara Walters, “In hindsight of everything, like 20 years later, I think that O.J. Simpson is guilty.”

Donald Trump is back at White House – without a mask

Trump is sick. So is the GOP.