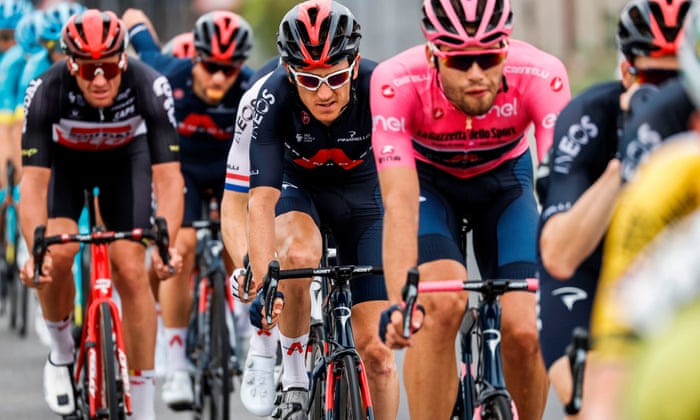 Thomas and Yates had been at the top of the list of overall contenders when the race began on Saturday morning, but the odds were being rapidly recalculated by the time they reached the top of Sicily’s volcano on what appeared a fatal day for British hopes. Thomas shipped more than 12 minutes after what appeared to be a minor crash in the neutralised zone early in the day proved to be a race-defining moment for the Welshman.

The Ineos-Grenadiers sports director, Matteo Tossato, said the crash was caused by Thomas’s front wheel hitting a rider’s bottle on the ground. “He immediately felt a lot of pain in the left leg but after the start he was better,” Tossato said.

“In the end, with 45km left, the pace went up and it was steeper so he felt pain again and preferred to get dropped and pace himself to the end, wait until after the stage finish to see the doctor.”

As the gap to the Ineos Grenadiers rider began to yawn on the 19km climb to the finish, Yates dropped off the back of the peloton as attacks were going off the front, and the Mitchelton-Scott rider eventually crossed the line 4min 22sec after EF Education First’s Caicedo.

“It was about limiting our losses,” the Mitchelton-Scott sports director, Matt White, said. “It’s a long race, everyone has a bad day. Unfortunately for us it’s early in the race. We’re looking at the race from a different angle. Now we’re coming from behind.”

Footage of the Thomas crash. https://t.co/4oXkGx86DU

The Ecuadorian had been part of an eight-man group, also including Britain’s Matthew Holmes, that had gone up the road early on, and he was able to race away from the Italian Giovanni Visconti at the summit. Caicedo’s victory was tantalisingly close to bringing him pink, and he now sits on the same time as Deceuninck-QuickStep’s Almeida. Jakob Fuglsang led the main contenders in a little under a minute down, just ahead of Rafał Majka and Vincenzo Nibali.

Thomas, who had underlined his status as the overall favourite in the race by taking time on his main rivals in the opening time trial on Saturday, took a tumble before the 150km stage from Enna had even properly started. Aside from some scuffing to his jersey Thomas look unaffected as he rode in the peloton, but as the pace picked up on the approach to the final climb, the Ineos Grenadiers rider was soon dropped.

Filippo Ganna, still in the pink jersey after his stage win on Saturday, did his best to pace Thomas back along with Rohan Dennis but they began the ascent of Etna already one minute down and the gap only grew rapidly from there.

It was a cruel end to Thomas’s hopes, three years after his last tilt at the Giro was effectively ended by a crash with a police motorbike on stage nine. Yates took pink on Etna in 2018, the first of his 13 days in the lead that year, but it was an unhappy return this time around as he too suffered significant time losses from which it will be extremely difficult to recover.