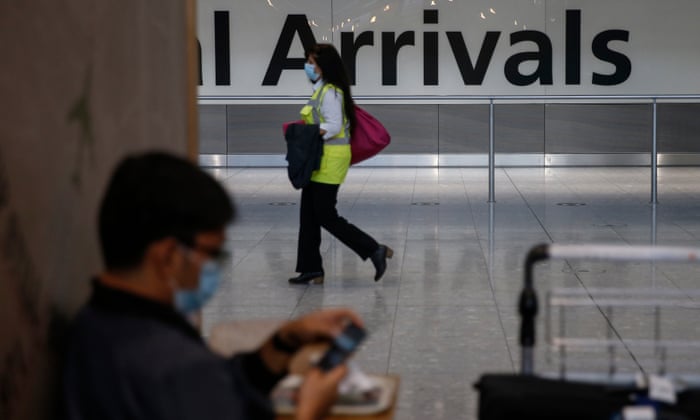 A decision on plans to introduce Covid-19 testing for international arrivals to cut quarantine times will not come until next month at the earliest, with Downing Street instead setting up a global travel taskforce to look at proposals, the Guardian understands.

After months of lobbying by the beleaguered aviation industry, which has been crippled by two-week quarantine restrictions, an announcement on whether tests for arrivals from at-risk countries would be introduced by the UK government was widely anticipated to come this week.

The transport secretary, Grant Shapps, had indicated an impending change, telling the Tory party’s virtual conference on Monday that he would be saying more shortly.

However, in a blow to the aviation industry, rather than announcing the start of testing for international arrivals, the Guardian has learned the government is instead planning to announce the launch of the taskforce – jointly chaired by Shapps and the health secretary, Matt Hancock – which has been set up at the request of Boris Johnson.

An announcement is expected on Thursday but could come sooner.

Part of its remit, which is broadly looking at ways to reinvigorate overseas travel, will be to explore options for implementing a testing regime for international arrivals to cut 14-day quarantine times. It is not due to report back until mid-November, meaning a decision on testing to cut quarantine times would not come before next month at the earliest.

A Department for Transport spokesperson insisted there was no delay over plans, adding: “As we’ve been clear, work is ongoing with clinicians and health experts on the practicalities of using testing to reduce the self-isolation period for international arrivals.”

In recent weeks, cabinet ministers are understood to have been considering whether travellers should be tested once, either five or eight days after arriving from at-risk countries, allowing them to come out of isolation earlier than the current 14-day requirement. The two options are thought to have been submitted by officials in mid-September to the Covid-19 operations committee chaired by the Cabinet Office minister, Michael Gove.

Either move would mean that initial proposals from the aviation industry for a two-test system – whereby travellers are tested at the airport on arrival from at-risk countries and again five or eight days later, with negative results allowing them to escape isolation earlier – would be overlooked in favour of a single-test approach.

Another option submitted to the government involved travellers taking a test 48 hours before their departure from an at-risk country, followed by a test on the fifth day after their arrival, also allowing them to come out of isolation earlier.

Shapps told the Conservative party conference on Monday: “The next stage is to enable testing, which people sometimes wrongly think is a very straightforward thing – ‘Why don’t you just test people at the airport? If you know they’re clear, let people in, job done.’

“The answer is that in someone who is asymptomatic, not displaying any symptoms, that won’t find a very large proportion of cases. In fact the studies show that if you check somebody on the first day that they arrive, you will probably just find 7% of people who actually do have the virus.

“So we have got to be a bit smarter than that. The way to do that is to still have a period of quarantine but also test and be able to release people. I will be saying more about that shortly.”

Shapps has also highlighted that any testing for international arrivals must be paid for privately. “If you are a holidaymaker you don’t want to be taking up an NHS test because you have flown somewhere, which is a discretionary thing to do,” he told the i newspaper. “Anything that we do with testing at airports or testing a week later must be done through private capacity.”

Exemptions were brought in a month later with the creation of “travel corridors” for destinations with low Covid-19 rates. However, flights and travel were thrown into chaos by sudden changes to the status of major tourist destinations, such as Spain and France, during the summer season. From last Friday, people arriving from abroad who breach Covid-19 quarantine restrictions in England face tougher fines of up to £10,000.

The aviation industry has been largely rebuffed in appeals to the government for a special package of assistance for the sector. The Treasury has limited its help to the broader furlough scheme and Covid-19 loans from the Bank of England, while tens of thousands of jobs have been lost across airlines and airports.

Ministers announced the creation of a special aviation “restart, recovery, and engagement unit” at the start of May, but the Commons transport select committee expressed concern about the lack of pace or detail of any action. Five weeks ago the government responded that the unit would report in the autumn.

Ozone hole over Antarctica is ‘largest’ and ‘deepest’ it’s been in years, researchers say