Beijing has been fiercely critical of the group describing it as a “exclusive clique”.

On Twitter Mr Pompeo commented: “Looking forward to discussing increased cooperation to promote our shared vision for a free and open #IndoPacific, composed of nations that are independent, strong, and prosperous.”

In response to the meeting Wang Wenbin, a spokesman for the Chinese foreign ministry, said: “We hope relevant countries can proceed from the common interests of countries in the region, and do more things that are conducive to regional peace, stability and development, not the other way around.”

China has clashed with a number of its neighbours, as well as rival regional powers, over territorial disputes during the past few months. 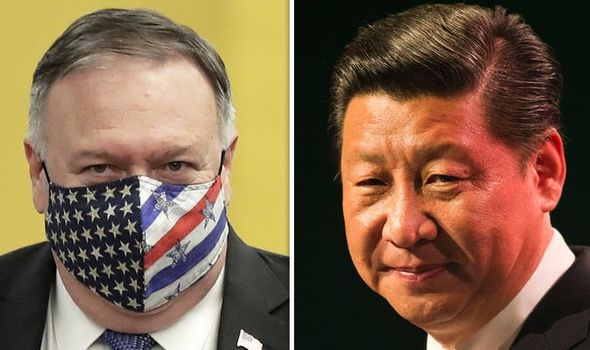 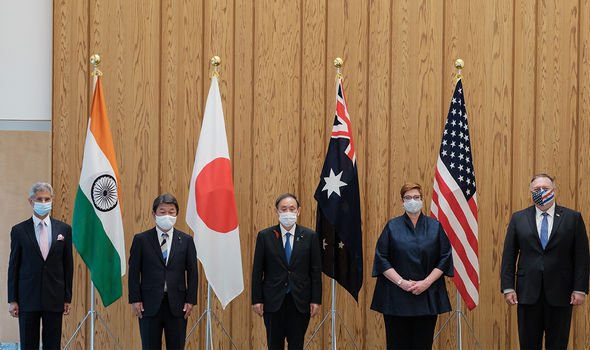 In June 20 Indian soldiers were killed in hand-to-hand fighting with their Chinese counterparts in the disputed Ladakh territory.

The two sides fought with metal bars, clubs and rocks as firearms have been banned close to the border.

However, just months later both China and India accused the other of firing live rounds during a second border clash, though there were no reports of casualties.

Many of the Indian dead either drowned or died from exposure after being wounded. 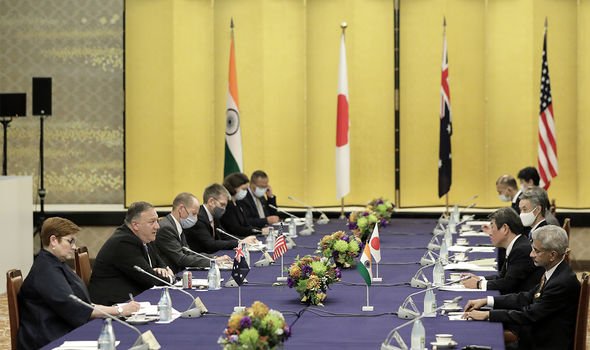 There were reportedly also a significant number of Chinese casualties, but Beijing hasn’t released an exact figure.

Beijing is also in dispute with a number of its neighbours over control of the South China Sea.

China’s claim of sovereignty over this region overlaps with rival claims from five of its neighbours. 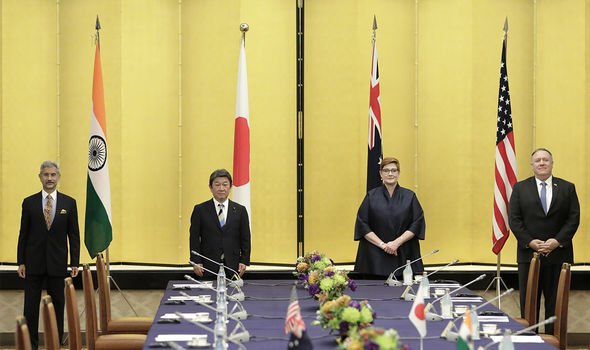 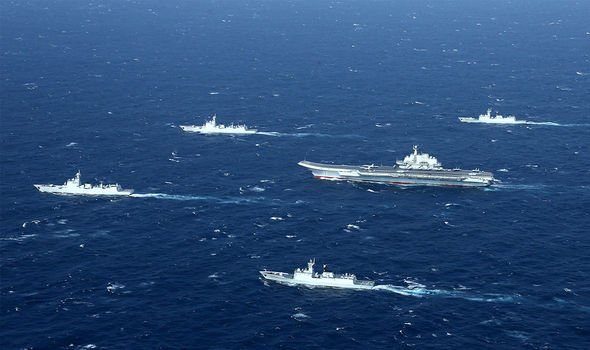 The United States, and other western powers, reject the Chinese claim and have been sending warships on ‘freedom of navigation’ patrols through the contested territory.

China’s relations with Australia have also deteriorated sharply since the Australian Government demanded an independent investigation into the origins of COVID-19.

In response Beijing has imposed economic sanctions and in September expelled the last two Australian media reporters in China from the country.

According to Alexander Neill, an Asia-Pacific security expert working from Singapore, The Quad is becoming more influential as an alliance due to “India’s buy in”.

He explained: “In recent years there has been much speculation about the quad becoming a formalised body.

“But it had been constrained by India in particular, which is a traditional stalwart of the non-aligned movement.”

The Quad was formed in 2007 but has become increasingly active in recent years as China’s relations with many of its neighbours have deteriorated.

China has also been clashing with the United States over trade, Beijing’s treatment of its Uyghur minority and Hong Kong. 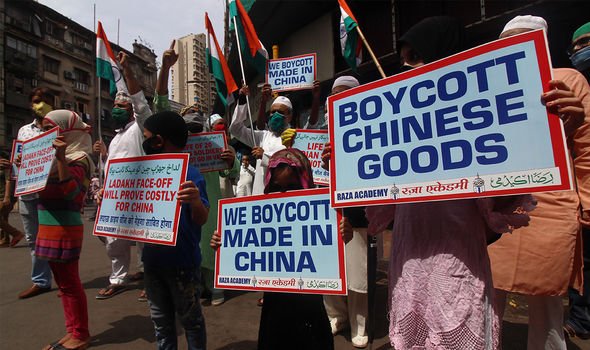 Up to a million Uyghur Muslims are believed to be being held in Chinese ‘re-education camps’, where there have been reports of abuses such as torture and sexual violence.

Earlier this year Beijing imposed new security laws on Hong Kong, a former British colony, stripping the city of much of its autonomy.

In response the UK said any Hong Kong resident entitled to a British Overseas Passport, which includes all those born in the territory prior to 1997, could move to Britain with a pathway available to full citizenship.

No Covid testing decision for arrivals before November, UK to announce

Ozone hole over Antarctica is ‘largest’ and ‘deepest’ it’s been in years, researchers say