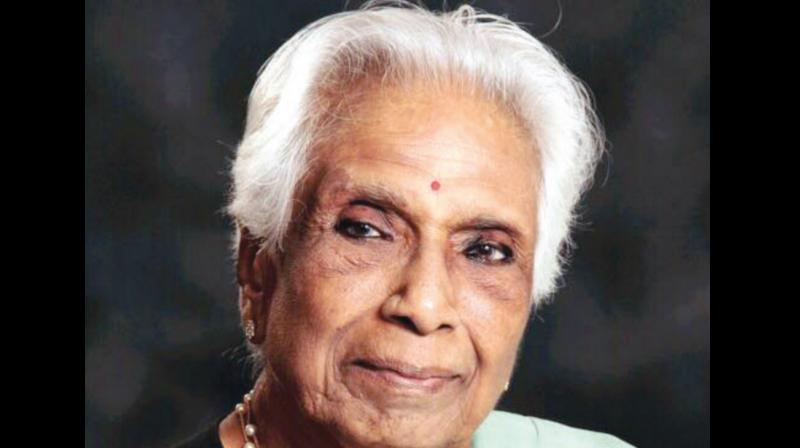 Hyderabad: At 98, Shakuntala Patnaik has lived through two world wars, India's freedom struggle and many health crises including plague and small pox outbreaks. Ask her about the current COVID-19 pandemic, and her answer is emphatic: “India never had dangerous diseases… they all came from foreign lands.”

In an interview with Deccan Chronicle, Patnaik had no time for people who crib about the boredom of being confined at home by the coronavirus. “No one in my generation ever felt bored or depressed during a quarantine,” she said.

“Today's generation have lost the thread of family bonding, which is why they feel suffocated at home during the lockdown.”

Mrs Patnaik lives alone since she lost her husband in 2000. Her three sons and a daughter have all retired. She has 12 grandchildren and five great-grandchildren. “I am healthier than my children,” she says.

Her first experience with epidemics was when she was in fourth class. It was an outbreak of the plague. “It spread rapidly. Army families were put into quarantine and rations were supplied by the Army.”

Then when she joined college, there was smallpox. “The only treatment was to wear white clothes. Turmeric was applied on the sores and patients had to sleep on neem leaves. Those not infected were made to take a bath with water boiled with neem leaves.”

When she graduated from Maharani College, Bengaluru, World War II broke out. It was her father’s wish that she become a doctor and she went to study in Patna. After struggling for two years in conditions hostile for women, she returned home.

Between 1939 and 1940, tuberculosis spread in several parts of the country. Shakuntala was in Madras, where she saw isolation hospitals coming up. “Houses were cleaned and disinfected with cow dung.”

In 1944, she completed teacher training in Rajahmundry and joined the Maharaja Parlakimidi Girls High School. She married Dr P.B. Patnaik, a professor of mathematics at Presidency College in Madras in 1946.

After Independence, he joined the Indian Statistical Institute and subsequently, the Planning Commission as one of India’s earliest statisticians. When Andhra Pradesh was separated from the Madras Presidency, he became director of the Bureau of Economics and Statistics.

When Dr Patnaik joined the United Nations in 1963, Mrs Patnaik joined her husband along with their daughter and younger son. They were based at Jakarta.

And a flu epidemic broke out there. Once infected, patients died in seven days. The family, along with others, were shifted to the island of Sulawesi where they were quarantined for six months. Two of her children were back in India and to communicate with them she had to write letters or visit a post office to book an international trunk call. Sometimes, after waiting for hours, she would get lucky and get connected.

In 1971, after retirement in Taiwan, the family turned to Hyderabad. Dr Patnaik died in the year 2000.

Speaking of the Covid-19 pandemic, Mrs Patnaik said, “Fear has gripped people's minds because of access to communication. Along with information, misinformation is being spread and this is creating paranoia.”

Hamilton, The Old Guard and Birds Of Prey among People’s Choice Awards nominees

This will not be the last pandemic, warns WHO chief