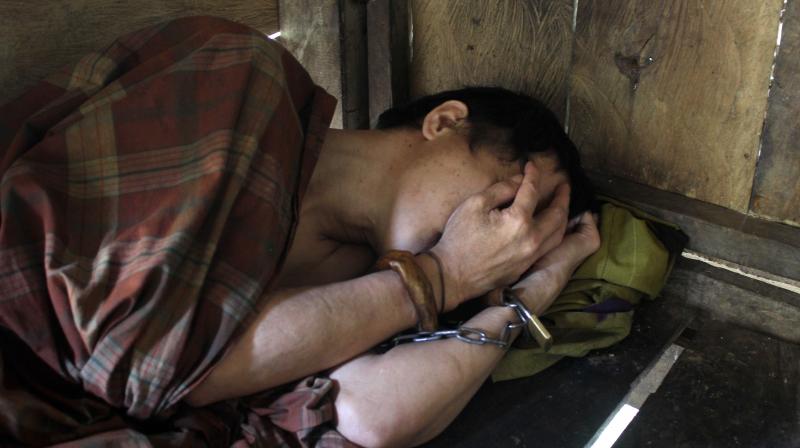 Polewali: Locked up all day in a tiny, squalid hut with barely enough space to lie down, Rauf is a prisoner to his mental health issues and carers whose only way of coping is to shut him away.

While not unique to Indonesia, padlocks, shackles and chains are frequently used to cover for a lack of proper mental health provision in the world's fourth most-populous nation.

But the coronavirus epidemic has exacerbated the problem, forcing many people back into chains after they had been freed following a change in attitudes, and access to medication and better care.

Rauf, 40, spent decades in shackles until a few years ago, when he was finally allowed to wander on his own — usually to his favourite place, a crowded market.

The virus has forced the return of old methods, however, and he is once again shackled and locked in a cramped backyard hut where he eats, sleeps and defecates.

"We don't want him to be infected by the virus as we learned that things are now getting worse," said Hasni, Rauf's aunt who looks after him in Polewali in West Sulawesi.

She also worries that virus lockdowns could restrict Rauf's access to medication, and fears he could harm himself or others.

Locking up people with mental health conditions used to be common in Indonesia — particularly among families who could not cope or afford appropriate care.

Foreign tourists in Bali would often be shocked to discover someone chained to a tree in an otherwise picture-perfect village.

A national campaign helped thousands to gain better access to mental health treatment and medication, and experts believed they had turned the corner — until the virus struck.

"This is the tragedy with the pandemic that it is happening in so many countries including across Indonesia," said Kriti Sharma, a senior disability rights researcher for Human Rights Watch (HRW).

In a report released Tuesday entitled "Living in Chains: Shackling of People with Psychosocial Disabilities Worldwide", HRW documented hundreds of thousands of people with mental health issues — some as young as 10 — being confined for years.

Psychosocial disability — when a mental illness interferes with a person's ability to function — can arise from any mental health issue if the impact on their life is severe enough.

The report was released ahead of World Mental Health day on Saturday.

Cases of shackling were either gathered by field workers, reported by locals, or shared by relatives unable to cope.

"It is a practice that is widespread, brutal and an open secret in many communities," Sharma said.

Indonesia's health ministry — which has registered nearly 300,000 people as experiencing mental health conditions — said it had recorded more than 6,000 "shackling" cases in the first half of the year, a rise of more than 1,000 on the whole of 2019.

"The number could double if the pandemic continues," said Siti Khalimah, the director for mental health affairs at the ministry.

Describing the latest figures as the "tip of the iceberg", she said many more cases were likely to go undiscovered because of shame or social stigma.

Mental health services had been severely hampered by coronavirus lockdowns, she added, with patients unable to visit clinics, or medical workers travel to communities.

'We have no choice'

Sodikin, 34, was released in 2016 after spending more than eight years in chains in Cianjur, West Java.

A combination of medication and proper advice meant his progress was astounding, and in 2018 he started work at a clothing factory — becoming a breadwinner for the family.

But he is now locked up again after coronavirus restrictions cost him access to medication and community-based mental health services.

"He was fine for years, but since the pandemic he became uncontrollable," Sodikin's older brother Mustafa told AFP.

"We have no choice but to lock him up. If he is taking drugs he is fine, but if he is running out he becomes uncontrollable.

"We don't have money to afford proper medication."

In West Sulawesi, another patient — father-of-four Ahmad, 38 — was asleep in a shed with his feet and hands chained when an AFP reporter visited.

"We don't have any money for treatment," said his brother, Nurdian. "Even before the pandemic we were struggling… now the situation is even more difficult.

"This way we can carry on working our fields without having to worry about him," he added.

"We are sad seeing him chained like this, but it is the only option we have."

Taiwan says military under pressure from China as missions mount