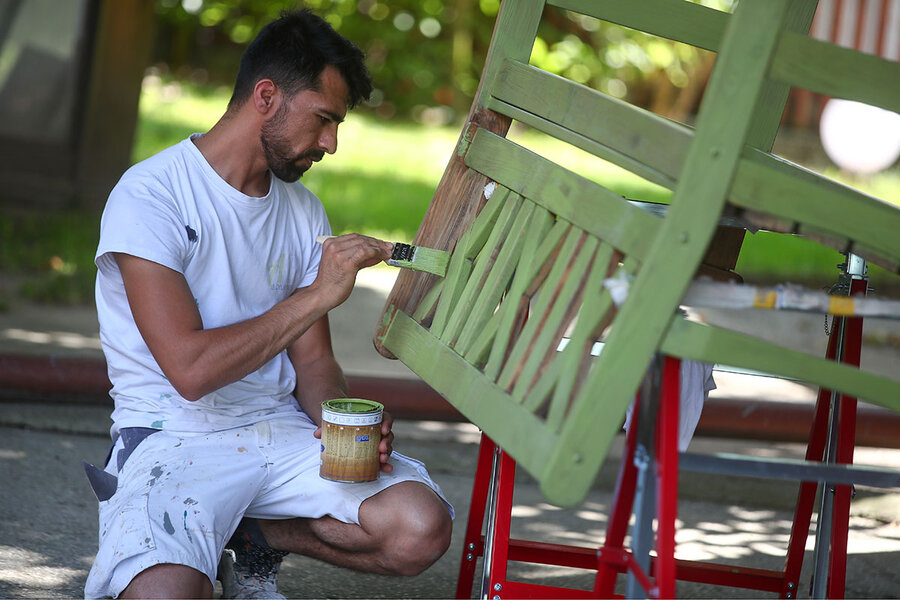 From his new home in Berlin, Khalil Sharaf recalls the war-torn town of Daraa in Syria that he fled in 2015: the crash of bombs, regular street battles, the seemingly random arrests of neighbors.

One day the police came for him – he was an outspoken lawyer – and threw him in jail. He spent a traumatic month in a jam-packed basement cell watching people around him suffocate to death every day from overcrowding.

“Every human has 2 feet and there wasn’t even enough space for that,” says Mr. Sharaf. “We carried kids on our shoulders so they could breathe.”

But he was one of the fortunate ones. Eventually, he made it to Germany, and today, five years after Chancellor Angela Merkel opened her country’s doors to a flood of refugees like him, Mr. Sharaf has put down roots. He has been granted political asylum, learned to speak German, found a job helping other refugees integrate, and been reunited with his wife and children.

Though he has experienced hardships peppered with false starts, his story, and countless others like it, illuminate a pattern of success in fitting more than a million refugees into Germany’s everyday economic and social life.

“My kids are in school now. They speak German. They have so many friends,” Mr. Sharaf says. “I have German friends. Me and my work colleagues, we are like family.”

To be sure, a far-right political party won seats in parliament in part by riding a backlash against the largest flow of refugees Germany had seen since World War II. And the coronavirus pandemic has challenged refugees just as they were getting on their feet.

Yet, five years on, roughly half the new arrivals have quietly found work as armies of German volunteers assist the rest with everything from language classes to finding jobs and housing.

“Compared with Germany’s 1990s intake of migrants from the Balkans, this integration is more successful, longer term, and more sustainable,” says Ulf Rinne, an economist with the IZA Institute of Labor Economics, a private research group in Bonn.

“We have a split society, but the group that welcomes refugees is in the majority,” adds Dieter Filsinger, a sociologist at Saarland University of Applied Sciences. “We’ve seen an unprecedented rise in volunteerism, and so much engagement from communities and from individual Germans,” Dr. Filsinger says, referring to the Willkommenskultur (welcoming culture) that has become part of Germany’s lexicon.

Ursula Breidbach began teaching German classes for new arrivals back in 2015. The Berliner also collected and distributed food and clothing to refugees from her comfortable home in a quiet, upper-middle-class suburb.

Ms. Breidbach is typical of “the people who were always two steps ahead of the politicians,” says Günther Schulze, whose neighborhood “refugee welcome alliance” enticed Ms. Breidbach to join their ranks. “The ones who are against refugees are loud and are heard. The quiet people doing the work are the really important ones for our society.”

Every week, Ms. Breidbach taps a wide network of acquaintances to “find the right people with the right answers,” she says. This network helps with everything from visa and legal advice to assistance finding housing. Sometimes, a new arrival simply needs a friend.

“They’ll say, ‘I’d like to find new friends to practice my German,’” says Ms. Breidbach. “So I send out an email, such as ‘Here’s Ayisha and she’s 21, from Afghanistan, and she likes swimming.’ Someone raises a hand and says, ‘I like swimming too, I’d like to meet her.’”

“In the best case, they become friends.”

Learning from the past

Thousands of such volunteers have emerged across Germany, adapting their services to meet the changing needs of the new arrivals. Refugees who arrived in 2015 who have managed to secure permanent status in Germany are no longer living in gyms and struggling to find their bearings; they are confronting next-level needs and wants.

The volunteer army has itself morphed, too, from “a lot of fantastic elderly ladies in the beginning distributing clothes and so on,” says Mr. Schulze, “to a lot of younger people now who have their own ideas. They’re also more political.”

The German government also learned from the Balkans experience that institutional language-learning support is critical; asylum programs now pay for or subsidize 600 hours of German classes and a 60-hour course teaching German law, society, and culture.

Ammar El Halabi, who was imprisoned twice for demonstrating and speaking out against Syrian President Bashar al-Assad, was one of the beneficiaries of such a program after arriving in Germany in 2012.

A former soldier who also trained as a baker, he worked odd jobs for a few years while he got the hang of the language. “It was like being a child and learning to walk when I got here,” he remembers.

After a few failed attempts to get on his feet, he is now fluent in German and has opened a bakery in Neukölln, a district of Berlin known for its international feel. He sells Syrian-style baklava and other sweets, which he proudly says “contain less sugar than the Turkish version.”

When asked, eight years after his arrival, how he’s settling into his new life, Mr. Halabi doesn’t sugarcoat his words. There have been challenges. But look at the plight of Syrian friends who emigrated to the United States, he points out.

“They aren’t doing well,” he says. “They always have to work under the table and do terrible jobs. They don’t really get much support.”

Even in Germany, with its warm volunteer embrace and government aid, a lot of refugees are still struggling to make their way. Many are working in unskilled jobs or professions other than the ones they were trained for. They can also come up against racism and discrimination, says Dr. Filsinger of Saarland University.

“Migrants who have the exact same grades and experience as Germans have a much harder time getting employment than Germans,” he says.

Mr. Sharaf remembers his battle to find his feet those first years in Berlin. “I didn’t speak anything,” he says. “So I started practicing [German] with YouTube and with people on the street.”

Hard-pressed to find work, the trial lawyer turned to building playgrounds as a volunteer. “This was super strange because I’m not a construction worker,” he laughs. “But I get it. I can’t just jump back into being a lawyer again. So, I said, ‘who cares!’ And I built this playground.”

Now he has a paying job, helping refugees like himself make their new lives in Germany. His wife and young son – who required therapy to overcome a habit of hiding under beds from the trauma of hearing bombs – have joined him in Berlin. An English teacher back in Syria, his wife is working to become an educator in Germany. Volunteers helped them find an apartment, and the couple has had another child.

“In the beginning, they thought we are coming just to sit and sleep and take money,” he says. “Then they see we are engineers, lawyers, doctors just like them. We want to work. I miss a lot in Syria, but I feel 50% at home in Germany.”