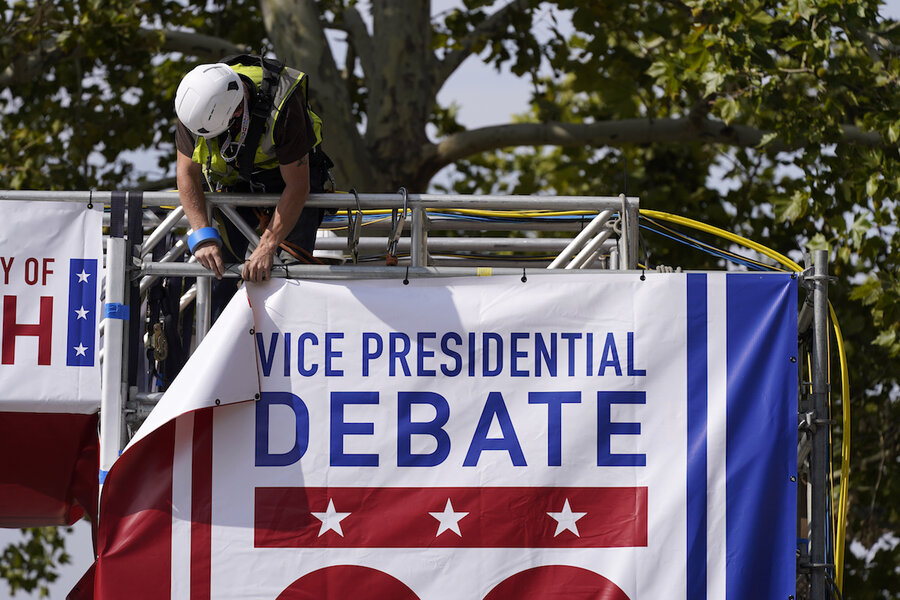 This week’s vice presidential debate has taken on an outsized and perhaps unprecedented significance, with questions about President Donald Trump’s health now looming over the election less than a month away.

Vice President Mike Pence’s sole face-off against Sen. Kamala Harris, Democratic nominee Joe Biden’s running mate, scheduled for Wednesday in Salt Lake City, comes as the Trump campaign reels from a COVID-19 outbreak that has infected not only the Republican president but several in his inner circle.

The pressure on Mr. Pence, who often toils in Mr. Trump’s deep shadow, is great. Mr. Trump trails Mr. Biden by 10 percentage points nationally, according to a new Reuters/Ipsos poll, with voters faulting what they viewed as the president’s carelessness about the pandemic.

Mr. Pence needs to show the public he is ready to step in as president if the situation requires, while also defending the Trump administration’s handling of a 7-month-old health crisis that has killed nearly 210,000 Americans.

For her part, Ms. Harris, who has largely stayed out of the spotlight in recent weeks as Mr. Biden ramped up campaign travel, must demonstrate to voters that she, too, could assume the presidency if needed at some point in Mr. Biden’s tenure should he win the election.

“This debate is different,” said Christopher Devine, an expert on the vice presidency at the University of Dayton. “Some people may be worrying about Mike Pence and how he may perform if called upon. And there are questions about Joe Biden’s ability to stay healthy.”

Mr. Trump returned to the White House on Monday following a three-day stay at Walter Reed National Military Medical Center where he was treated for his illness. While doctors say he is recovering, it remains uncertain when he will be able to resume campaign activities.

Trump campaign spokesman Tim Murtaugh said on Monday the president intended to participate in the next scheduled debate with Mr. Biden on Oct. 15 in Miami.

Mr. Pence will also be charged with trying to slow the Biden-Harris momentum, something Mr. Trump was unable to do in his unruly debate with Mr. Biden last week. Mr. Trump struggled to make a case for his re-election and often resorted to insults to try to rattle Mr. Biden.

Mr. Pence, a talented and even-tempered communicator who once hosted a radio show while a member of the U.S. House of Representatives, can be more effective on a debate stage than the undisciplined Mr. Trump, said Michael Steel, who worked with Mr. Pence in the House when Mr. Steel was an aide to then-Speaker of the House John Boehner.

“The vice president can make a more cogent and thoughtful case for the Trump administration’s record than almost anyone else,” Mr. Steel said. “He’s in a position to have a much stronger debate than the president.”

But, Mr. Steel added: “I don’t know how much that matters.”

Reuters/Ipsos polling has shown the presidential race to be relatively stable, with Mr. Biden consistently holding a lead nationally and a small set of undecided voters who have yet to make up their minds. More than 3.8 million Americans already have voted ahead of the Nov. 3 Election Day, according to the University of Florida, which tracks the early vote.

A Biden campaign official told Reuters the campaign was prepared for Mr. Pence to launch attacks on Ms. Harris suggesting she is to the left of the mainstream of the Democratic Party, along with other allegations that Mr. Biden’s campaign says are untrue about his son Hunter Biden and Mr. Biden’s stance on China.

The official conceded that Mr. Pence was a strong debater, but “just because Mike Pence can deliver a line doesn’t make it true.”

Ms. Harris, a former Democratic presidential contender, cemented her reputation as a skilled questioner at the 2018 hearings for now-Supreme Court Justice Brett Kavanaugh. She will “make a very forceful case” that Mr. Biden is the right leader for the moment, the Biden official said.

Ms. Harris has panned the administration’s coronavirus response headed by Mr. Pence. On Wednesday, she will have to thread the needle between renewing those criticisms without attacking the recovering Trump personally, Mr. Devine said.

“It’s a delicate balance,” Mr. Devine said. “Harris is probably better prepared than most, having been on the national stage before.”

During a series of primary debates last year, Ms. Harris had to navigate how to take shots at Mr. Biden, a beloved party statesman, without alienating swaths of Democratic voters. Her criticism of Mr. Biden’s past record on forced school busing earned her media attention but may have backfired with the electorate. She ended her campaign in December.

Coronavirus protocols at the debate on Wednesday will be strengthened following Mr. Trump’s diagnosis.

Mr. Pence and Ms. Harris will be seated more than 12 feet apart on the stage, farther than the 7 feet that separated the lecterns at the Sept. 29 debate between Mr. Trump and Mr. Biden. The candidates will also be separated by a plexiglass barrier during the debate, as requested by the Biden campaign.

All debate attendees, including members of the media, will be required to get tested for COVID-19. The debates commission said anyone not wearing a mask would be “escorted out.”

Masks were mandatory at the Cleveland presidential debate venue, but some people, including members of Mr. Trump’s family, could be seen removing them.

For those reeling from Covid losses, Trump comes across as boastful, insensitive

How a president and pandemic intertwined