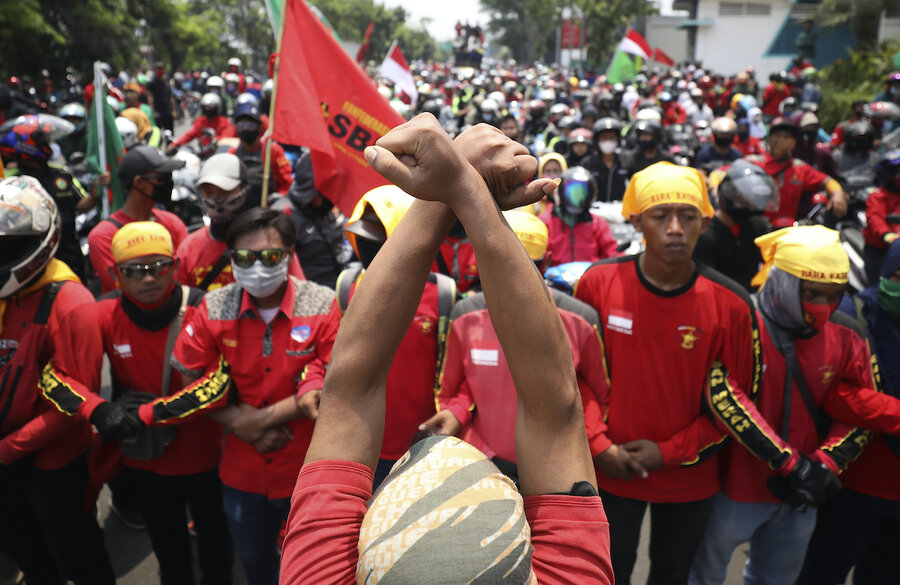 Thousands of Indonesian students and workers protested on Wednesday against a new law they say will cripple labor rights and harm the environment, with some clashing with police.

The new Job Creation Law, which was approved Monday, is expected to bring radical changes to Indonesia’s labor system and natural resources management. It amended 79 previous laws, including the Labor Law, the Spatial Planning Law, and Environmental Management Law.

It is intended to improve bureaucratic efficiency and cut red tape as part of efforts by President Joko Widodo’s administration to attract more investment in the vast archipelago nation, home to more than 270 million people. Supporters of the law say it will increase employment at a time when a recession looms and when Indonesia is competitively falling behind other Southeast Asian countries.

Seven parties in the House of Representatives approved the legislation while two others rejected it, with their members walking out of the plenary session.

Authorities in Bandung, the capital of West Java province, blocked streets leading to the local parliament building and city hall, where clashes between rock-throwing students and riot police broke out late Tuesday when police tried to disperse the protesters.

On Wednesday, more than 3,000 protesters, including workers and high school and university students, attempted to reach the heavily guarded parliament building. Protesters set fires to tires near blocked streets and pelted police with rocks and gasoline bombs and broke down a gate of the parliament compound. Riot police responded by firing tear gas and water cannons.

Smaller protests also occurred in other Indonesian cities, including in Jakarta’s satellite cities of Tangerang and Bekasi where large factories are located, and many cities on Sumatra and Sulawesi islands.

National Police spokesman Argo Yuwono said riot police used only tear gas and rubber bullets in dispersing the protesters. He said authorities are still investigating the violence in Bekasi in which both students and police were injured.

Mr. Yuwono urged protesters to convey their views in an orderly and good mannered way, and always wear masks to prevent the spread of COVID-19.

Thousands of workers from factories in Karawang, in West Java, and Serang, in Banten province, also protested outside their factories.

Police in the capital, Jakarta, prevented labor groups from holding a mass rally in front of Parliament.

KSPI President Said Iqbal released a statement saying the new law will hurt workers, including by reducing severance pay, removing restrictions on manual labor by foreign workers, increasing the use of outsourcing, and converting monthly wages into hourly wages.

“We reject the entire contents of the omnibus law which is very detrimental to workers,” Mr. Iqbal said. “It must be canceled immediately. The workers are already suffering a lot from the COVID-19 crisis.”

Some academics from prominent universities also expressed disappointment on Wednesday over a law they said was problematic and would likely lead to a judicial review.

Susi Dwi Harijanti of Bandung’s Padjajaran University said the law’s swift passage “shocked everybody” because parliament was usually “slow in making regulations, including the ones that are clearly needed by the people,” according to Reuters.

Indonesia, Southeast Asia’s largest economy, is eagerly courting foreign investors as key drivers of economic growth in a nation where nearly half the population is younger than 30.

Top economic minister Airlangga Hartarto on Wednesday sought to calm protesters and said many of their fears were based on false information, according to Reuters.

“I can assure you wages will not be cut,” he told a virtual news conference.

The Jakarta Post reports that the “government and lawmakers have also agreed to lower maximum severance pay for laid off workers and introduce a new unemployment fund (JKP), which effectively means the government will shoulder part of the company’s cost when they lay off their workers. According to the law, employers could pay a maximum of 19 times the monthly salary, and an additional six times the monthly salary will be paid by the government through the JKP scheme.”
Other ministers have defended controversial provisions, including a land bank, saying the government would not take away farmers’ lands and the law would not weaken environmental protection, reported Reuters.

Last year, Mr. Widodo told The Associated Press that he will push ahead with sweeping and potentially unpopular economic reforms, including a more business-friendly labor law, in his final term because he is no longer constrained by politics.

“In the next five years I have no political burden so in making a decision, especially important decisions for the country, in my opinion it will be easier,” Mr. Widodo said.

Taiwan says military under pressure from China as missions mount