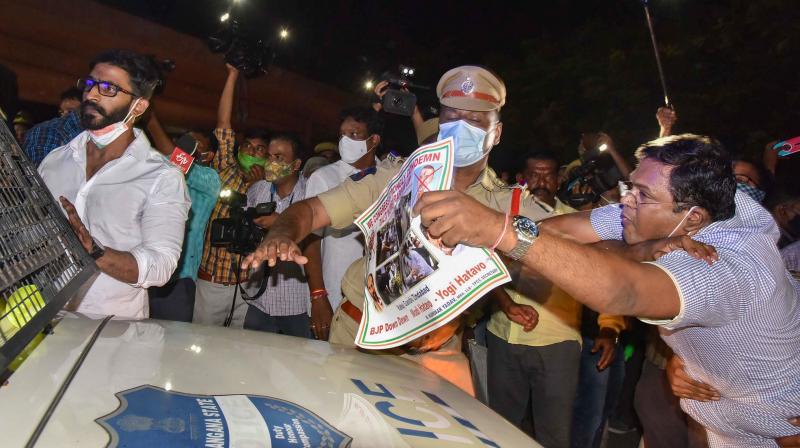 Tension prevailed at Gandhi Bhavan and Tank Bund in Hyderabad on Thursday evening with the flash protest of Telangana Congress leaders condemning the detention of Congress leaders Rahul Gandhi and Priyanka Gandhi and also demanding death punishment to the accused of Hathras gang rape case.

The Hyderabad police arrested TPCC chief Uttam Kumar Reddy and others at Tank Bund  and Congress working president A Revanth Reddy and other leaders at Telangana BJP office in Nampally of the city.

In the evening the Congress leaders and workers led by TPCC chief and MP N Uttam Kumar Reddy took out a candle light rally at Tank Bund demanding the capital punishment to the accused in Hathras gang rape and murder case.

Tension prevailed at Ambedkar Statue near the Tank Bund when the police prevented them from taking out the rally as there was no permission for the rallies and public meetings in the city.

Jostling was taking place between Congress workers and police when the police tried to take them into their custody. Later police arrested Uttam and others and shifted them to Bollarum police station and then released them.

Uttam Kumar Reddy alleged that the Uttar Pradesh Police have crossed all the limits by manhandling and resorting to lathi charge on Rahul Gandhi.

He said “Khabardaar Yogi! You'll have to pay the price for this. People will teach you a strong lesson.” Earlier soon after receiving the news of Uttar Pradesh police detaining Rahul Gandhi and Priyanka Gandhi at Noida when they were on their way to Hathras, the Congress workers along with Revanth Reddy
who were at Indira Bhavan came on roads and tried to barge into the State BJP Office which is situated in front of Indira Bhavan.

When police prevented Revanth Reddy and the Congress workers from proceeding towards the BJP office, he squatted on the road along with
Congress workers and picked up an argument with the police.

Meantime some Telangana youth Congress workers led by their president Anil Kumar Yadav tried to barge into the BJP office. The BJP workers prevented him from entering into the premises, which has led to a clash between workers of both parties.

The BJP workers also squatted on the road and started sloganeering against the Congress. The police averted both groups from indulging into a fist fight and took Revanth Reddy and others into custody and shifted them to the police station.

Meanwhile, the Congress workers led by Congress Legislature Party leader Mallu Bhatti Vikramarka took out the candle rally in Khammam city. The CLP leader demanded that the accused in the rape case to be hanged.  He strongly condemned the police high handed behaviour at Rahul Gandhi.

I am ready to fight with God for water: KCR

Trump rounded the corner and landed in the epicenter of the pandemic: Analysis