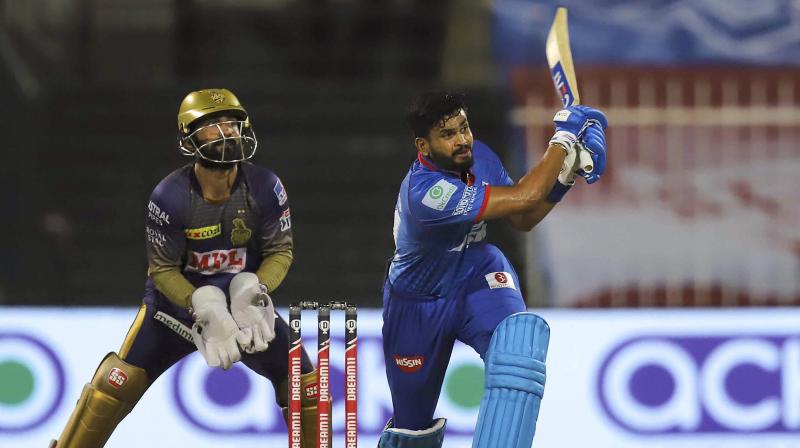 Sharjah: Shreyas Iyer showed his class with a captain’s knock of 88 not out off 38 balls after Prithvi Shaw’s opening act that propelled Delhi Capitals to a commendable 228 for four against Kolkata Knight Riders in an IPL game held on a batting paradise here on Saturday evening.

If that was not enough, Rishabh Pant (38 off 17 balls) dusted off his rustiness with a quickfire knock.

If the Powerplay belonged to Shaw, who blazed his way to 66 off 41 balls with four boundaries and as many sixes, Iyer dominated the remaining part of the innings with his silken smooth batting as he scythed the opposition attack with seven fours and half a dozen sixes.

A few of Iyer’s sixes landed either in the top tier or got lost in the car park adjoining the stadium, such was the timing rather than brute force that the DC skipper used.

Containment was never possible on such a track with Capitals batsmen hitting as many as 14 sixes and 18 boundaries in the entire innings.

Patrick Cummins (0/49 in 4 overs) was taken to task by Shaw in the Powerplay as he repeatedly cleared the in-field. Mavi opening the bowling also got the hammering as he lost his length early on, bowling either too full or too short to the DC openers.

Such was Shaw’s form that even Shikhar Dhawan (26 off 16 balls) was overshadowed despite some decent hits in a 56-run opening stand.

However, the man who entralled one and all was Iyer with some monstrous hits.

The two spinners Varun Chakravarthy (1/49 in 4 overs) and Sunil Narine (0/26 in 2 overs) were simply sent into orbit.