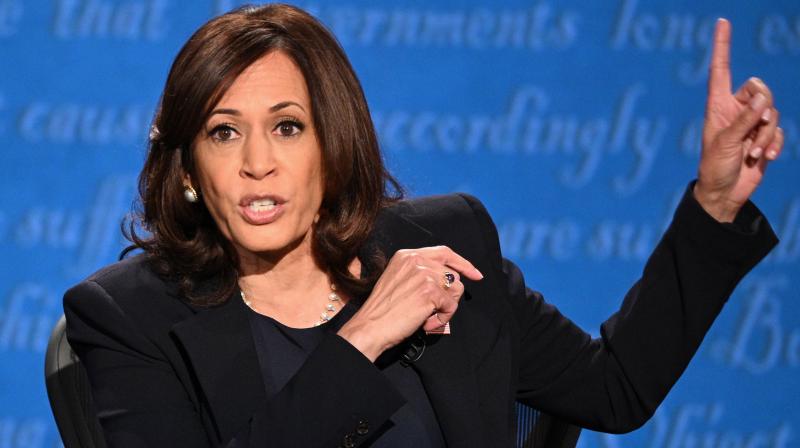 Washington: Democratic vice president nominee Kamala Harris described the Trump administration's handling of the COVID-19 pandemic as the "greatest failure of any presidential administration in the history" of the US as she opened the only vice presidential debate with a sharp attack on Vice President Mike Pence, who leads the president's coronavirus task force.

The 55-year-old California Senator said Americans have sacrificed too much due to the "incompetence of this administration", referring to the COVID-19 pandemic that has claimed over 200,000 American lives and battered the country's economy.

"The American people have witnessed what is the greatest failure of any presidential administration in the history of our country," Harris said at the beginning of the debate in Salt Lake City, Utah on Wednesday night.

President Donald Trump, who tested positive for COVID-19, is facing criticism over his handling of the health crisis and downplaying the threat from the deadly virus. Democratic Presidential candidate Joe Biden has accused Trump of hiding the facts from the American people.

Harris said people needed information they may "not want people to hear, but they need to hear so they can protect themselves."

"They've had to sacrifice far too much because of the incompetence of this administration," she said.

On his part, Pence, 61, said that steps taken by President Trump have saved hundreds and thousands of American lives.

"Our nation's gone through a very challenging time this year, he said. I want the American people to know, from the very first day, President Trump has put the health of America first," the Republican vice presidential candidate, said.

On her plan to handle the crisis, Harris said that the Biden administration would focus on "contact tracing, testing, administration of the vaccine, and making sure that it will be free for all."

"That is the plan that Joe Biden has and that I have, knowing that we have to get a hold of what has been going on," she said.

Harris also said that if there is a coronavirus vaccine available during Trump's administration that is not embraced by scientific advisers, she will not take it.

But if the country's top scientific advisers like Dr. Anthony Fauci back the vaccine, she would.

Harris, who aspires to be the first woman vice-president in history, and Pence are separated by plexiglass barriers. They sat 12.25 feet apart on the debate stage.

It is for the first time in the American history that an Indian-origin person has taken up the podium for a vice presidential debate.

The debate, moderated by journalist Susan Page, is divided into nine segments of approximately 10 minutes each.

Political analysts believe that an aggressive Harris will easily prevail over Pence during the only vice-presidential debate and help Biden, 77, to widen his lead over Trump, 74.

Biden, in the last few days, has widened his lead over Trump by double digit. The debate comes nearly a week after the first of the three presidential debates in Cleveland on September 29 which was marked by angry interruptions and bitter accusations.

Why both parties are courting Wisconsin’s Hispanic voters