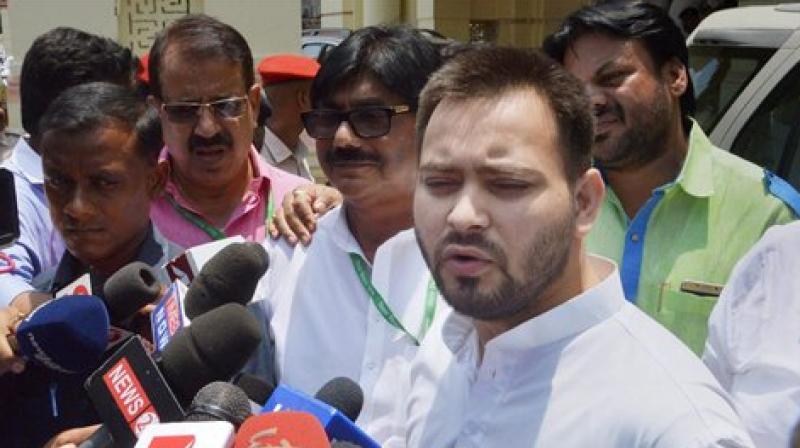 Patna: RJD's Tejashwi Yadav will be the chief ministerial candidate of the oOpposition Grand Alliance in Bihar as it announced a seat-sharing formula on Saturday for the upcoming Assembly polls under which his party will contest 144 of a total 243 seats.

At a press conference here, 30-year-old Yadav, son of Rashtriya Janata Dal(RJD) supremo Lalu Prasad Yadav, announced the number of seats allocated to the Congress, the CPI(ML), the CPI(M) and the CPI, and said his party will contest from 144 assembly constituencies.

Congress was given 70 seats, far more than it had contested in the 2015 assembly polls in alliance with the RJD and Chief Minister Nitish Kumar’s JD(U).

The Congress will also be fielding its candidate in Valmiki Nagar Lok Sabha seat where by-poll will be held on November 7.

Among the Left parties, the CPI(ML) was given 19 seats, followed by CPI (six) and four seats to CPI(M).

The RJD agreed to accommodate VIP, its alliance partner since the Lok Sabha polls last year, and JMM, its ally in adjoining Jharkhand, from its own quota of seats. Yadav said the RJD will declare in another two to three days the seats it will be giving to the two parties from its quota.

Mukesh, who considers himself as ‘Son of Mallah’, fumed at the seat sharing formula after other alliance leaders had left the news conference venue. Earlier, there was speculation that VIP party, which claims support among the fishermen community, will be getting around half-a-dozen seats.

"We have been stabbed in the back," he said.

"It is hereby announced that my Vikassheel Insaan Party(VIP) will not be a part of an alliance wherein the trust reposed by us has been betrayed and we have not been accorded due respect".

VIP supporters gave vent to their ire by vandalising flower vases and raising slogans against the RJD as other leaders of the Grand Alliance sought to present a picture of unity.

The Bihar assembly elections would be held in three phases on October 28, November 3 and November 7. Counting of votes will be taken up on November 10.

It is also speculated that RLSP chief Upendra Kushwaha, who recently quit the Grand Alliance and joined hands with the BSP, may arrive at an understanding with Pappu Yadav’s front to queer the pitch for the main players at the hustings.

Congress leader Avinash Pandey, while backing Tejashwi Yadav as the chief ministerial candidate, showered praise on the former deputy chief minister for having taken on the BJP at a tender age in the assembly polls held five years ago.

Amid bitter fight for seats, the Congress has been assuaged with an offer of 70 seats, many more than 41 it was allotted five years ago.

"Our respectable Chief Minister Nitish Kumar too was with us. But then the ''apharan'' (hijacking) of popular mandate took place and he ended up siding with those whom he had fought against in the polls," Pandey said.

The JD(U) chief had made an abrupt exit from the Grand Alliance in 2017 after Lalu Prasad Yadav’s name cropped up in a money laundering case.

Kumar is seeking a fourth consecutive term having been backed by the BJP''s top brass to lead the NDA in the key eastern state.

Facing rebellion from Ram Vilas Paswan''s LJP, the NDA is yet to come out with its own seat-sharing formula, though less than a week is left before filing of nominations for the first of the three-phase elections comes to a close.

Tejashwi Yadav also took potshots at Kumar, saying "I am a "theth" (pure) Bihari, who knows how to keep his promises. And my DNA too is pure".

The "DNA" remark was an oblique reference to an infamous jibe at Kumar by Prime Minister Narendra Modi during 2015 Bihar polls while the two were locked in a bitter political rivalry.

Kumar had taken affront to the remark, taking it as an insult to all people from Bihar, and rallied the RJD and Congress along in launching a counter-offensive.

Yadav also repeated his promise of providing 10 lakh government jobs to youths if the Grand Alliance was voted to power.

"I repeat, sanction for starting the process will be given at the first cabinet meeting", he said.

The Republican Party thinks only weaklings die of COVID-19