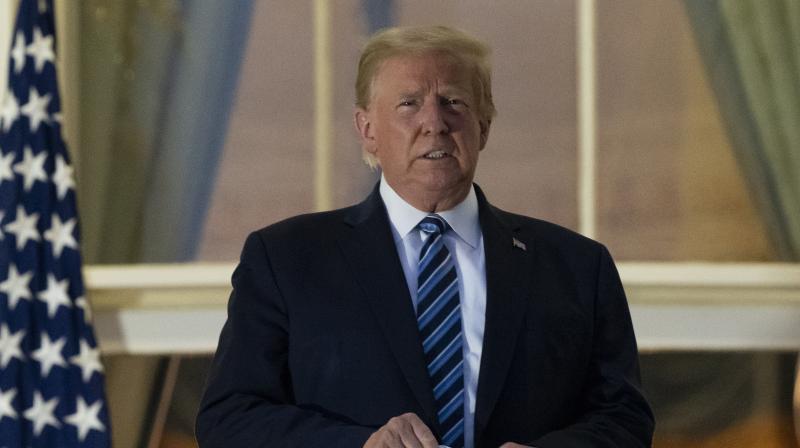 Washington: Describing getting coronavirus that took him to a military hospital for treatment "a blessing in disguise", US President Donald Trump on Wednesday told the countrymen that he will get them same medicine that cured him for free.

"I want everybody to be given the same treatment as your president because I feel great. I feel like perfect. So, I think this was a blessing from God that I caught it. This was a blessing in disguise," Trump said in a video message.

Standing at the Rose Garden outside the Oval office, Trump attributed his fast cure to Regeneron drug along with others.

He was discharged from the hospital Monday.

On Wednesday Trump went to the Oval office to have a briefing on Hurricane Delta and on coronavirus stimulus.

Less than four weeks before the crucial presidential elections, Trump said he wants Americans to get the same treatment that he received.

"I want to get you what I got, and I'm going to make it free. We're going to get it in to the hospital as soon as you can as soon as we can with military handling the distribution," Trump said, adding that they have "hundreds of thousands of doses that are just about ready".

According to Trump, in addition to Regeneron, there is a very similar drug from Eli Lilly, a pharmaceutical company.

"They are coming out. And we're trying to get them emergency basis. I've authorised it," he said.

"I walked in (the hospital). I didn't feel good. A short 24 hours later, I was feeling great. I wanted to get out of the hospital and that's what I want for everybody," he said.

Earlier in the day, his physician said Trump has been fever-free for more than four days now and that physical exam and vital signs remain stable and in normal range.

"The President this morning says 'I feel great!' His physical exam and vital signs, including oxygen saturation and respiratory rate, all remain stable and in normal range," White House Physician Dr Sean Conley said in a memorandum released Wednesday afternoon.

"He's now been fever-free for more than four days, symptom-free for over 24 hours and has not needed nor received any supplemental oxygen since initial hospitalization," he wrote.