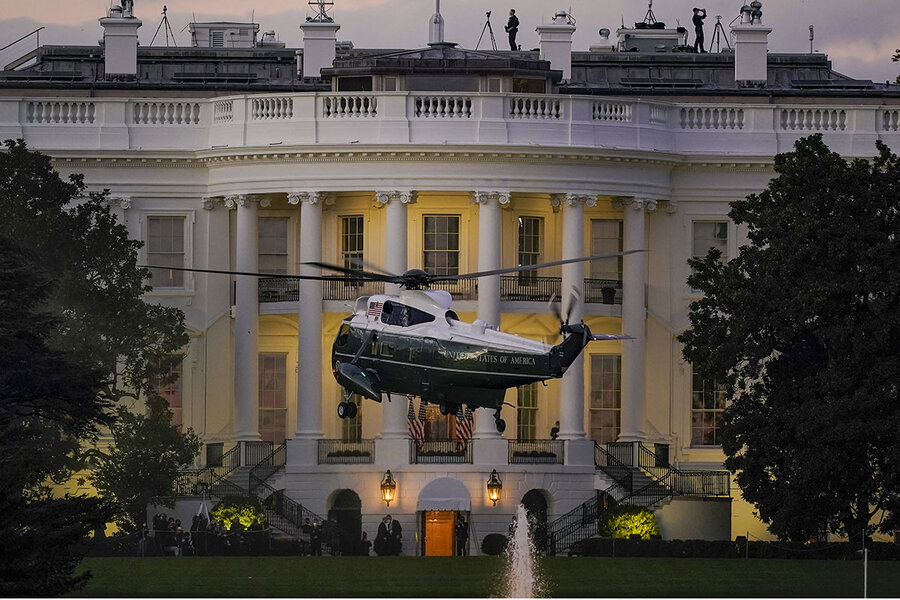 On Tuesday, Mr. Trump tweeted that he was “looking forward” to debating Democratic nominee Joe Biden in Miami on Oct. 15, the latest sign of a president projecting good health, and that he’s eager to return to the campaign trail.

Nearly four years into the Trump presidency, chronic credibility challenges have made the president’s health situation – and larger public messaging around the pandemic – all the more potentially destabilizing. From misstating the crowd size on Inauguration Day to claims that Mexico will pay for the wall on the U.S. southern border, Mr. Trump has racked up thousands of false statements, some merely comical or obvious exaggeration, others more consequential.

As a showman and salesman, Mr. Trump can be excused some hyperbole and imprecision, his defenders say. But there can be larger consequences to feeding the American people a steady diet of false or misleading claims, intentionally or not – including potentially leading the public not to believe the president during an emergency such as a 9/11-style attack, communications experts say.

“In past presidencies, there was a presumption that what you were being told was at least accurate, even if incomplete,” says Kathleen Hall Jamieson, director of the Annenberg Public Policy Center at the University of Pennsylvania. “The presumption has now shifted to doubting everything that one is told.”

An atomized media environment already marked by political polarization, disinformation, and freewheeling social media has made efforts to keep the public accurately informed all the more difficult.

A mutual distrust between the White House and its press corps can also lead to misfires.

“The messaging around Trump’s health wasn’t as crisp as it could have been because [officials] didn’t know who they could trust,” says a GOP strategist regularly briefed on White House and campaign strategy. “They felt it would be irresponsible to give out too much information, because it could be misinterpreted.”

Still, in the presidency – the American institution with the biggest megaphone on the planet – perhaps the most precious commodity of all is credibility.

Anyone who violates one of those guidelines, much less two or three, will destroy their credibility, Mr. Ayres says. He points to Dr. Anthony Fauci, the nation’s top epidemiologist, and Republican Gov. Mike DeWine of Ohio as public figures with “enormous credibility and resulting popularity” – both examples of how it’s possible to maintain credibility during a pandemic.

It’s also essential, Mr. Ayres says, to remain fact-based when making highly consequential decisions, such as whether or how to reopen the economy and schools before a vaccine becomes widely available.

The vaccine question itself has become politicized as Mr. Trump urges government approval of a vaccine by Election Day. On Tuesday, the Food and Drug Administration released tough new guidelines for the emergency release of a coronavirus vaccine, which are designed to boost public confidence in the vaccine – but will make it unlikely that a vaccine is released before Election Day. The White House had reportedly blocked the new guidelines for two weeks.

Mr. Trump’s push for a vaccine, under Operation Warp Speed, has met with growing skepticism by the American public. An NBC News/Survey Monkey poll released in mid-September showed only 39% of Americans said they would be willing to get the vaccine, down from 44% the month before.

“This White House has been challenged from the beginning on its credibility,” says Martha Joynt Kumar, a political scientist who has observed White House operations from inside the building’s press quarters for decades. “It’s a sad situation that people believe they can’t believe a president.”

Mr. Trump’s decades running privately held businesses that don’t answer to shareholders have likely fed his impulse as president to treat White House staff the same way – as employees loyal only to him and not as public servants, she suggests.

That said, among White House staff there’s frustration that some information about infections within the building was not reported in a timely manner. Some staff have become infected themselves, as have some members of the press corps. Mask-wearing is now more common within the White House, but still not universal, staff say.

Mr. Trump himself still sets the tone on the mask question. Upon his return to the White House on Monday, he pulled his mask away from his face and entered the building, maskless, with staff standing nearby.

Getting coronavirus a blessing in disguise: Trump

President Trump can learn a lot from Mike Pence