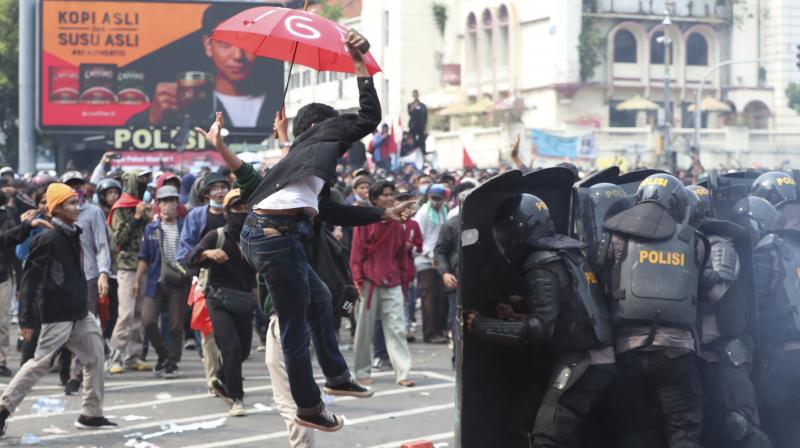 Jakarta: Nationwide protests and labour strikes against a polarising new jobs law in Indonesia continued across the country for a third straight day on Thursday.

The “omnibus” jobs creation bill, passed into law on Monday, has seen thousands of people in Southeast Asia’s largest economy take to the streets in protest against legislation they say undermines labour rights and weakens environmental protections.

In the past two days, almost 600 people have been detained, and two students seriously injured, while police have used tear gas and water cannons to disperse demonstrators.

On Thursday morning, crowds gathered across major cities on the most populous Java island, including Jakarta and Bandung, according to local media and video footage shared by Kahar S. Cahyono, a spokesman from the Confederation of Indonesian Workers’ Union (KSPI).

Maulana Syarif, 45, who has worked at Astra Honda motors for 25 years, told Reuters he joined the protests in Jakarta to fight for the rights of future generations.

“We ask that the law be repealed immediately,” he told Reuters. “This is our struggle for our children and grandchildren, and our future generations…If it’s like this (with the new law) our well-being will decrease, and we will lack certainty in jobs.”

In conjunction with 32 other trade unions, Said Iqbal, KSPI president, said its strike would continue for a third and final day on Thursday.

Met with cautious optimism by some financial analysts, the bill has sparked a significant outcry, with labour unions, students and academics criticising it for a perceived lack of consultation, expedited passage, and problematic clauses they say will harm workers and the environment.