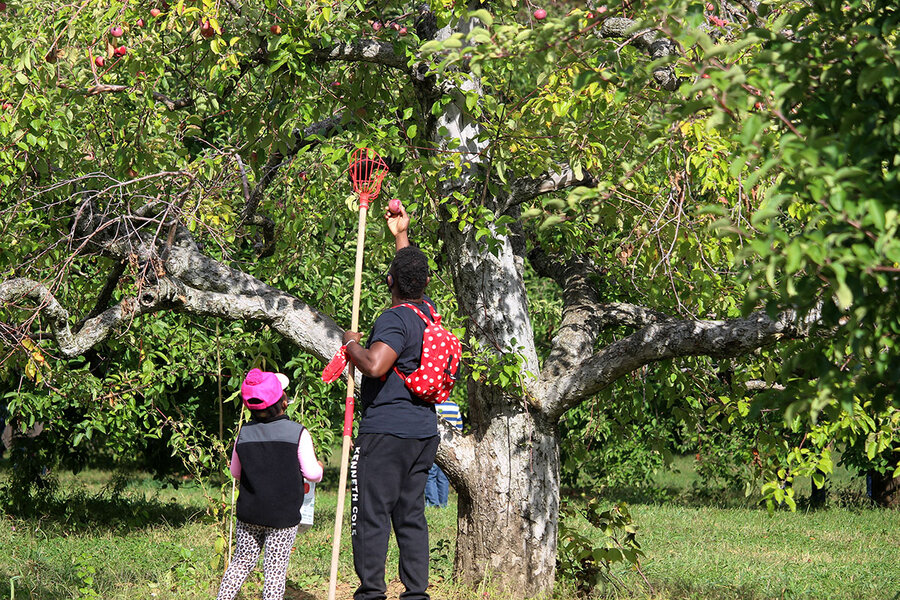 Michelle Melanson only has a minute to talk. It’s Saturday, the sun is warm, and the leaves are just showing their fall colors – a recipe for a packed day at Brooksby Farm in Peabody.

“It has been an extremely busy season,” says Ms. Melanson, the farm’s store manager, her voice rising on the phone over the din of customers. Today, the lines for pick-your-own apples and pumpkins are particularly long.

And particularly clean. Everyone gets a squirt of hand sanitizer or uses the makeshift hand-washing station. Masks stay on inside and in line, though some visitors pull them off in the orchard, despite “masks are required” signs. It’s autumn in the heart of New England – and the time of the coronavirus – and business is booming.

With Halloween around the corner and other businesses struggling through an economic downturn, orchards are hustling through peak season. Pick-your-own apples and pumpkins, with all the trimmings – cider donuts, hayrides, and corn mazes – are a draw for cooped-up families looking for safe outdoor activities. And farmers, resilient to seasonal shifts, are well-equipped to handle crowds of eager visitors.

“It’s been a fabulous year in terms of turnout,” says Ben Clark, owner of Clarkdale Fruit Farms in Deerfield. “People really want to be outside doing something with the family that’s safe and socially distanced. … People are really looking for some normalcy.”

Mr. Clark is also president of the Massachusetts Fruit Growers Association. As farmers, “we were prepared just like we’d be prepared for a storm,” he says.

New England is fertile ground for smaller orchards that offer agritourism activities, a different breed from the huge commercial fruit operations mostly found in Washington state. But even outside New England, small orchards are seeing an uptick in business. “We’re absolutely hearing that from around the country,” says Jim Bair, president of USApple, an industry organization.

“Even in a normal year, family outings to pick apples is a time-honored tradition. And this year, I think people are tired of looking at the same four walls,” he says.

At Brooksby Farm, Elizabeth Kotoulis and Rachel Smith wander among the apple trees, enjoying a reprieve from Boston, where they both live.

“I think it’s such a strange time, that I still feel guilty doing these kinds of things,” says Ms. Smith. “But you also kind of have to, for your mental health.”

“This is like the least bad thing you could do right now,” Ms. Kotoulis says. The nearest group of visitors inspects a tree several yards away.

“It’s nice to hear other people talking and having that conversation that a lot of people were lacking in the first three months [of the pandemic],” Ms. Smith agrees. “I’m just going to enjoy the day, make some caramel apples.”

The pair’s stroll was well-orchestrated by the farm, with all the usual sanitization protocols and only a certain number of people allowed in the orchard at one time.

Some farms, like Tangerini’s Spring Street Farm in Millis, Massachusetts, are asking visitors to reserve a day and time for hay-bale rides or apple picking to control crowds. They’ve also made their produce available for curbside pickup and home delivery.

“Thank goodness for our laminator,” says Linda Chiarizio, who owns Tangerini’s with her husband, Steve, and has put up a lot of signs in the last few months instructing visitors how to safely move around her farm. Near The Farmer’s Porch, their restaurant, where people dine in the open air, the Chiarizios have parked an old flatbed army truck – a makeshift stage for live music at a distance.

Some Halloween festivals are nixed, however. Connors Farm in Danvers, Massachusetts, is skipping Hysteria, its haunted farm and flashlight maze event. And large events in general, like weddings and birthday parties, are off the table.

But farmers have made the best of a tricky season. That’s business as usual, says Mr. Clark. “Farmers by nature are resilient because we have to be,” he says. “Many farms … have survived for generations because they’ve adapted to change and diversified their operations.”

After staying on top of coronavirus regulations, and weeks of pleasant weather, Tangerini’s Farm is moving on to pumpkins and hayrides after its apple orchard was “PICKED OVER!” as its website declares, in red.

“Usually by the first weekend in October or at least Columbus Day weekend, we usually don’t have any more apples left,” says Ms. Chiarizio. “But we got picked over in the middle of September, which was wild.”

A jungle has developed in my digital library