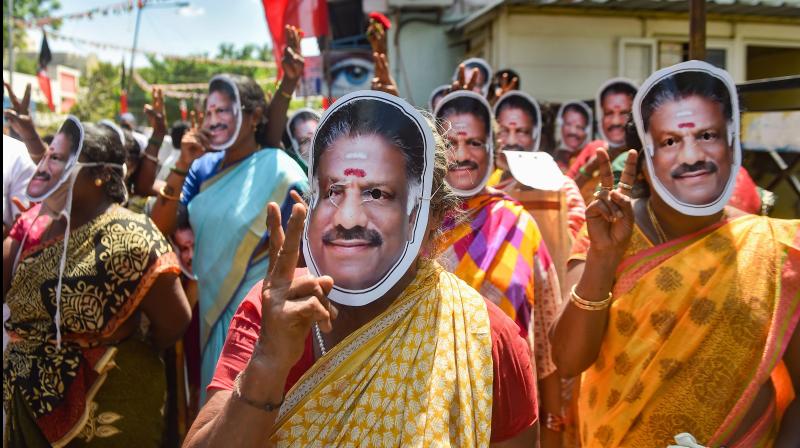 An eerie calm prevailed at the AIADMK camp after it was rocked continuously for a few days by the turbulence caused by the infighting over the question of the next Chief Ministerial candidate as Deputy Chief Minister O Panneerselvam left Chennai, driving off to his home town Theni on Saturday.

Panneerselvam is expected to hold discussions with his supporters at the sprawling farmhouse in which he was staying. Hearing about his arrival at the farmhouse, his supporters started gathering outside, purportedly to egg him on to continue with the fight.

Meanwhile, Chief Minister Edappadi K Palaniswami had asked his ministerial colleagues to be present in Chennai for three days from Monday. When asked about it, Tourism Minister Vellamandi N Natarajan told the media that it was purely for official purposes.

Other Ministers, too, sought to play down the raging dispute, saying that an amicable decision would be taken before October 7. Revenue Minister R B Udhayakumar said Palaniswami and Pannerselvam were like Ram and Laskshman.

Speaking to the media at Madurai, Udhayakumar said the two would think alike and take the same decision and that it would be known on October 7.

Dairy Development Minister K T Rajenthra Bhalaji said that tranquility prevailed inside the AIADMK and what one may perceive from outside was not the true picture of the situation.

The buzz is that an agreement had been reached between the two groups and that Panneerselvam would hold the reins of the party and Palaniswami would run the government. Also the steering committee would be formed to oversee the functioning of the party as demanded by Panneerselvam.

Besides, most of the MLAs of AIADMK have seemingly gravitated towards the Palaniswami camp as their priority was to complete the term. They were not in favour of the rebellious Pannerselvam pulling down the government at his point of time with his adamant attitude and firm demand to be announced as the next Chief Ministerial candidate.

Apart from a few senior functionaries holding no prominent positions in the party or government, most of Pannerselvam’s supporters are from the grassroots level, predominantly from his locality. Even if they had aspirations of seeing him as the next Chief Minister, Panneerselvam would have to abide by the decision taken by the other MLAs and leaders.

So, his stay in the farm house would be spent explaining to the supporters that the party was more important and without winning the elections as a united party, they could achieve nothing.

The day that changed politics, 4 years ago today