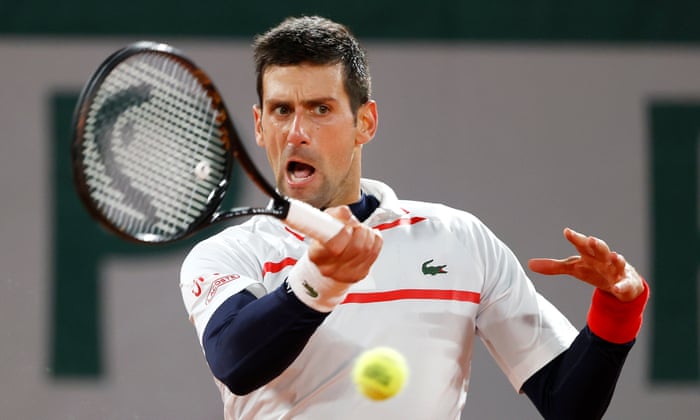 Novak Djokovic is still in the French Open – but only after a drawn-out struggle in four sets on Wednesday night against Pablo Carreño Busta, the Spaniard who cashed in at the US Open when the world No 1 was disqualified for striking a line official with a spare ball. It was not a joyous reunion.

A month after their shared New York drama, Carreño Busta had notions of winning on his own merits after taking the first set of the second quarter-final on day 11, but Djokovic ignored nagging pain in his upper left arm and his neck as he cobbled together a 4-6, 6-2, 6-3, 6-4 win in 3hr 10min under the lights on Court Philippe Chatrier. He has two days to recover before playing Stefanos Tsitsipas on Friday, and he will need every waking hour of them.

Djokovic was coy about his injuries later and would only say: “I had some neck and shoulder issues. I’m still in the tournament, so I don’t want to reveal too much. I’m feeling OK. As the match progressed, I warmed up and the pain faded away. It allowed me to play better and feel better.”

Carreño Busta cast doubt on the seriousness of Djokovic’s injuries. “That’s normal, no? He makes always [such gestures],” he said. “The last years he’s always doing this when he has problems on court. I don’t know, maybe it’s the pressure or something that he needs to do it. But he continues playing normal, no? I don’t know if he’s in pain really, or he has mental [issues].”

If the 2016 champion is to win the title again he has to beat injury, an in-form Tsitsipas and, probably, the 12-times champion, Rafael Nadal, who plays Diego Schwartzman in the other semi-final. It is the sort of mountain Djokovic loves climbing, but the question remains: is he fit and strong enough to reach the summit? 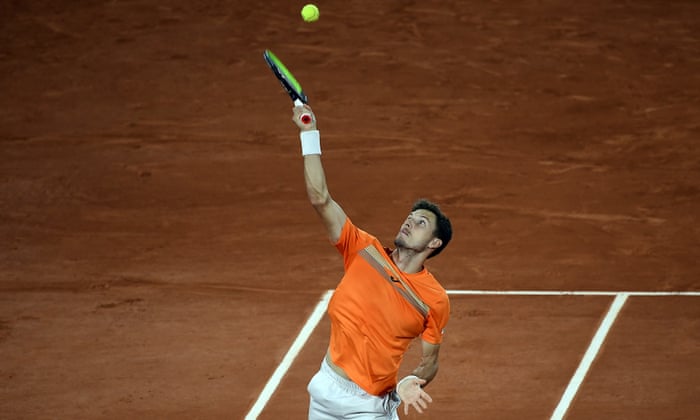 Djokovic was cleared to play in Rome, where he beat Schwartzman in the final, and in Paris after testing positive for coronavirus on his Balkans exhibition tour earlier in the summer – but he looked a physical mess in the first set. Sweating and anxious, he grimaced, tugged at his arm and bandaged neck and tried to bang life into his upper legs with his racket as his opponent waited for his chances.

The tournament physio massaged Djokovic’s arm during the break at the end of the set and the player told him: “It feels better now.” Yet he did not look remotely comfortable, even when he got his serve working. The trainer returned between the third and fourth games, and it seemed to lift Djokovic’s spirits. Just when he looked as if he was slipping into a confused state again, he bounced back to level at a set apiece.

He broke early in the third, overcame a blip when Carreño Busta broke back for 2-3, then hit hard again to go a set up. But he looked far from commanding. Carreño Busta dug his heels into the Roland Garros clay in the fourth and Djokovic had to fight for every point. Carreño Busta chose a woeful option to hand him the break for 3-4, Djokovic saved break point to hold through deuce for 5-3 and served out to survive, his final shot a wicked crosscourt forehand.

While Djokovic remains unbeaten in 36 completed matches this year, he is not as content now as he was when carving through the first four matches of the tournament for the loss of only 25 games. This was a patchy, nervous performance, saved by the grit and class of a player many observers regarded as a slight pre-tournament favourite. On the eve of the semi‑finals, this is anyone’s French Open.

Rent levels at lowest rate of growth since 2012