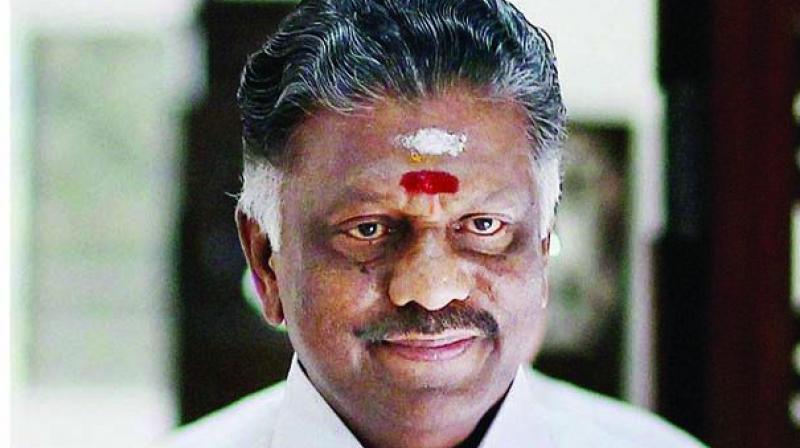 Chennai: Two days ahead of an announcement on the party's Chief Ministerial candidate, AIADMK coordinator and Deputy Chief Minister O Panneerselvam on Monday hinted at the probability of a "decision" considering the welfare of the people and cadres.

Amid a standoff with party co-coordinator and Chief Minister K Palaniswami over constituting a 11-member steering committee and on who should be the Chief Minister candidate of the party for the 2021 Assembly elections in Tamil Nadu, Panneerselvam, on his twitter handle gave a cryptic message.

The Deputy Chief Minister said he had so far taken "decisions" only considering the welfare of the Tamil Nadu people and AIADMK cadres.

In future too, he would continue to take "decisions" taking into account the interests of the people and party workers, he said.

The popular verses are from the Bhagavad Gita.

Panneerselvam's remarks, seen against the backdrop of AIADMK's statement days ago that it would announce the Chief Ministerial nominee on October 7 assumes significance.

Asked about the tweet, political analyst Sumanth Raman said there could be two interpretations to Panneerselvam's cryptic message.

"One is that he was going to take a big decision. Another is that there may not be a drastic move considering factors like strengthening the party and fulfilling the wishes of the cadres," he told P T I.

The message has been worded in a cryptic fashion deliberately to create a sense of expectation from him and to turn the focus on him, Raman said.

The Deputy Chief Minister may also expect a face-saver kind of an arrangement from Palaniswami, he said.

At the September 28 AIADMK Executive Committee meeting, Palaniswami and Panneerselvam had a verbal duel over who should be the Chief Ministerial candidate of the party for the next year's assembly election and on setting up a panel.

Following AIADMK supremo J Jayalalithaa's death in 2016,Panneerselvam and Palaniswami led separate factions and they came together in 2017 August easing out V K Sasikala (Jayalalithaa's aide) and her relatives from the party.