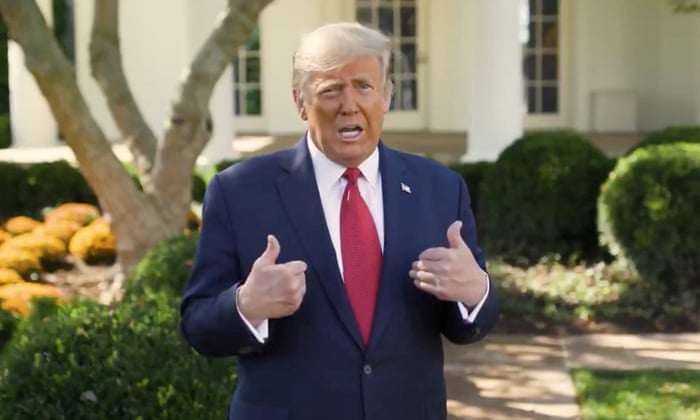 New questions have emerged over the circumstances in which Donald Trump was given an experimental antibody drug cocktail produced by a golfing acquaintance to treat his coronavirus infection.

As Trump wrongly hailed his treatment – which included a drug called REGN-COV2 produced by Regeneron – as a “cure”, it emerged that the company’s chief executive, Leonard Schleifer, is a member of the Trump National golf club in Briarcliff Manor, New York, and had met the president in May to talk about drugs his company was developing.

While some ethicists have defended Trump’s privileged access as president to experimental treatments, others have suggested it raises questions of fairness among other concerns, including his history of touting unproven treatments.

Trump’s relationship with Schleifer, whom he reportedly calls “Lenny”, adds to growing questions over the president’s almost exclusive access to experimental treatments unavailable to most other Americans, even as he has continued to downplay the threat of coronavirus based on his own experience.

The price of Regeneron stocks – which Trump has owned in the past – soared after it was revealed the drug had been made available for his treatment and Trump stated it would be made freely available for all, although he didn’t explain how.

“I call that a cure,” Trump said in a video, adding that everyone should have access to the not-yet-approved drug and that he would make sure it was in every hospital as soon as possible.

Trump’s comments were quickly criticized by doctors treating patients on the frontline of the Covid-19 pandemic in the US.

He concluded: “Do everything the opposite of what this administration is telling you.”

After the president’s comments, Regeneron announced it had applied to the Food and Drug Administration (FDA) for an emergency use authorisation.

Regeneron’s therapy has only been tested in 275 people, in a promising study that some scientists nevertheless said, “doesn’t cut it” for emergency use authorization.

The drug has also stirred debate because of how it was developed – using an “immortalized” cell line originally derived from an elective abortion in the Netherlands in the 1970s, a common process that the Trump administration opposes.

The White House doctor, Sean Conley, said Trump had been given a single 8g dose that was made available under a compassionate use clause. Compassionate use requests are decided on a case-by-case basis, and both the drug company and the FDA must agree.

The Regeneron spokeswoman Alexandra Bowie said fewer than 10 of these requests had been granted, and with the drug in limited supply the priority was to use it in ongoing studies. Emergency access was granted “only in rare and exceptional circumstances”, she said.

Regeneron also contacted the Democratic presidential candidate, Joe Biden, to alert him to the availability of the drug under the compassionate use rule.

“That crosses lines of appearing to promote a potentially unapproved product,” she told Associated Press, which would violate FDA rules. Rather than directing people to enrol in studies, she said it suggested that “we’ll cut the line for you”.

The relationship between Trump, senior US government officials and Regeneron overlaps at multiple points. In March, Schleifer and and Daniel O’Day, the chief executive of Gilead, which produces Remdesivir, were among biopharma executives who met at the White House to discuss their efforts to develop drugs and vaccines.

A month later, O’Day and Schleifer were among 200 leaders in 13 specific industries appointed to the Great American Economic Revival Industry Groups, set up to “work together with the White House to chart the path forward toward a future of unparalleled American prosperity”.

Regeneron received $450m in government funding in July as part of the president’s Operation Warp Speed plan to quickly develop a vaccine and other treatments for Covid-19.

Trump’s depiction of the Regeneron cocktail as a “cure” has drawn heavy criticism from medical experts, with some saying there was no chance it could have cured him in 24 hours.

Professor Martin Landray at Oxford University, one of the leaders of the Recovery trial, said it was impossible to draw any conclusions from one person’s experience. “However, one man fares, one can’t say whether he did well, or badly, because of the drug, in spite of the drug – or just that the drug had no effect,” he said.

Landray thinks the drug has real possibilities. “In the few hundred patients that they studied so far, it does reduce the viral load – the amount of virus in the patient,” he said. Likewise in the laboratory, it binds to the virus and stops it getting into cells and causing damage.

“So it’s a drug that’s clearly bad for the virus. The question is, is it good for the patient and which patients and how good?”