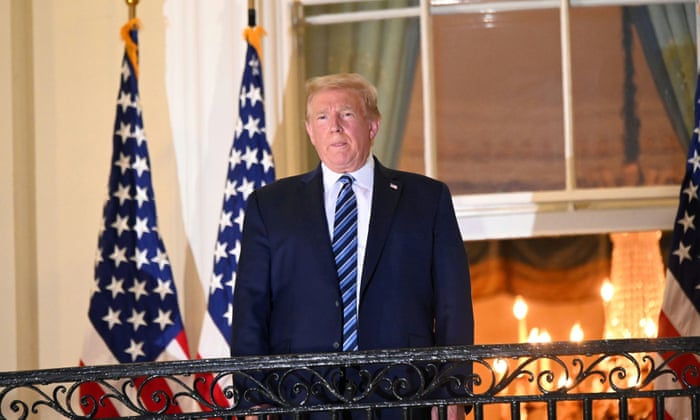 One of the drugs taken by Donald Trump that he has touted as a potential “cure” for coronavirus was developed using human cells originally obtained from an elective abortion, a practice repeatedly denounced by the president and many of his supporters.

The drug is a monoclonal antibody cocktail developed by Regeneron. The president received an 8-gram infusion under a “compassionate use” exemption when he was hospitalized over the weekend after testing positive for Covid-19. There is no cure for Covid-19, and the drug is not approved.

The cells used to develop the drug are known as HEK-293T cells, a line of cells used in laboratories. The cells were originally derived from an embryonic kidney after an elective abortion performed in the Netherlands in the 1970s. HEK-293 cells are one of the most commonly used cell lines in laboratories across a wide array of research.

Trump has consistently sought to restrict abortion access, including most recently, when he nominated the conservative Catholic Judge Amy Coney Barrett to the supreme court last month. The anti-abortion movement is one of Trump’s most enthusiastic bases of support.

“We stopped the federal funding of fetal tissue research, which everybody felt was so important …” the president told supporters in January 2020. “We’re standing up to the pro-abortion lobby like never before.”

The HEK-293T line of cells has been “immortalized”, meaning they divide freely in the lab. Regeneron said the company does not consider the cells “tissue”.

“It’s how you want to parse it,” a Regeneron spokeswoman, Alexandra Bowie, told the MIT Technology Review. “But the 293T cell lines available today are not considered fetal tissue, and we did not otherwise use fetal tissue.”

Development of the Regeneron antibody cocktail is supported by a $450m grant from the Biomedical Advanced Research and Development Authority (Barda).

The Susan B Anthony List, a leading US anti-abortion group, did not immediately respond to a request for comment. However, the anti-abortion movement has weighed in on other Covid-19 drugs in development. At least five Covid-19 vaccine candidates used either HEK-293T cells or a proprietary line of cells developed by Janssen from a 1985 elective abortion.

In April, the influential US Conference of Catholic Bishops wrote to the US government to ask that it “incentivize” vaccine candidates developed without use of such cells.

“It is critically important that Americans have access to a vaccine that is produced ethically: no American should be forced to choose between being vaccinated against this potentially deadly virus and violating his or her conscience,” the letter said, as reported by Science Magazine.

Regeneron has worked with the US government to develop monoclonal antibody therapies for years. In 2018, researchers from Regeneron and the US government used the same line of cells in development of a therapy for the Ebola virus, according to a study published in the Journal of Infectious Diseases.

“Research using such stem cells allows Regeneron to model complex diseases, test new drug candidates and can help unlock new scientific insights that ultimately could lead to the discovery of new treatments for people with serious diseases,” Regeneron said in an April 2020 statement about stem cells in general.

Regeneron’s drug is not available to the public and has been tested on only 275 people to date. Therapies in the same class as Regeneron’s antibody cocktail cost on average more than $96,000 a course.

The Trump administration has worked systematically to limit abortion access in the United States and abroad. Vice-President Mike Pence has said: “I long for the day Roe v Wade is sent to the ash heap of history,” referring to the US supreme court decision which has allowed for women to obtain legal abortions since 1973.

Narrowing your eyes can help build a bond with your cat, study suggests