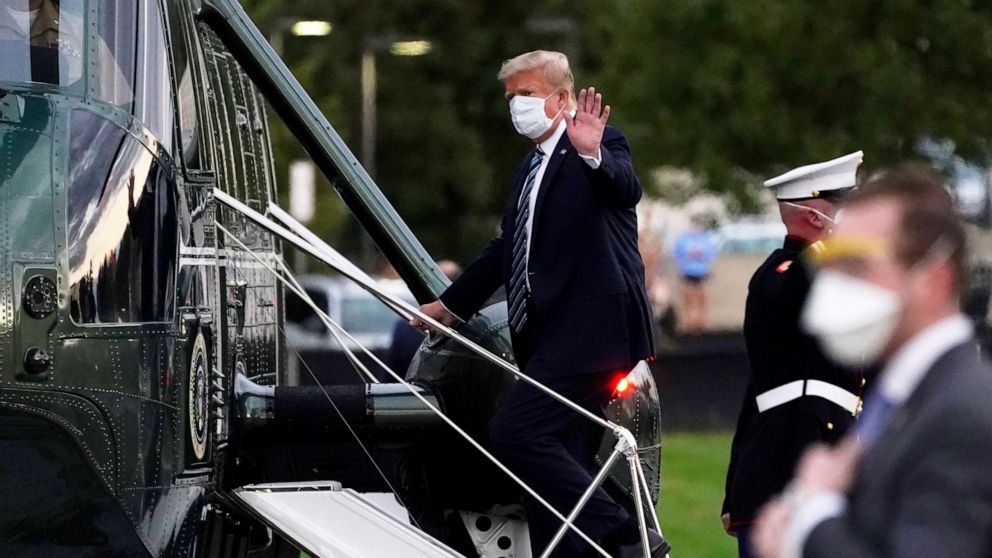 The White House has repeatedly refused to disclose when President Donald Trump last tested negative for COVID-19 before he announced his infection — information that could help determine who he exposed to the virus and the severity of his illness.

The White House has also declined to confirm when and how Trump was tested before last Tuesday’s presidential debate with Joe Biden, even though both campaigns certified to debate organizers that the candidates and everyone who traveled with them to Cleveland tested negative within 72 hours of the debate.

The White House, which has made contradictory statements about when and how often Trump is tested, said the president first tested positive Thursday evening, and first discussed symptoms with his doctor at that time. Studies have shown that coronavirus patients are infectious up to two days before the onset of symptoms.

“People ought to have the right to know whether or not they should be quarantining themselves, if they’re at risk,” Dr. Jeremy Faust, an emergency physician at Brigham and Women’s Hospital and an instructor at Harvard Medical School, told ABC News. “Potentially the president and his team have put others in harm’s way.”

While it’s not clear when Trump was infected with the virus, the White House’s silence raises questions about its compliance with debate rules, the frequency of Trump’s tests, and whether the president or his aides had concerns about him having the virus before he tested positive — as he kept up his busy schedule of campaign events.

It has also added scrutiny to the safety precautions in place for the upcoming matchup with Biden, after Trump’s campaign said he intends to debate Biden in person next week in Florida.

“I think if he still has COVID, we shouldn’t have a debate,” the former vice president told reporters Tuesday.

Debate organizers required the Biden and Trump campaigns’ medical teams to test the candidates and their traveling parties within 72 hours of last Tuesday’s debate, and “certify” to the Cleveland Clinic that each person traveling tested negative within that window.

“Each campaign complied with this requirement,” the clinic, which partnered with the Commission on Presidential Debates to stage the debate, said in a statement.

Specifically, each campaign provided a list of names and the results of their test, clinic spokesperson Angie Kiska told ABC News.

“That’s what was provided to our medical staff, and to the CPD,” she said. “Both parties agreed and signed … that they would adhere to these requirements.”

Kiska said the campaigns only had to use “FDA-authorized” coronavirus tests on the candidates and their traveling parties, and did not specifically require them to take the polymerase chain reaction tests administered to debate attendees in Cleveland, which is considered more accurate than the rapid coronavirus tests favored by the White House.

The clinic on Tuesday referred additional questions about the testing regime to the debate commission.

When asked when and how Trump was tested within the window, Trump campaign spokesperson Ali Pardo said, “This is a question for the White House.”

“I don’t know when he last tested negative,” White House deputy press secretary Brian Morgenstern told reporters Wednesday. “We’re not asking to go back through a bunch of records and look backwards.”

“Vice President Biden received a negative result from a PCR test the Sunday before the debate, well within the 72-hour window set by the Cleveland Clinic,” Biden spokesman Andrew Bates told ABC News. “And his test results were submitted to the Cleveland Clinic on a list of names that included his traveling staff.”

Frank Farenkopf, the chairman of the CPD, told ABC News that going forward he would “ask the Cleveland Clinic to talk to the physicians for both teams to certify that they were tested before they came in.”

Dr. Peter Hotez, the dean of the National School of Tropical Medicine at Baylor College of Medicine, was skeptical of the timeline of Trump’s illness offered by the White House in light of their refusal to disclose the president’s last negative test results.

“The White House and coronavirus task force has not been transparent for the entire year. Why would we expect them to be transparent now?” he said.

Trump kept a full schedule last week before revealing his positive test results early Friday morning, interacting with dozens of people and participating in White House and campaign events with hundreds of attendees.

The previous Saturday, Trump nominated Judge Amy Coney Barrett to the Supreme Court in a Rose Garden ceremony with at least 250 people present, according to ABC News reviews of photographs of the event. At least 11 attendees at the outdoor event — and an indoor reception following the ceremony — have tested positive for coronavirus.

On Sunday, he traveled to his golf course in Sterling, Virginia, and later held a White House event for Gold Star families and a press briefing for journalists.

On Monday, the president held a Rose Garden event on the coronavirus and a debate prep session with close advisers. Six of the nine people in attendance at that session have since tested positive for coronavirus.

In addition to Tuesday’s debate, Trump traveled to Minnesota and New Jersey on Wednesday and Thursday for campaign events, including two indoor fundraisers. The Thursday trip continued even after Hope Hicks, one of Trump’s closest aides, tested positive for coronavirus.

It’s not clear why the Trump campaign carried on with the events after the positive test result from one of the president’s closest aides. While a negative test doesn’t guarantee that an individual isn’t carrying the virus, and one from 72 hours before the debate wouldn’t preclude an infection from a subsequent interaction, the timeline of Trump’s last negative test — as well as the onset of initial symptoms — could help better determine how many people should be in quarantine and concerned about spreading the virus in their own communities.

According to the Centers for Disease Control and Prevention, an individual should quarantine for 14 days if exposed to someone infected with the virus within 6 feet for more than 15 minutes.

“Imagine all the individuals that the president was exposed to in that time period,” Dr. Leana Wen, a George Washington University public health expert and former Baltimore City Health commissioner, told ABC News.

“By now, all those individuals have been exposed to dozens, maybe hundreds of others,” she added. “At this point, we could be looking at third generation spread all across the country.”

The White House has also declined to say when Trump first began experiencing symptoms of the coronavirus, though sources have told ABC News the president began feeling tired on Wednesday.

That information could help the public better understand the course of his own illness.

“His progression of illness would be extraordinary and very concerning, because that means that he didn’t even have sufficient viral load on Wednesday for it to be picked up on a test, but by Thursday, it was so substantial that he had fever,” Wen said.

“On the other hand, if he actually did not have a negative test for days and may even have been symptomatic earlier in the week, then his disease progression makes more sense,” she said.

Conley, Trump’s doctor, repeatedly declined to share some information about Trump’s health — including details of his lung scans — citing the HIPAA privacy law that prevents doctors from releasing information about their patients’ health without consent.

On Wednesday, the White House released a memo from Conley that said Trump’s oxygen and respiratory rate “remain stable and in normal range,” and that Trump has been fever-free for more than four days, and without symptoms for 24 hours.

Conley said the president’s lab work from a sample taken Monday found “detectable levels” of coronavirus antibodies, though it’s unclear if that reading was impacted by Trump receiving an experimental coronavirus antibody treatment from Regeneron.

“Most of the standard assays for IgG would not distinguish between endogenous (self-made) antibodies and the ones delivered by our therapy. However, given the volume of IgG antibodies delivered in our therapy, and the timing of these tests, it is likely that the second test is detecting REGN-COV2 antibodies,” the company said in a statement.

The first normal thing about the 2020 election