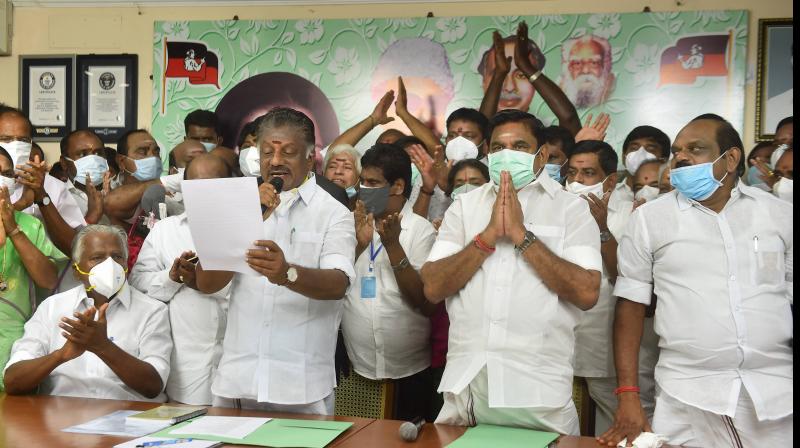 Chennai: Sweets and firecrackers. It was an early Deepavali at the AIADMK headquarters premises on Wednesday morning soon after the party coordinator, O Panneerselvam, named the incumbent Chief Minister Edappadi K Palaniswami as the Chief Ministerial candidate for the 2021 Assembly elections.

The meeting, which was scheduled for 10.00 am, started a little ahead of time with the party headquarters wearing a festive look since morning and the first announcement was on the formation of the 11-member steering committee, which had been Pannerselvam’s long time demand.

Party deputy coordinator K P Munusamy, who was among those working till 3.30 am to bring about a rapprochement between Panneerselvam and Palaniswami, read out the names of the members of the steering committee, which he said was formed on the basis of a decision taken at the General Council. Also Panneerselvam put his stamp of approval for the list by signing on it in front of the crowd.

Munsamy and Vaithilingam, another deputy coordinator, had shuttled between the official residences of Panneerselvam and Palaniswamy to finalise the name of the committee members till the wee hours as that was the last hitch to be ironed out to bring both the leaders together to make the announcement they were united.

Once the truce was called, the entire party leadership geared up for the meeting and trooped to the venue. Pannerselvam arrived by around 9.40 am and he was followed by Palaniswami in another five minutes. Musical bands heralded their arrival with welcome notes and supporters, some of them wearing full face masks with the images of the leaders, cheered them with slogan shouting.

Then the two leaders, along with the other party functionaries, chatted for some time before the meeting was called for order. It was rumoured that they wanted the announcements to be made at an auspicious hour that came before 10 am.

Whatever be the reason, the meeting turned out to be a simple affair with the presentation of shawls, brief expression of thanks and appreciation and several rounds of applause without slipping into long winded harangue that normally marked political meetings.

Then the top brass of the party, including Palaniswami and Panneerselvam, drove down to the MGR memorial. Both of them paid homage to MGR and also J Jayalalithaa at their respective samadhis and then drove away.

When Jayakumar was asked by the media on the steering committee having more Palaniswami supporters, he said that the names were chosen unanimously. He said the show of unity in the party was a huge blow to betrayers and opponents of the AIADMK.

Vaithilingam, to a question on some senior leaders not figuring in the committee, said that there were other vacancies in the party and they would be soon filled up with the senior leaders who were not part of the panel.

AIADMK cadre, both men and women, cheered the leaders for putting up a show of unity with their jubilant gigs and slogan shouting. A marked sense of relief and celebration filled the air as they distributed sweets and lighted firecrackers.

The Gretchen Whitmer abduction plot is a window into American misogyny

Ahead of BJP protest against Manish Shukla’s murder, Mamata shuts down Nabanna

Trump falsely dismisses virus danger: ‘You catch it, you get better, and you’re immune’