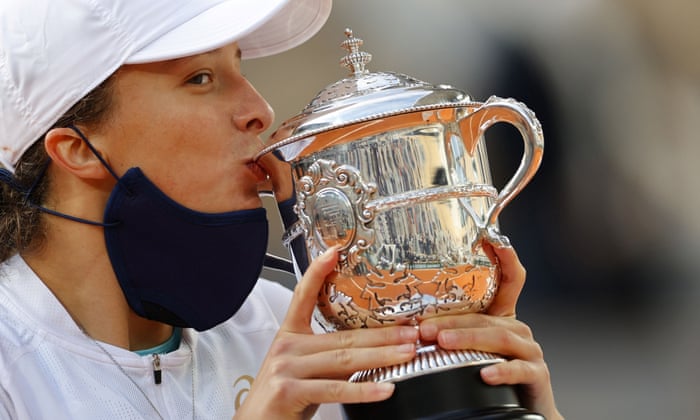 Iga Swiatek, the Polish teenager who arrived in Paris ranked 54 in the world, leaves as her country’s first grand slam champion after a quite stunning victory over the American Sofia Kenin in the French Open final.

Overcome by emotion after winning 6-4, 6-1 in an hour and 24 minutes on a cold, flickeringly sunny afternoon on Court Philippe Chatrier, the 19-year-old said in a trembling voice from under her coronavirus mask: “I haven’t won a tournament in two years so I’m not quite sure what to say, but thank you everyone.”

In the immediate aftermath, she said: “I’m so happy that my family was here, finally. It’s crazy. I’m just overwhelmed.”

Asked about the influence of her father, Tomasz, a former Olympic rower, she blushed, turning towards him in the stands, and said: “He taught me how to be a professional. It’s hard to describe, but he raised me in that way, so I feel pretty confident on court and … sorry, it’s hard to keep my thoughts together. He gave us everything.”

It was the sort of unaffected, charming response that has captivated the small on-site audiences at Roland Garros for two weeks and won a much larger one beyond. She added later: “I need to go back home now, see what’s going on in Poland. I know it’s going to be crazy.”

Swiatek ignored the distraction of her opponent’s injury break in the second set and said: “I was just mentally consistent. Today was really stressful for me, so it was hard.”

Sentiment and the smart money were always with Swiatek. She had breezed past every opponent with discipline, sometimes frightening power and no little style, while Kenin had had to survive four three-setters. Hard-nosed cynics pointed to the tough American’s triumph in Melbourne and her progress to the fourth round here in 2019. What was not in dispute was that character would be the determining factor. 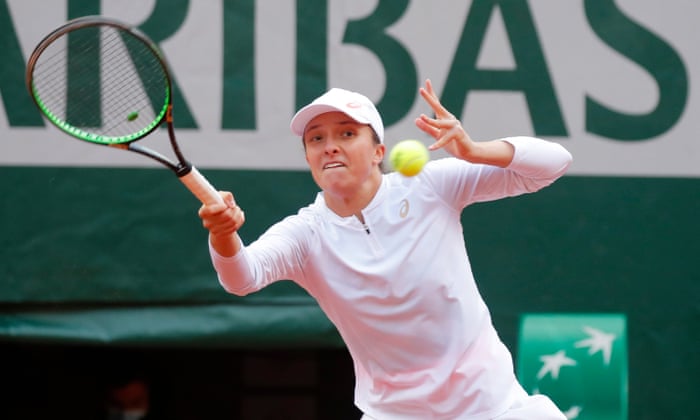 Swiatek carved Kenin’s serve through the autumn shadows that fell pretty much along the top of the service box for an early break. Returning well inside the baseline with the sun in her eyes after switching ends, she broke to 30. When she held comfortably to lead 3-0, she looked to be running away with the match but Kenin, the transplanted Muscovite forged in a rarefied American tennis bubble, is made of stubborn Russian stock. She held, nervously, and broke back to stem the haemorrhaging.

There was much to admire on both sides of the net in the early exchanges, as well as a bit of edge. Amiable away from the court, Swiatek shot Kenin a long, fierce glare when the American pointlessly challenged a line call.

Screeching loudly, Kenin was energised in every shot. Swiatek bided her time, silently but with equal menace. When Kenin, serving to keep the set alive, butchered her go-to double-fisted crosscourt backhand, she looked irredeemably despondent.

She broke early in the second set but took an instant counterpunch flush on the nose as Swiatek found openings where her opponent thought none existed.

Their challenges now diverged. Kenin battled her own game. Swiatek’s was grooved, her mindset more settled. When she panicked Kenin into a cramped forehand from the baseline, she snapped a sequence of five breaks and drove remorselessly to the finish.

Kenin, drowning, took a medical timeout. The fans detected gamesmanship. Swiatek, rugged up against the chill, applauded their cheers. The American said later she picked up her injury in the third round. “After the first set I just felt it was so tight, I couldn’t move. That’s why I had to call the trainer. It just got worse.” 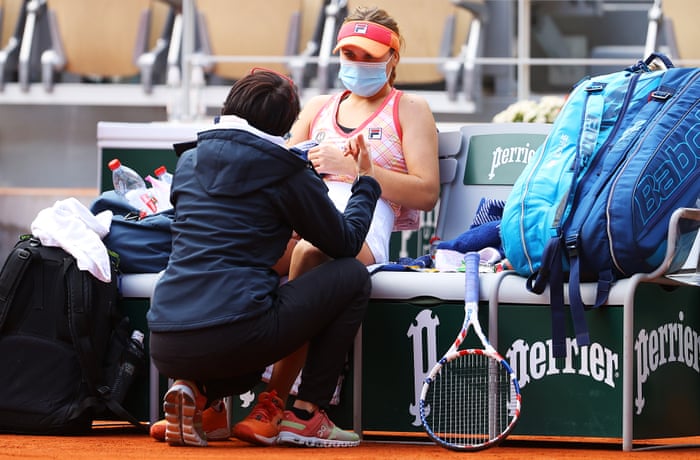 There was no appreciable difference to Kenin’s movement after she bounced back on to court seven minutes later but the winners kept flashing by. Swiatek, who now had the full love of the gathering, looked unmoved. An ace helped her hold to love, secured by Kenin’s botched forehand.

Swiatek continued to torment her with piercing ground strokes at unreachable angles and she raced to a love break and 5-1 with a deft backhand into an empty court.

After an hour and 20 minutes of a match many thought would last a lot longer, Swiatek stepped up to the line where she had begun the match to serve it out. When the girl with the winning smile and the game of a champion slid a sweetly struck angled forehand beyond her devastated opponent, there was no doubt where the crowd’s allegiance lay.

Swiatek dropped to her knees, shaking her head as she stared at the clay for several seconds and could be forgiven any breach of social distancing as she then rushed to hug her family in the sparsely populated boxes.

The numbers and records tumbled like raindrops. Swiatek is the seventh woman in the Open era to win a slam without a seeding (her ranking jumps to 17 and her bank balance from about $1m to nearly three times that) and she is one of eight first-time female winners in the past 13 majors. She is the youngest women’s winner at Roland Garros since Monica Seles in 1992.

One thing is not in doubt: the tone has been set for what should be an intense rivalry for years to come. 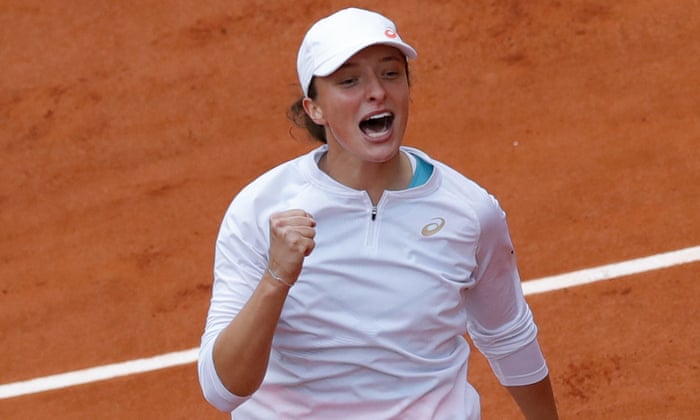 Mats Wilander, seven times a grand slam champion, said on Eurosport: “Iga looked so relieved but also calm, she is going to win so many more – you can see that in her demeanour throughout the whole finals.”

He even compared her playing style of mixing up attack and defence to that of Serena Williams: “You have to go back to someone like Serena, who likes to hit the ball hard, but can keep the ball in play and defend as well. Swiatek can do that as well. She plays within herself yet can play very aggressive.”

He was joined in the river of praise for her by Tim Henman, who said: “Her mentality is so strong when she is so young. Those three elements, the physical, technical and mental are all so important and you see her athletic ability, too.

“When you reflect on her mentality, how calm she’s been, her sense of belonging she’s had out on court, it’s been incredible all the way through. When you add it all up – 28 games she lost to win a grand slam in seven matches – it’s just been a complete domination. She’s such a deserving champion.”

BMW PGA Championship: Tee times for the final round at Wentworth