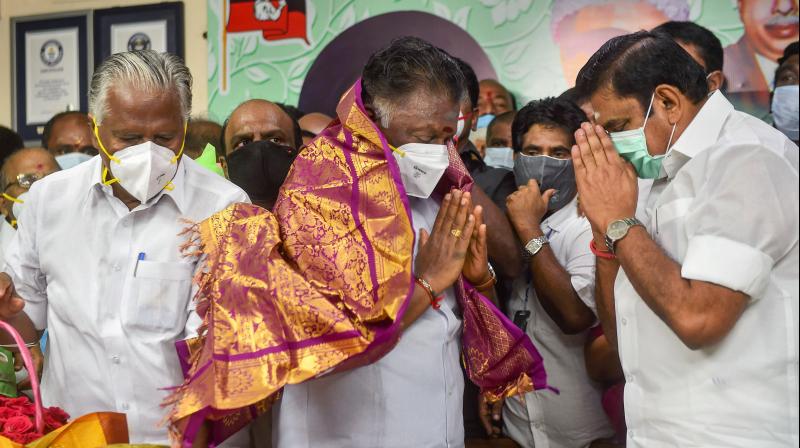 Does the Wednesday morning bonhomie between Chief Minister Edappadi K Palanisami and Deputy Chief Minister O Panneerselvam point to the blowing away of the crisis that had gripped the AIADMK in the last two months, threatening to wreck its electoral prospects totally?

This is the question that people all over the country have been asking ever celebrations broke out at the AIADMK headquarters after the two leaders, who were involved in an acerbic dogfight at the same building just nine days ago, patted each other on the back, exchanging shawls and pleasantries.

Of course for the party cadre, who distributed sweets and lighted firecrackers, there was something to be jubilant about: Better sense had prevailed upon their two top leaders, who were not only steering the government but also the party to at least put up a show of unity.

The cadre always knew that a discord at the highest echelon of the party at a time when the next elections were just about seven months away would not augur well for the poll prospects. That, too, 2021 would be the first time the party would go to polls without a charismatic icon as the head.

The party started by matinee idol MGR was succeeded by J Jayalalithaa, who enjoyed a considerable following for various reasons. Her death in December 2016 had left a void in the party and the present government was inherited by Palaniswami as a legacy of Jayalalithaa.

When Palaniswami, who managed to take over the mantle, was running the government, to put it mildly, to the best of his ability, why did the man who was appointed as his deputy mid-way, suddenly raise a banner of protest as though he was destined to be the Chief Minister?

Perhaps he revealed his heart at the closed door deliberations that were held since August 15 with many party functionaries trying to console him and some trying to incite him to go for the kill. Whatever it was, he knew that creating a rift in the party, which is otherwise perched precariously in the electoral domain, would lead to its total debacle.

Yet if he had gone ahead and demanded his pound of flesh, which is what he believed it was, he thinks he is more entitled for it than the one now holding it. On the other side, if his bete noire was a man keen about keeping aloft the party’s flag high in the air, he would not have resisted the bid of another leader, equal to him in the party earlier, in such a trenchant manner.

By taking an adamant stand, he might have managed to remain the party’s Chief Ministerial candidate. But would that have ensured his becoming the next Chief Minister?  The people of the State might not have voted for a party divided down the line and without a charismatic leader. Yet he resisted with all his might, which went on to say that he was more concerned about his future than that of the party.

Without going into the pet peeves of the two leaders that prolonged the fight till about a few hours before the time they were to tell the world their final decision, one can say for sure that the two leaders agreed for whatever settlement only because they realized that dividing the party would only help their opponents. Well, it was driven hard into their heads by the other leaders.

Probably, externally, the BJP wanted the AIADMK to be united for it seemingly has some plans of riding piggyback on the party to win a few seats in the elections. So if the party goes down the drain with the leaders fighting with each other, it may not help the BJP. But that remains in the realm of speculation as we have only conjectures to support the BJP intervening and keeping the warring leaders together.

Even if that was true, one can safely summarize that the differences have not been ironed out and that they could erupt any time. Whether the party wins the elections and forms a government or loses and shifts to the Opposition side, the factionalism would remain until the party finds a leader capturing the imagination of the people.

The Gretchen Whitmer abduction plot is a window into American misogyny