An Orthodox Jew must daily comply with at least 613 rules “of the Pentateuch”. According to him, kosher is not only food, but also clothing. Blogger Sergey Anashkevich decided to figure out how to dress up religious Jews and why they have such clothes. 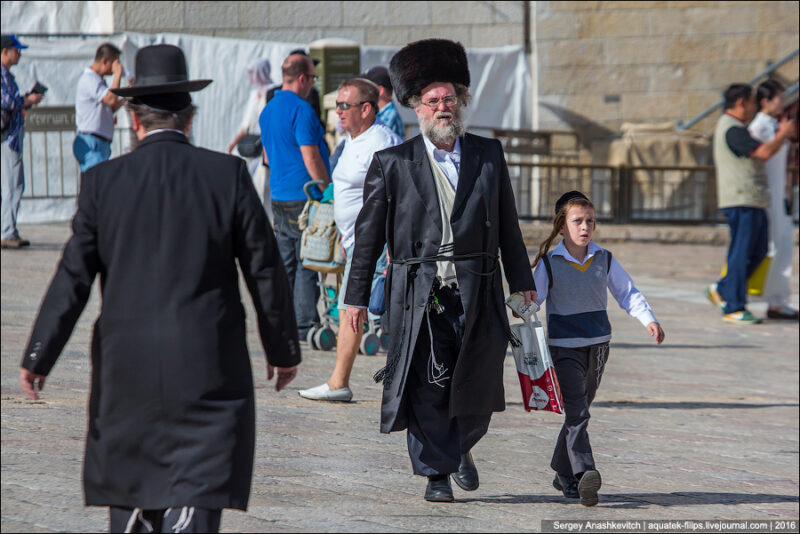 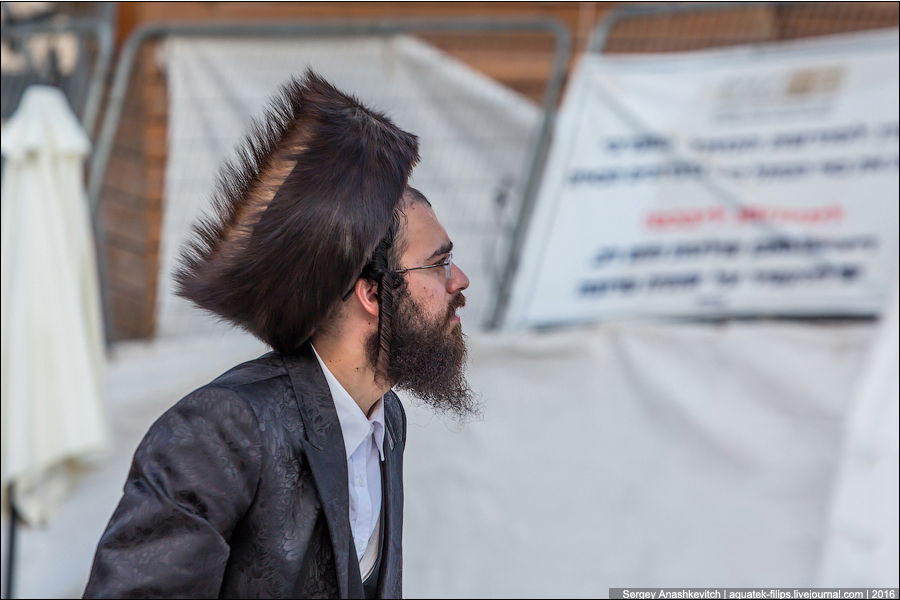 If you think they are all equally black and white, very wrong. It turns out that only black hats there are 34 species, each of which carries information about its owner. Knowing people by the color of the stocking, the material of the Kaftan and the form of headdress can pinpoint: this Yerushalmi is Hasid that admor, it’s a Bakhur, and this is already married.

The Rabbi is Abraham walked in a black coat?

I don’t know, — replied the Rabbi — Abraham went there in a silk robe and steimle. But I know exactly how he chose the clothes. I watched as wearing non — Jews-and dressed differently. 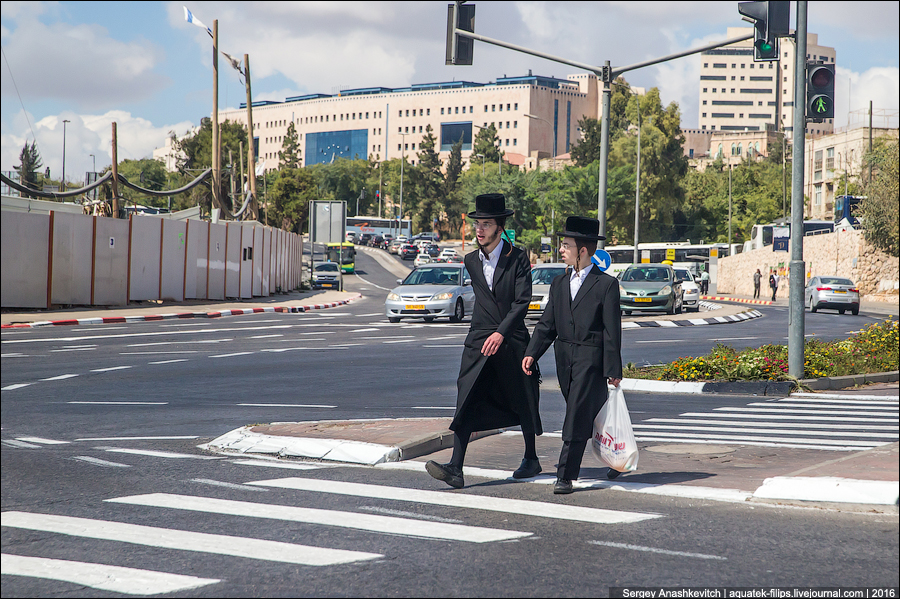 Already in the Bible times, the Jews dressed differently than other people, and, according to the Jewish sages, the people of Israel received the Exodus from Egypt, due to the fact that he had not changed his clothes. The Jewish people from those times scattered around the world. But only the religious representatives having met, will be able to get to know each other as brother in blood by the characteristic species of the black clothing.

In the opinion of the Orthodox: “the Clothes are not so many hides, how many strips the essence of man. It is written: “Be modest before God.” We prefer dark suits because they are modest and neat. That is why in Orthodox Jewry white shirt. That is why God-fearing Jews will never allow themselves to go out in sandals on bare feet”. 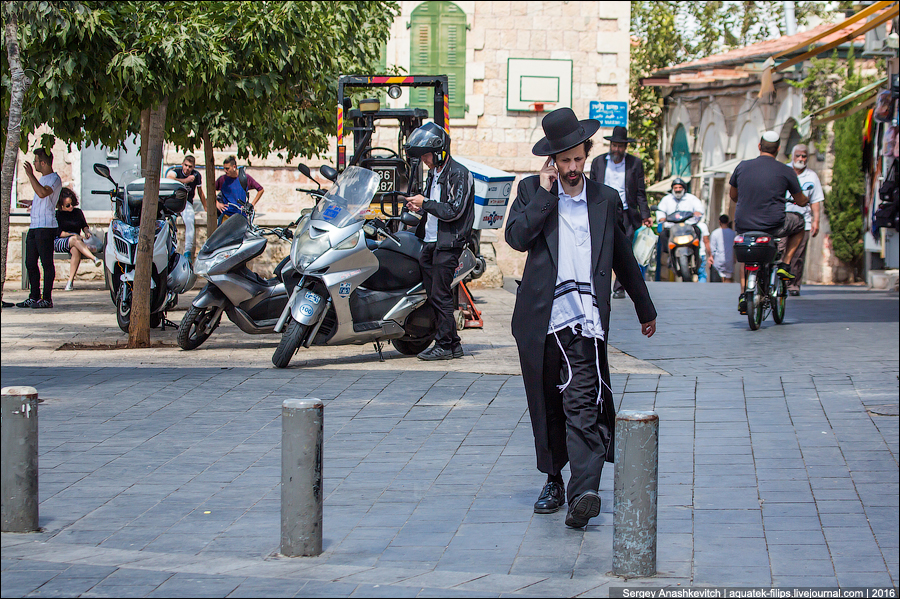 There is a basic clothes — halachic, which puts any Jew who keeps the commandments. This garment covers head and tzitzit with four edges. A mandatory element is a rectangular cloak (poncho) with a hole for the head and four tassels at the edges. The very cloak, called a tallit Katan (or arakapas) can be hidden under clothing and can be worn over the shirt, but the brush always straightened over his trousers. It is made of white wool with black stripes or without them. The corners are reinforced with lining of plain cloth or silk, through the holes in the corners of threaded strings of tzitzis — brush, commanded by the Torah.

If the brush has two (or one) threads of blue color, it is likely that before you Radzinsky or izbicki Hasid. The secret of making Chalet — a blue dye obtained from shellfish Hilson, was lost for almost 2000 years and rediscovered at the end of the last century, Rabbi Gershon-Enoch from Sochi. However, his recipe most of the rabbis was not recognized. The Sephardim and many Chassidim at each corner of the tallit Katan not one, but two holes. In addition, some of the brushes except for four (double) mandatory nodes can be seen from 13 to 40 small nodules on the coils of the filament. On this basis it is also possible to distinguish between members of different communities. 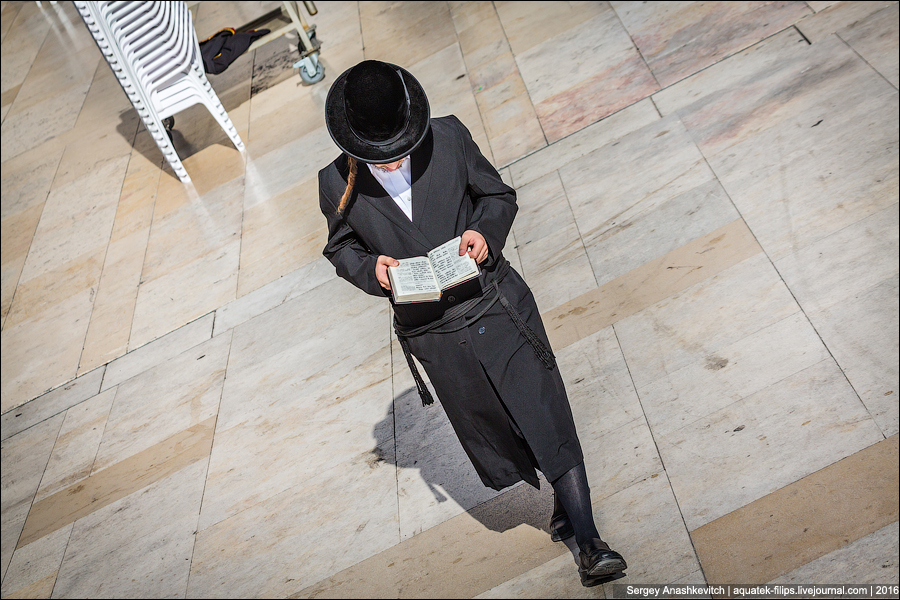 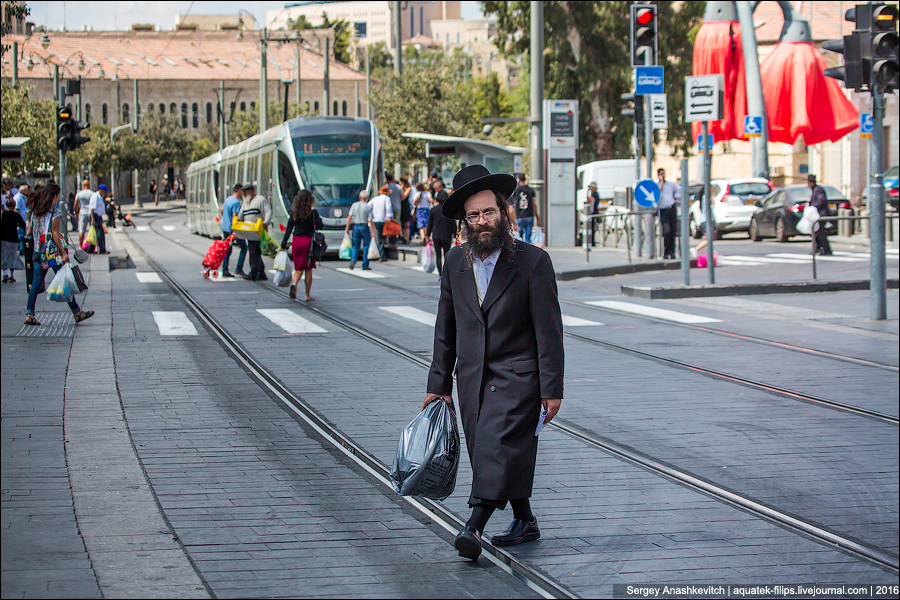 Robes, as a rule, clothes for special occasions: a festive silk embroidered in black and black pattern, Tish-Bathrobe for festive dinners, a yeshiva-a gown made of the cheapest fabric without lining — for studies in the yeshiva or Colle. On Shabbat and Yom Tov many of the Hasidim wear a special black satin Cape — bekeke. And bonnet, and frock-coat, and the robe of a Jew should be tied with a belt, woven from black silk thread or fabric. 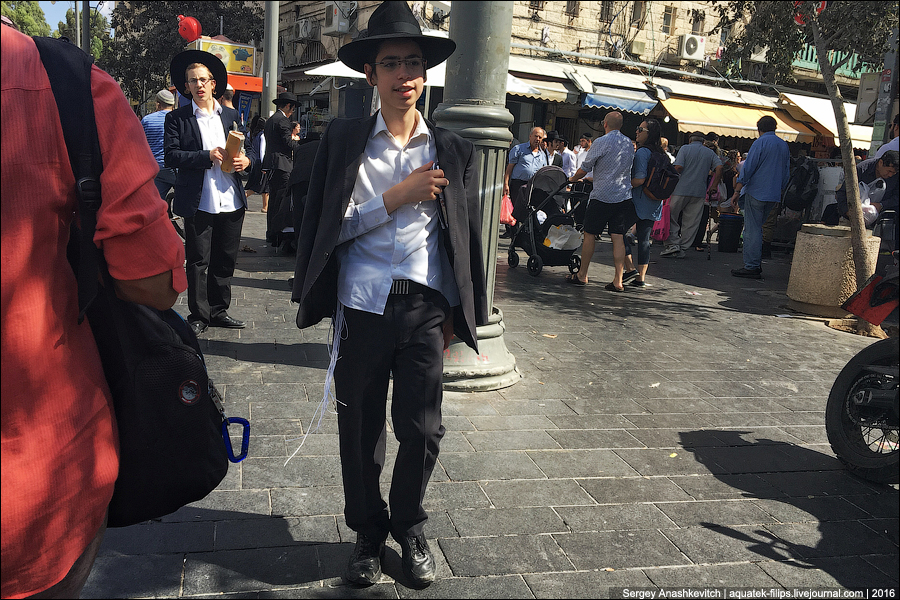 Litvaks in everyday life can wear jackets. Hasidim wear a hood (racl), which is also, of course, there are differences. For example, lapels — notched or rounded — or instead of the usual three buttons — six (two rows of three), so it is samarskij Hasidim. Besides the hood there is still Becici (bekesy), jugsy (Juba). And everything is strictly black. 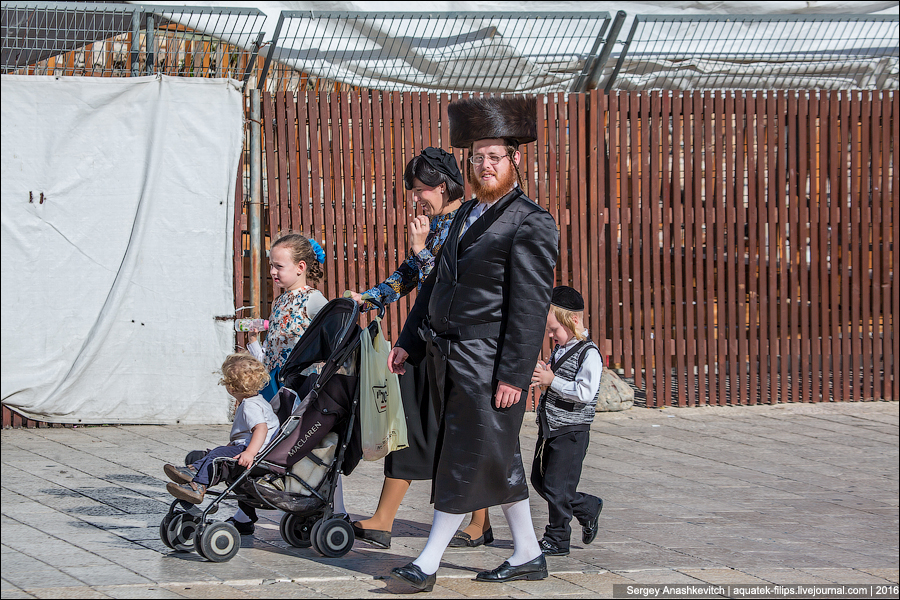 Pants can be either ordinary black or knee — ealb-Goyen. Short pants are of Hungarian Hasidim — they tie the leg with a drawstring under the knee and wear black knee — sokn. In some communities, during the holidays or Shabbat, it is customary to change the black socks to white. Garskie Hasidim tuck regular pants in socks. This is called “Cossack” knee (Kozak sokn). 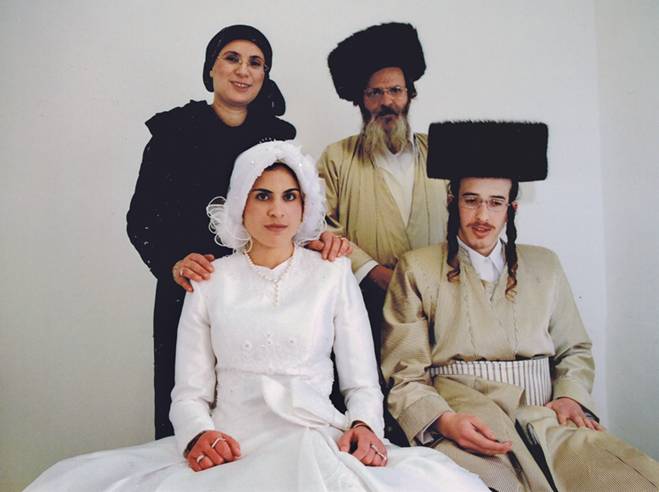 Clothes non-black colors are mostly Chassidim REB Arel and some of Braslavsky and other Hasidim, the residents of the quarter MEO Shearim. On weekdays they look like: plus (flying saucer) on the head, under it the Weiss yarmulke — white knitted Kipa with a brush in the center of the dome. A white shirt, a wool tallit Katan, vest and coat special fabric (captn).

Fabric CAFTA — white or silver with black or dark blue stripes. Produce this fabric only in Syria and smuggling deliver to East Jerusalem. On the Sabbath a flying saucer will replace the Chernobyl or regular shtreimel instead CAFTA silver background Hasid wearing gold. On top of the caftan is sometimes (and in Shabbat and holiday required) draped brown satin Bekes with embroidered collar. 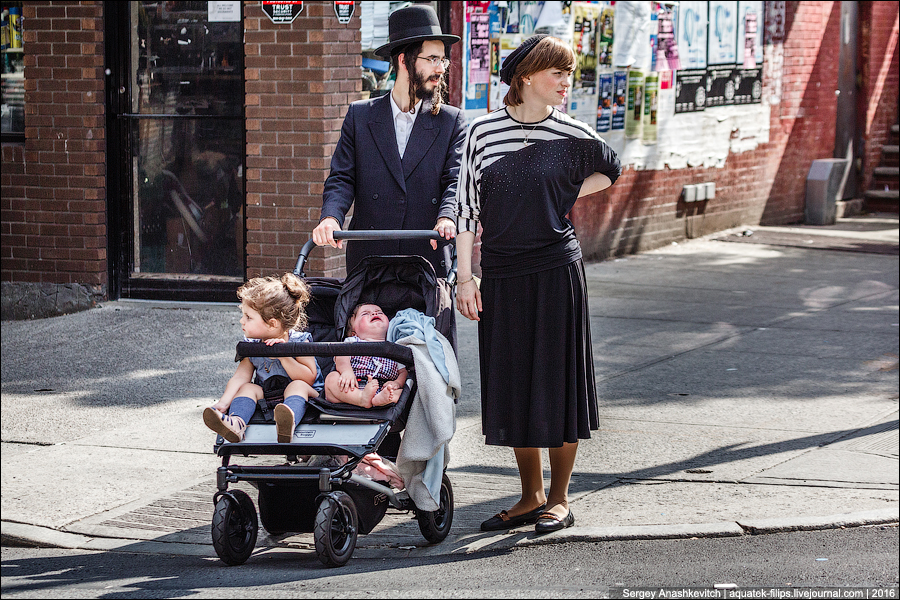 Back to the hats. On top of the bales (yarmulkes) the Jew is almost always wearing a hat or cap. In rare cases, this may be cap’s old European cut, such are usually older Chassidim from Russia and Poland — kasket (casket or dashek). Remotely similar to gray rectilinie kasket cap are children and teenagers in families of Lithuanian Jews. On weekdays, most traditional Jews wear a black hat. The assurances of dealers hats, there are 34 main types, each of which indicates the origin, communal and even social status of the owner. 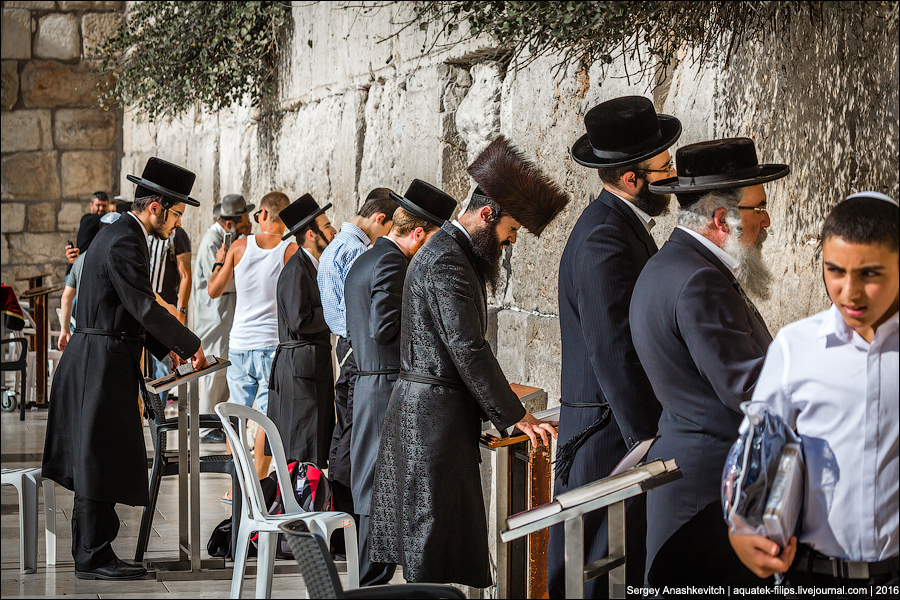 The traditional hat of hereditary Jews, Yerushalmi — plus. It is called flicker-teller — simple flying saucer or super. It has a wide field but low in the middle — 10 cm 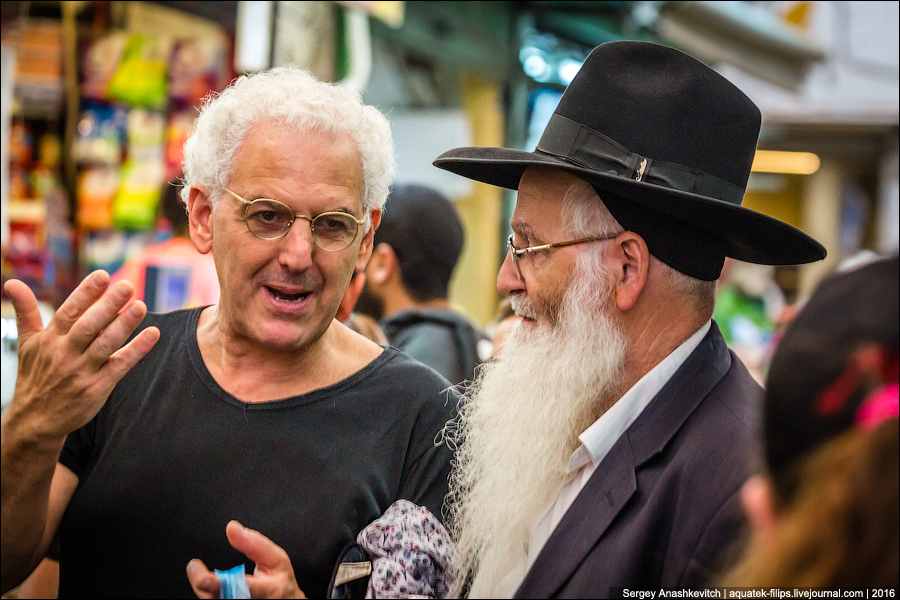 Other types of hats are made of plastic (rather like velvet or even short-haired black fur), hardness is not inferior desyatiletnego plywood. Among these hats, you can highlight Samet, one of the most expensive and luxurious styles, its owner is probably a Hungarian Hasid. 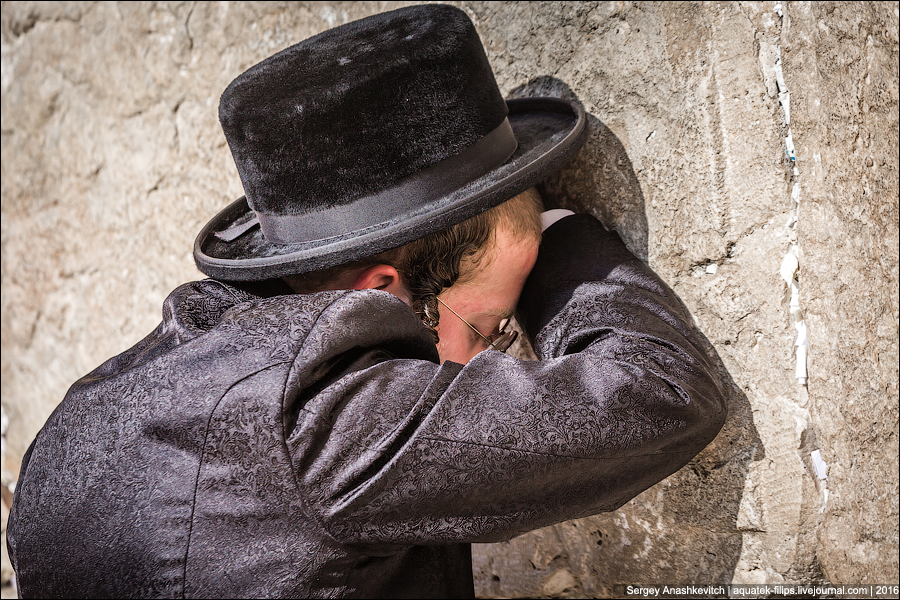 Simple Litvak or Lubavitcher Hasid wear a hat, knach with a longitudinal crease. Litvak, occupying a high position in the community will change, knac expensive Hamburg (or matter-gitl) — no creases or dents. Many Chassidim wear on weekdays the simplest of hat — kapelusz similar to CNAC, but without the crown creases and curves of the fields. They are all made of solid felt. 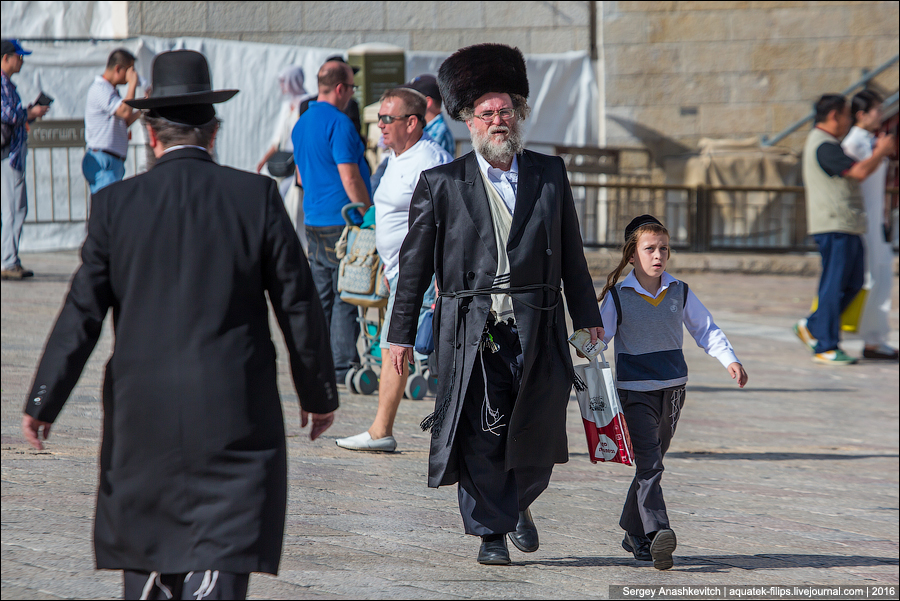 But the “bright” and stand out from all the hat — shtreimel. This is the genuine fur hat. Wear it only and only Hasidim on Shabbat, Yom tov, wedding or meeting with the Rabbi. And more than two dozen types.

Shtrayml is the price can reach several thousand dollars. History shtrayml is started many years ago when non-Jews ordered the Jews of a community worn on the head, the tail of the animal. The purpose of this order was to humiliation and bringing to shame the Jews. The Jews had no choice, and they took the tails of animals and made them hats. 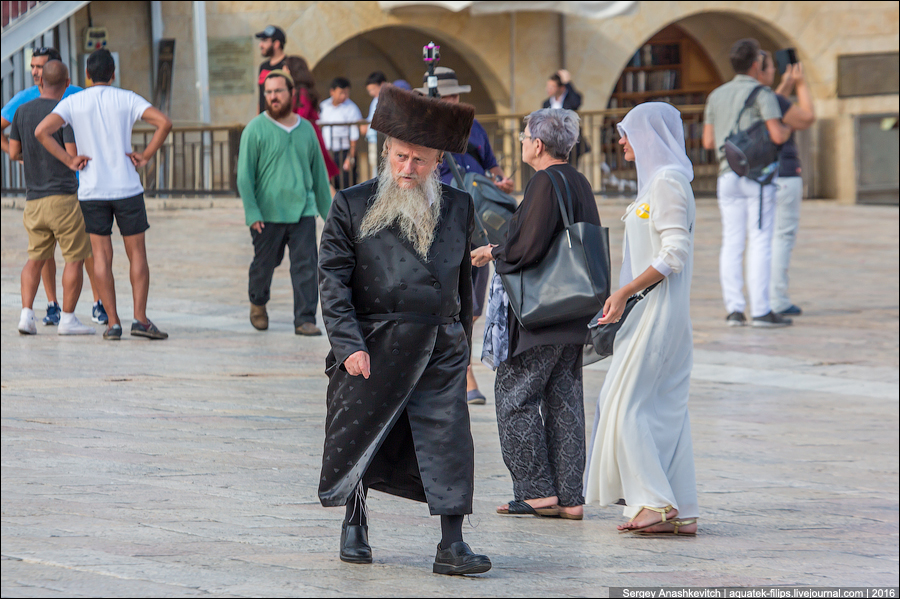 Simple shtreimel are Hungarian, Romanian and Galician Hasidim, hairy chernobl — Ukrainian and spodic — Polish Chassidim. There are special styles shtreimel, which are not entire communities, but only their heads, rabeim. This group can be attributed sobl or coybl — high shtreimel of sable fur, kalpik — something between Spacecom and shtreimel.

Shtreimel is worn by married men. With the exception of only a few dozen hereditary families in Yerushalayim. In these families the child first puts on a shtreimel in the day of age, bar mitzvah — thirteen years.

In 2010, Pamela Anderson, animal advocate and model, wrote a letter to Knesset members, hoping to persuade them to ban the sale of natural furs and Orthodox to give up wearing these stremlow.