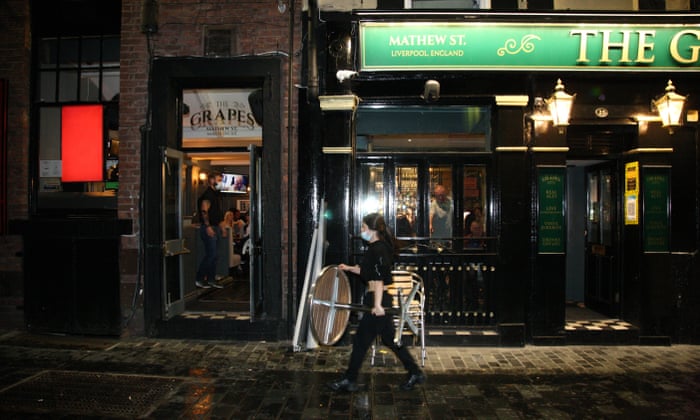 The UK culture secretary has conceded it will be “very challenging” for staff from hospitality businesses closed down under new lockdown rules to live on two-thirds of their wages, as leaders in Liverpool called for more generous support.

Ahead of a Commons statement by Boris Johnson on Monday, where the prime minister will set out restrictions targeted particularly at parts of the north of England, Oliver Dowden defended the government’s new wage-support scheme for areas under new lockdown measures.

Under plans unveiled by the Treasury on Friday, a replacement furlough scheme will pay two-thirds of workers’ wages in hospitality firms ordered to close their doors.

The scheme “compares very favourably” with those in countries like France and Germany, Dowden told Sky News, adding: “So we are taking the measures that are necessary in order to protect people through this difficult period.”

Asked several times if he could live on two-thirds of the current national living wage of £8.72 an hour, Dowden accepted this would be hard.

Johnson will also hold a televised press conference on Monday evening with the chancellor, Rishi Sunak, and England’s chief medical officer, Prof Chris Whitty. This will explain a new system, coming into force this week, under which areas in England will be graded in three tiers as medium, high and very high risk.

Among the areas set to be designated as very high risk is Liverpool.

In a joint statement released late on Sunday, the mayor of the Liverpool region, Steve Rotheram, the city mayor, Joe Anderson, and the leaders of the six local authorities said they expected that pubs and bars, betting shops, gyms and casinos would be told to close.

In their letter, the Liverpool leaders said that while they shared the government’s “grave concerns with regard to the increasing pressure on our hospitals”, a weekend of talks had not come up with a proper package to mitigate the economic impact.

“We made it clear we do not feel that the furlough scheme announced recently is adequate,” they wrote, adding that ministers “made it very, very clear they would not shift and improve the scheme”.

The Liverpool leaders also demanded more money for local authorities, saying these “cannot continue to exist hand to mouth and are currently unable to plan for the medium or long-term”.

Rotheram told BBC Radio 4’s Today programme the city had to accept it was being placed in the highest category of restrictions. “We were told we were going into tier 3, no ifs, no buts. We can either expend energy on that or we can try and get a better deal,” he said.

“Some people like to shout at the wind but if they can’t change the direction of the wind it is important to shield people from its effects.”

Speaking to Sky, Dowden insisted there was a sound evidence base for the decision to close down hospitality venues, after business leaders said they would mount a legal challenge to the new lockdown restrictions.

“I think they will find that if they challenge the government we do have robust evidence for doing this,” Dowden said, citing studies from the US.

Regional leaders have repeatedly expressed fury about not being briefed properly on new restrictions and instead learning about them in newspapers. But Dowden said Downing Street was not behind this. “I can assure you that’s not being briefed by No 10,” he said.

Downing Street’s chief strategic adviser, Sir Edward Lister, headed several hours of talks with council leaders over the weekend and into Sunday evening. During the weekend, senior No 10 advisers and the housing, communities and local government secretary, Robert Jenrick, also held discussions with local authority leaders and mayors from the highest areas of concern.