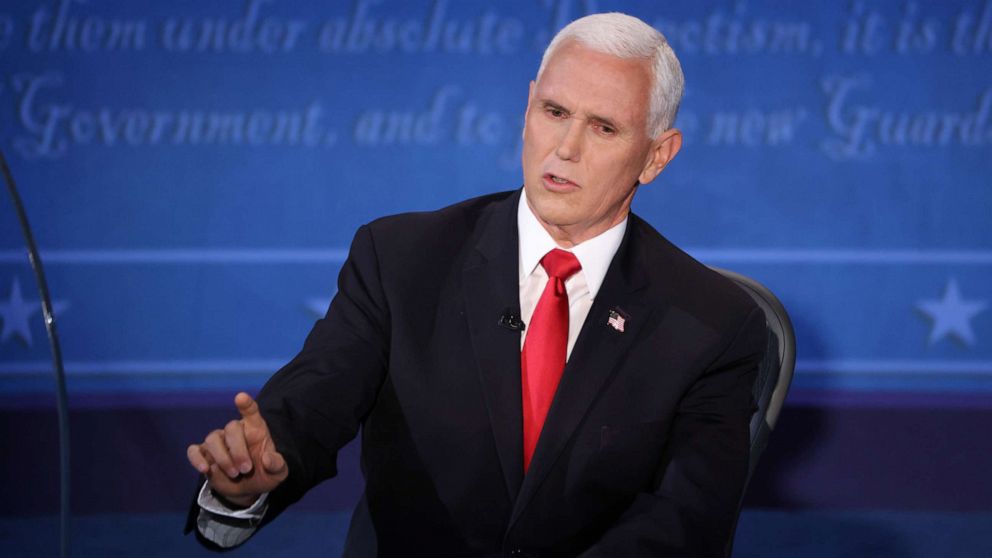 Despite a career of enacting laws that chip away at abortion rights, Vice President Mike Pence artfully sidestepped the chance to talk about banning abortion before a national audience at Wednesday’s debate.

“Vice President Pence, you’re the former governor of Indiana. If Roe v. Wade is overturned, what would you want Indiana to do, would you want your home state to ban all abortions?” moderator Susan Page asked during a segment of the debate about the Supreme Court.

“I’m pro-life. I don’t apologize for it,” he said, leaving the questions about overturning Roe v. Wade or banning abortions up to interpretation.

Instead, he pivoted, celebrating Judge Amy Coney Barrett’s Supreme Court nomination in broad terms and then attacking Democrats with claims about abortion that stretched the truth, including the untrue claim Sen. Kamala Harris and former Vice President Joe Biden support abortions “up to the moment of birth.”

But Pence’s stance is clear based on decades of work fighting to outlaw abortions in his home state of Indiana and nationally.

“I’d like to see Roe v. Wade overturned and consigned to the ash heap of history,” Pence said in a 2016 interview with Fox News, while he was governor.

He’d recently signed a law that banned abortions because of genetic abnormalities. Before that, as a congressman, Pence introduced the first bill to strip Planned Parenthood of federal funding.

And as vice president, he’s frequently spoken at the March for Life, an annual anti-abortion gathering in Washington.

“With pro-life majorities in the Congress, with President Donald Trump in this White House, and with God’s help, we will restore the sanctity of life to the center of American law,” he said at the event in 2018.

Pence’s goal, as stated by the vice president himself in 2018, is well-positioned for success with Barrett’s likely confirmation to the Supreme Court, abortion rights advocates say. Barrett’s confirmation would give conservatives on the court a 6-3 advantage and the chance to overturn Roe v. Wade, the landmark Supreme Court case that gave women the right to abortions.

And yet, asked about Roe v. Wade and banning abortion in Indiana, a state that has two lawsuits currently destined for the Supreme Court to challenge the 1973 ruling, Pence declined to issue the same vocal support as he has in the past.

“I would never presume how Judge Amy Coney Barrett will rule on the Supreme Court of the United States, but we’ll continue to stand strong for the right to life,” he said Wednesday.

To anti-abortion advocates, though, Pence didn’t dodge and was perfectly clear, said Mallory Quigley, who works for Susan B. Anthony List, a nationwide anti-abortion group.

“The vice president said exactly what needed to be said, calling out the extremism of his opponents and educating the American people about the clarity that exists between the two sides,” she said, adding, “Give Mike Pence more time to talk and he’ll go on and on about his pro-life record.”

But the politics at play are hard to ignore, just weeks from the election.

Roe v. Wade is not as controversial to most Americans as it is to Pence, and many other Republicans fighting for re-election have steered clear of the subject ahead of November.

According to a CBS News poll from June, 49% of Republicans support keeping Roe v. Wade as it is, along with 58% of Independents and 81% of Democrats.

“When he gets on the national stage and everyone is watching, including Independents, they punt, duck and dodge because they know the majority of Americans don’t want Roe v. Wade overturned,” said Melanie Newman, senior vice president of communications for Planned Parenthood Federation of America and the Planned Parenthood Action Fund.

But “when he’s at these events with his core supporters, he’s much more forthcoming with his agenda,” she said.

Not addressing it directly on Wednesday “leaves room for interpretation” for voters who might be leaning Republican and are anti-abortion, but don’t believe in making it a national policy, she added.

“So there’s a way to read it where he’s not suggesting that he wants to overturn Roe v. Wade, if you’re looking for that — if you want to believe that that’s where he means,” Newman said.

But it’s not what Pence’s own actions or words reflect, nor President Donald Trump’s, which the then-candidate made clear at a debate of his own in 2016.

Trump said overturning Roe v. Wade would “happen automatically” — if he was elected and had the opportunity to nominate Supreme Court justices — in a 2016 debate with Hillary Clinton.

Nearly four years later, Trump has nominated two justices to the court. Barrett would be the third, and the one who tips the scales overwhelmingly to the right.