The American journal Nature presented the winners of the competition for the best scientific photo 2018, and there is something to see! 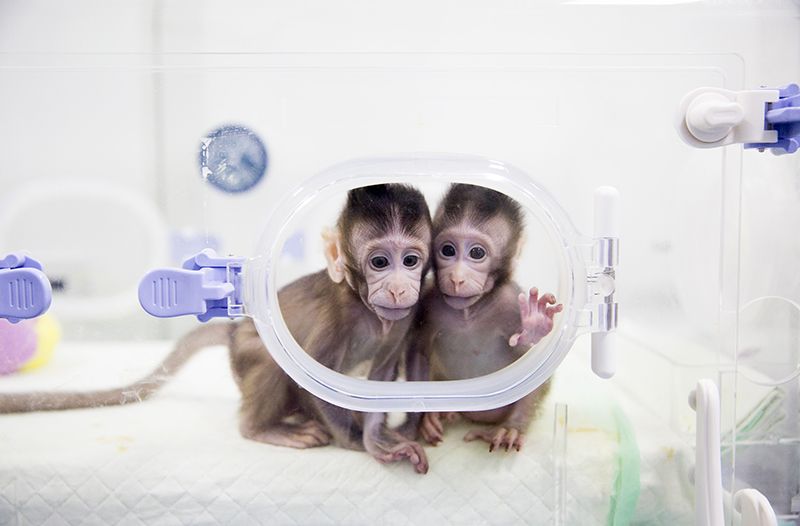 Below you will see vivid images of the natural world and scientific research, appeared before the watchful eyes of the editors of the journal Nature. 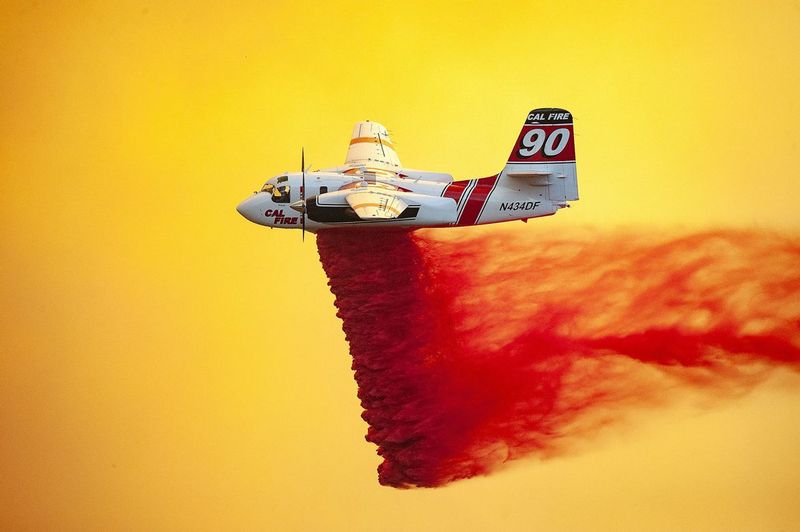 California fires 2018 flashed in the headlines of the world Newspapers. In this photo, the plane drops flame retardant special somewhere North of San Francisco.

2018 would be deadly forest fires and drought from California to Cape town. In addition, this year brought new developments in the field of cloning and imaging with advanced visualization technologies. He also was a grim reminder of the fragility of the existence of some rare species of animals on our planet. 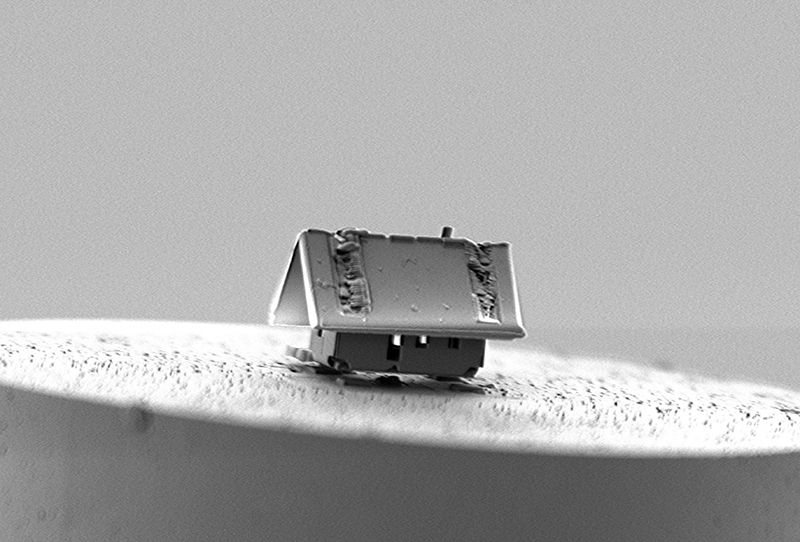 Incredible reduction in the size

In may 2018 the scientific team from the Institute Femto–ST in besançon, France, built this house with a length of 20 micrometers of silica, using tools to nunobiki (focused ion beam, gas injection system for a tiny maneuverable and robot). 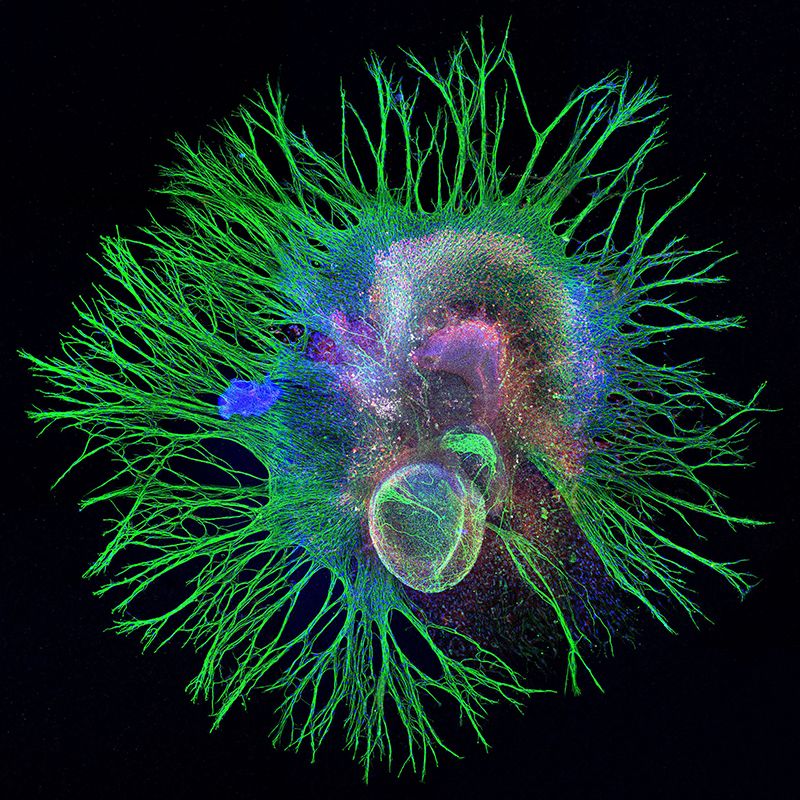 Biologists Stephen Freeman and Lawrence Delacroix from the Belgian University of liège, devoted to the study of cells, won one of the nominations of the contest micrograph Nikon Small World in 2018, held by the company Nikon. Scientists presented the image of neurons in the inner ear of the mouse. 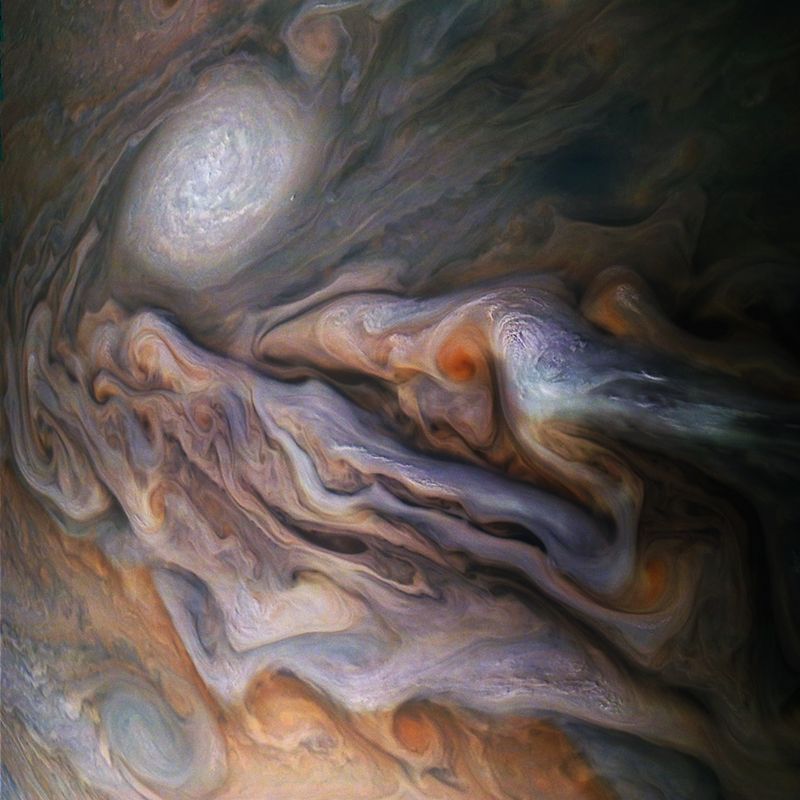 The storm and the whirlwind

Due to space NASA spacecraft “Juno” launched on 5 August 2011 to study Jupiter, was obtained from numerous and varied data about the gas giant and incredible photos. In the Northern hemisphere of Jupiter there is a large array of swirling clouds and a giant storm is presented on the photo in the form of a whitish oval. 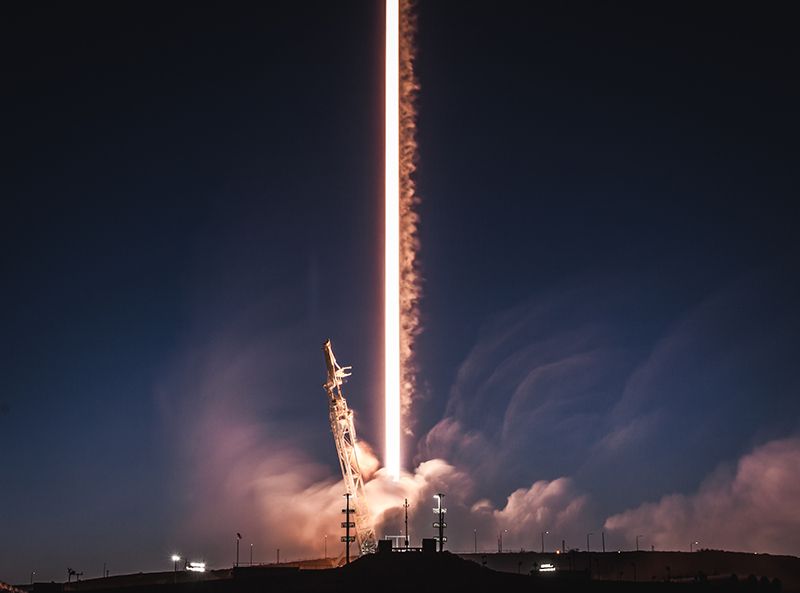 On the way to infinity

Us company SpaceX continued its era of dominance in the field of commercial spaceflight successfully conducting multiple missile launches and their subsequent landing. In February of 2018 in California was launched a radar satellite and two satellite Starlink, which are components of the main project company for the provision of Internet around the world. 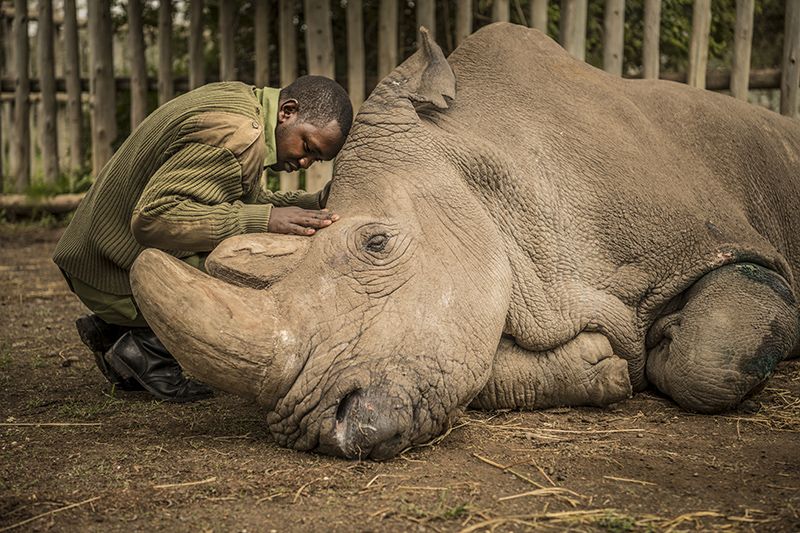 The last days of endangered species

The world’s only male Northern white Rhino, Sudan, died in March in Kenya. At the moment survived only two females, and researchers studying the use of a fairly ambitious method of artificial insemination to save the subspecies (Ceratotherium simum cottoni). 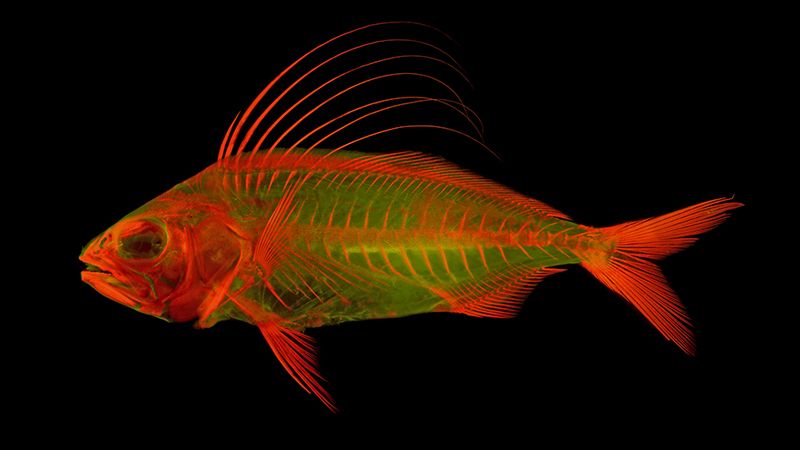 In September, the ecologist V. Leo Smith of the University of Kansas in Lawrence has published a new imaging technique used on one of the species of fish mackerel albacore (Nematistius pectoralis). This method included the separation of muscles from bones, which was done by staining the bones in the picture in a contrasting colour. 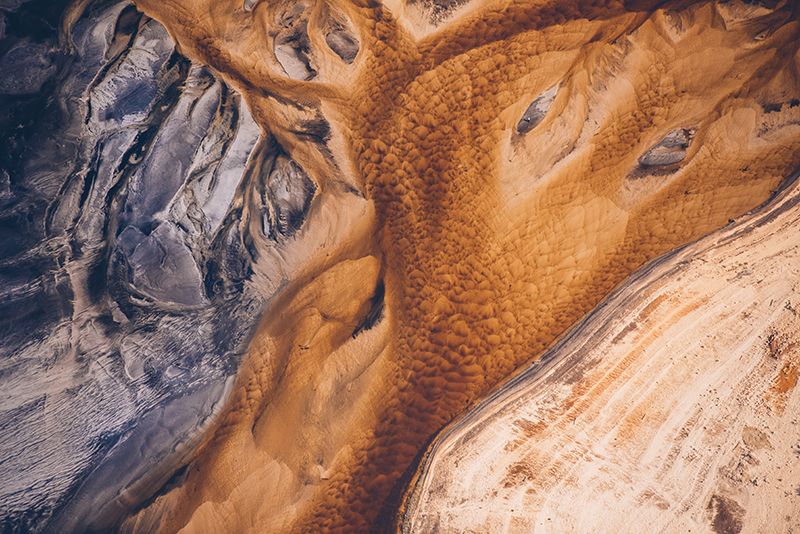 Drought in South Africa has reached a critical level

Lasted three years of record drought in South Africa prompted officials in Cape town to reflect on dramatic action: to completely shut off the water supply to the population. The resident and photographer Kelvin Trautman has captured the scale of the crisis in this image of an empty reservoir in the upper Steenbras dam.

This is Chung Chung and Hua Hua. Gemini–macaques that were presented to the world community of Chinese scientists in January 2018, were the first primates born using cloning techniques similar to that used for the cultivation of Dolly the sheep. 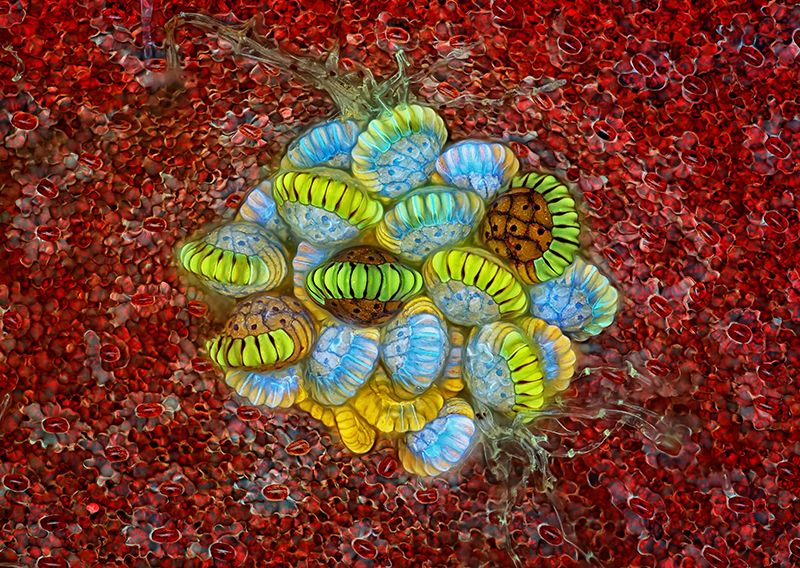 A microcosm of the dispute

It is 10 times larger than the UV image sporangium of a fern (Rogelio Moreno Gill) — took second place in the competition micrographs Nikon Small World in 2018. 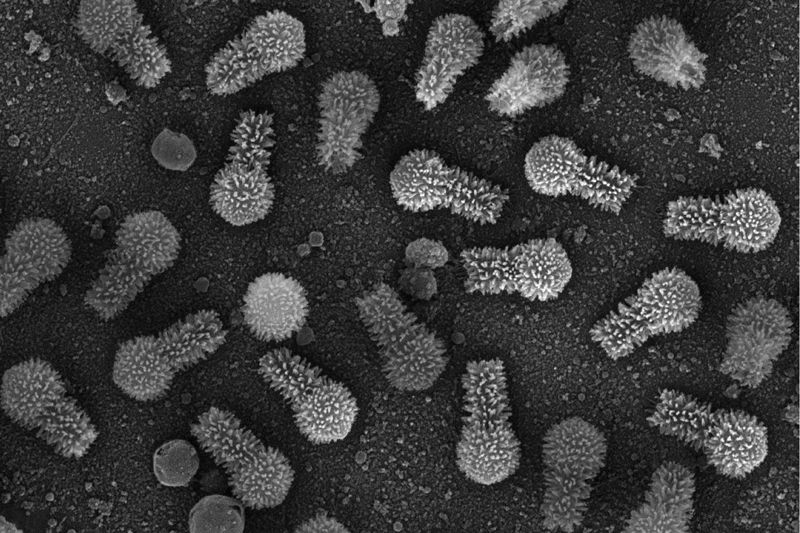 Recently discovered in amoeba, the giant virus Tupanvirus has the longest tail, and largest set of genes involved in the development of protein among all any known viruses. 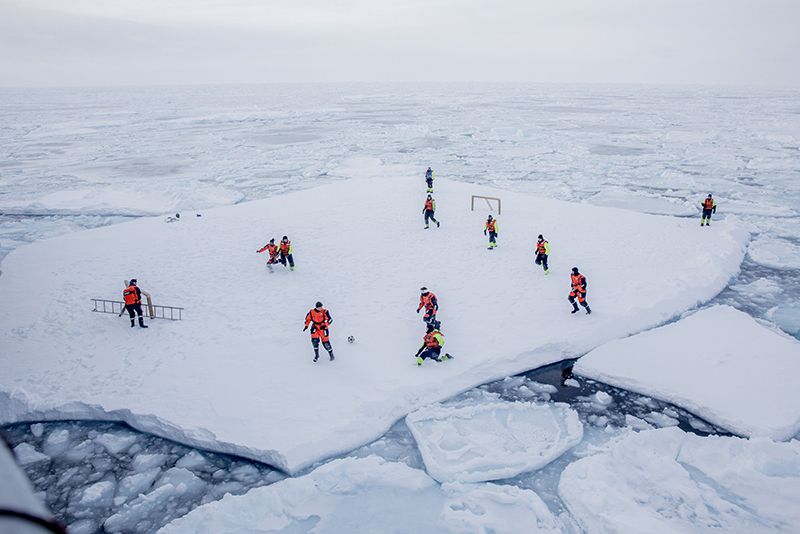 To play football in the Arctic is quite dangerous. While March’s match on the ice near Greenland, armed guards watch out for polar bears, while scientists from the Institute of marine research of Norway and the crew of the icebreaker busy trying to beat each other. 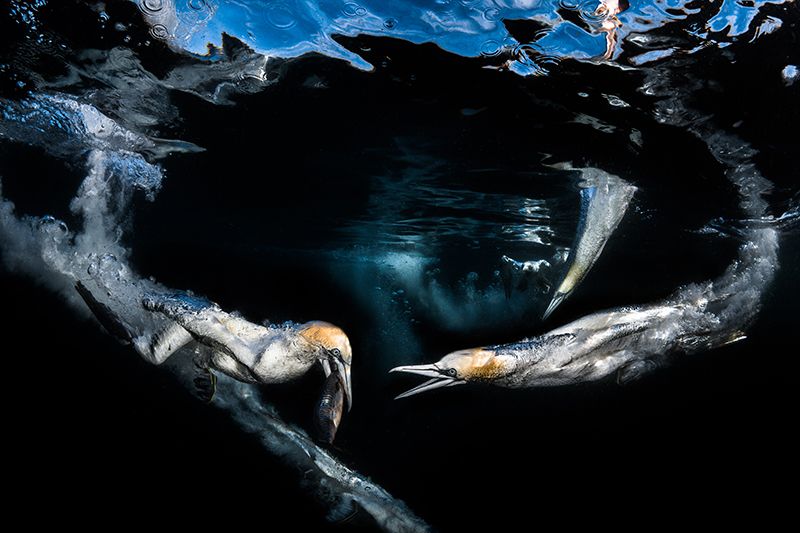 Cormorants in the waters of Scotland dive while hunting for mackerel and other fish. Birds dive from a height of 30 meters, developing a speed of 100 kilometers per hour. This photo took third place in the category “lifestyle” in competition “Underwater photographer of the year”.

PERSONAL VIEW OF THE NEWS

In compiling a list of the most stunning science pictures of the year, each member of the art team of the journal Nature chose the instance in which he saw something special. We present to you this compilation. 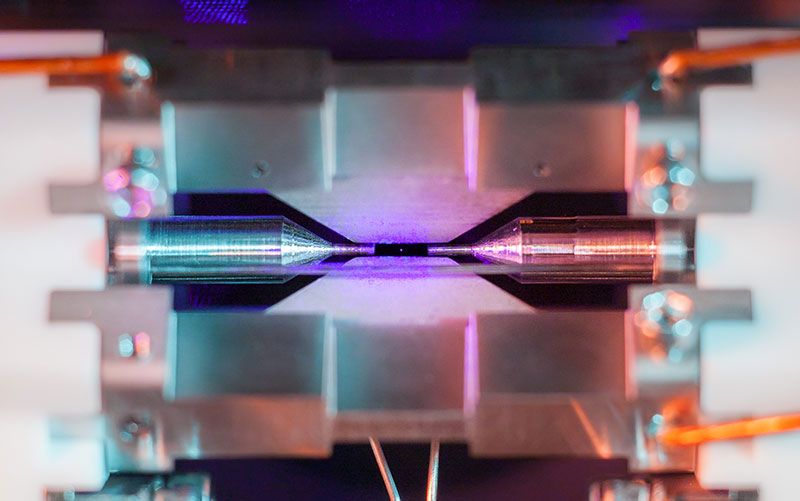 Kelly Krause (art Director): “Look closely at the center of this image and you will see the atom is almost stationary due to the electric field that holds it. This amazing image was taken by David Nagongera at Oxford University, his main goal was for the first time to capture the atom, which can be seen with the naked eye. Amazing what a person can achieve in the laboratory a quiet Sunday morning.” 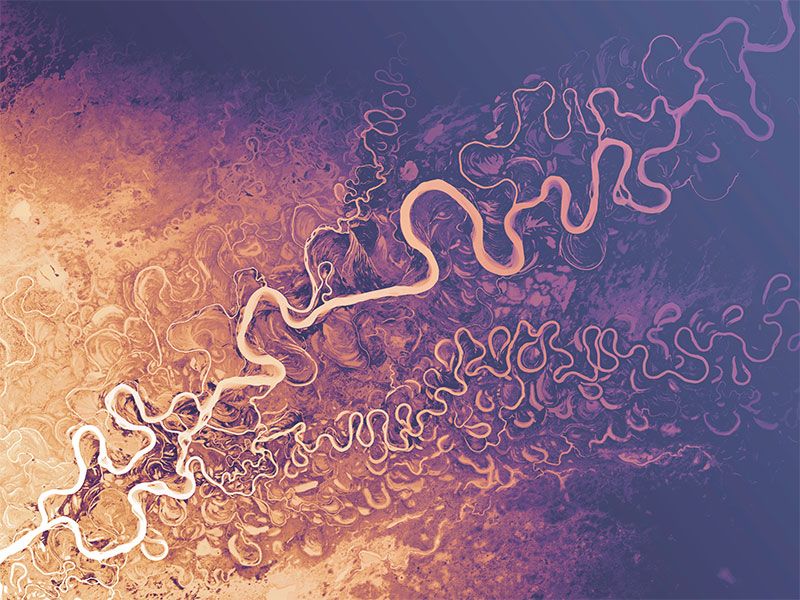 Downstream and up the slope

Wesley Fernandes (art Director): “the River Porcupine and Janjic winding paths carry their waters to the West, to the Yukon river in Alaska. An image in which the colors represent the elevation (darker is higher), was obtained from radar data of the Department of natural resources of Alaska in anchorage. This is a terrific and fun way to visualize the flow of water – this photo really stands out against the multitude of images that we’ve seen this year”. 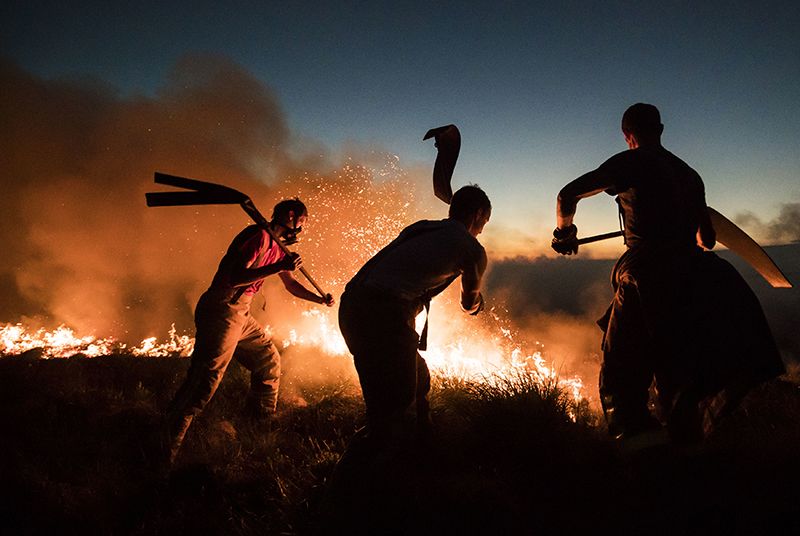 Chris Maddaloni (managing editor): “the Firemen are fighting a forest fire in winter sickly near Bolton in the UK. This year was a huge amount of striking and somber photo related with fire and fire. However, this image is antiutopija combination of past and future, that so strongly I was hooked”. 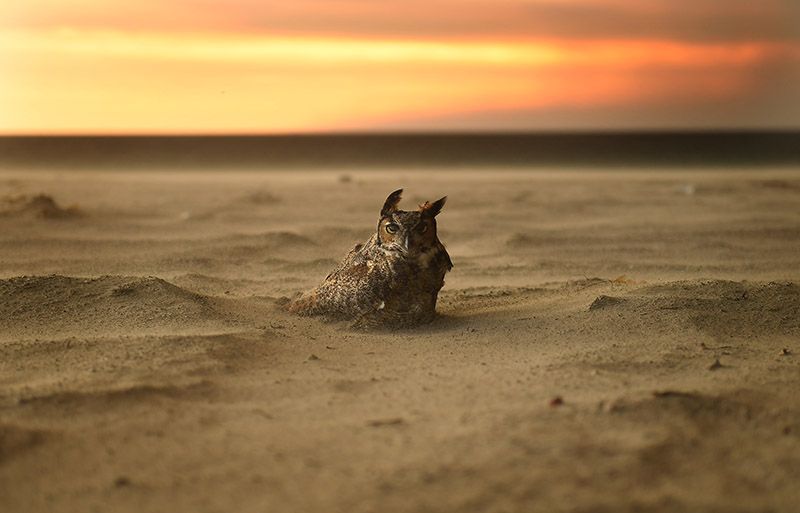 Not a day at the beach

Amelia Hennighausen (editor of the US media): “At first glance this photograph seems serene. The realization that the owl managed to escape from the most destructive fire that ever struck for the County of Los Angeles, and landed in a safe place on the beach in Malibu, is only a temporary consolation. Probably its habitat destroyed, because in the background you can see the raging flames. We often talk about natural disasters terms of human financial losses, but this picture serves us as a stark reminder that wildlife can also lose everything.” 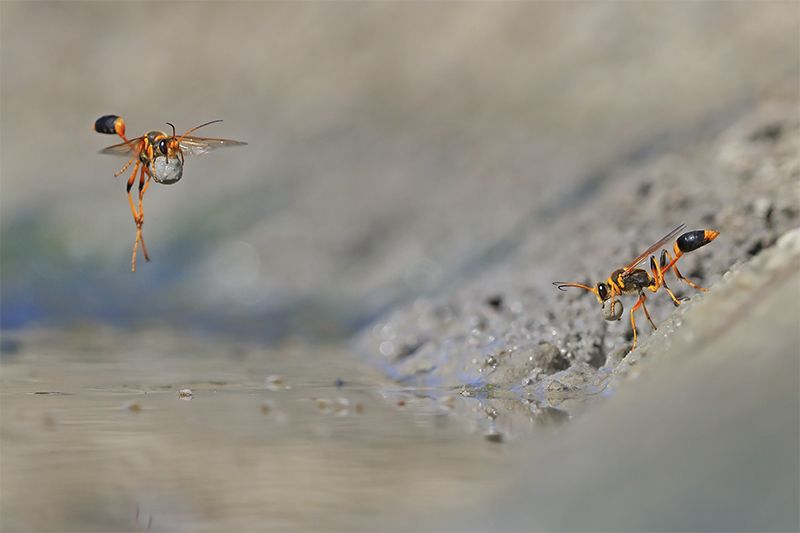 Fion cleverley (editor): “After the female wasps gather mud balls out of the dirt, they cut inside their chamber for their eggs. In addition, there are put paralyzed spiders as a tasty first meal of the day for future posterity, and then the chamber sealed. How amazing it is and at the same time, exceptionally frightening. This stunning, crystal clear picture was a worthy winner in the nomination “life of invertebrates” at the contest “photographer of the year wildlife” in London under the auspices of the natural history Museum in 2018″. 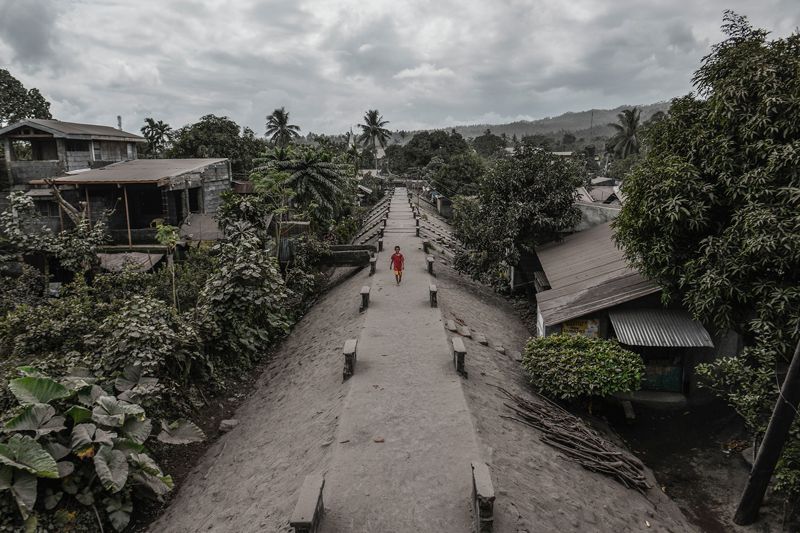 Lizzie brown (editor): “After the eruption of Mayon volcano in the Philippines in January 2018 and the surrounding areas were covered with gray ash. At first glance, it seems that we are looking at a black and white image, but when you see a small figure in bright clothes, apocalyptic way, this picture becomes even more obvious.” 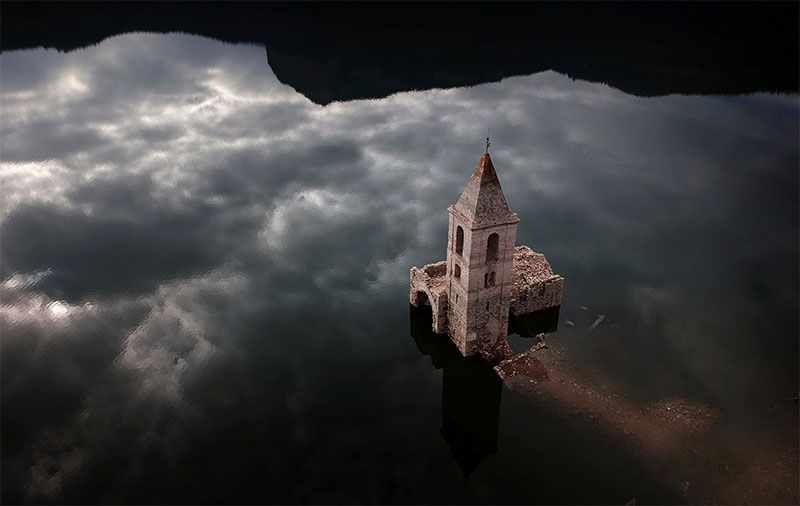 Tom Houghton (editor): “My attention was immediately drawn to this photo of Church of the XI century near Vilanova de Sau, Spain: she emerged from the water after reduced the level of the local reservoir. The illusion, created by the gloomy clouds, which are reflected in the still water reminds me of a surreal scene, like a dream. This is the image that you’re looking at, to understand yourself.”

A YEAR IN MOTION

Along with amazing photos of art editors of the journal Nature worked with such media, which are best to watch in motion. Here are the gifs that they especially liked.

Next to this sea cucumber (Pannychia moseleyi) should be the inscription “do not disturb”. In that case, if something will have an impact on this animal, its skin will begin to produce impressive amounts of bioluminescent light.

In February, the head of the company SpaceX Elon Musk sent his Tesla Roadster into orbit. The car performs the function of a simulation of the payload during a test flight of the Falcon Heavy rocket and is now orbiting the Sun.

Snowfall on the comet

While in orbit around the comet 67P / Churyumov–Gerasimenko, narrow angle camera of the spacecraft “Rosetta” recorded data flashing lines, trapped particles of dust and ice is under review. GIF recording, released in April, was created based on a sequence of images taken during the passage of the “Rosetta” 13 kilometers from the comet’s nucleus.

When you look at the bottom of this baby Stingray (Leucoraja erinacea), the impression is that he seems to be a casual “walking”. The first of February, researchers reported that in these species, is the main neural circuit for the two-legged walk. This discovery suggests that this feature arises as a result of the adaptation of genetic networks, observed in all vertebrates with paired limbs.