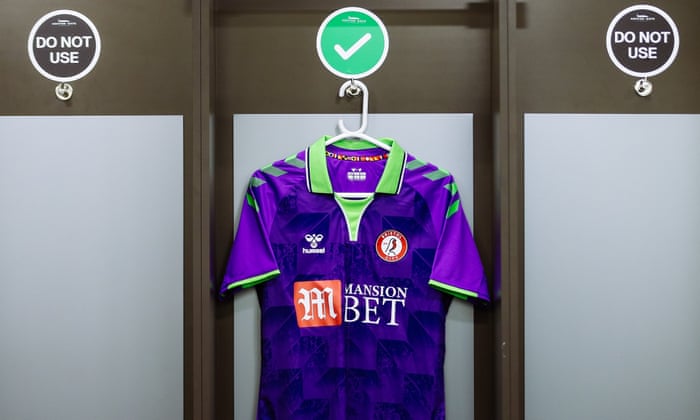 A third of football supporters are put off spending money on their team’s shirt if it has a betting sponsor, according to a survey that reveals widespread support among fans for disentangling the sport’s ties to the gambling industry.

Of the 44 top teams in English football, 26 have a gambling company logo on their chest, as betting firms vie for visibility during games broadcast to billions of people around the world.

But fans in the UK have grown tired of the industry’s strategy of targeting the world’s most popular clubs, according to a poll by Survation, shared with the Guardian.

The survey of more than 1,000 football fans found that a third said they would rather not buy their club’s kit if it has a gambling sponsor.

Nearly half support a ban on shirts emblazoned with gambling company logos, a measure that was proposed by the former Labour deputy leader Tom Watson, who has since taken a job with Flutter, the world’s largest online gambling company.

The Betting and Gaming Council – led by Watson’s close friend and former Labour MP Michael Dugher – said the industry’s “whistle-to-whistle ban” on ads during sport shown before 9pm had reduced commercials during those times by 97%.

But the survey shows two-thirds of fans feel the measure has not done much to reduce the overall level of advertising, with the same number saying betting and online casino or slot machine firms advertise too much to football supporters.

The survey was commissioned by the campaign group Clean Up Gambling as part of the launch of a new coalition against gambling adverts. The partnership brings together multiple groups including the football-focused pressure group the Big Step and Gambling With Lives, set up by Liz and Charles Ritchie after their son Jack took his own life following a gambling addiction.

The director of Clean Up Gambling, Matt Zarb-Cousin, said: “The government would have the backing of football fans if it decided to move against gambling ads, and clubs would benefit from an increase in shirt sales.”

A spokesperson for the BGC said: “While betting helps to provide sports such as football with funding, it also enables TV channels to broadcast more sport than would otherwise be possible and plays a vital role in differentiating legally licensed operators from those in the black market who have none of the safety protections in place with UK operators.

“The BGC has introduced tough new measures to further prevent under-18s viewing betting ads online and our members have agreed that at least 20% of their TV and radio adverts must be safer gambling messages.

“The BGC is determined to drive up standards across the betting and gaming industry and looks forward to working with the government on its forthcoming gambling review to do just that.”