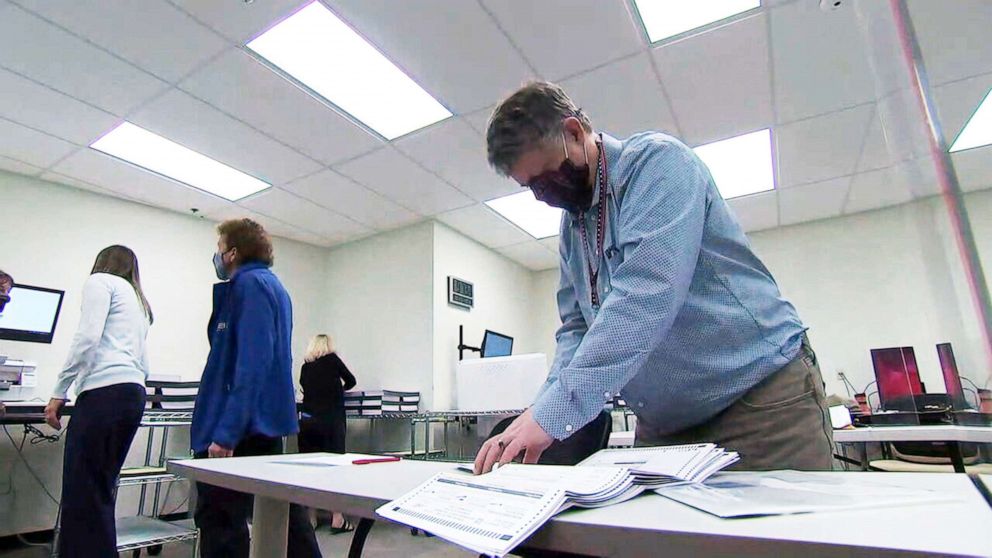 GOLDEN, Colo. — While states across the country have expanded vote-by-mail during the coronavirus pandemic, President Donald Trump has repeatedly claimed that this way of casting a ballot is more susceptible to fraud than all the others by amplifying local election mishaps as well as offering outright falsehoods.

Election officials and experts have repeatedly knocked down the president’s false narrative, insisting the process is and will be secure this election cycle — but some are worried about what impact Trump’s rhetoric will have on voters, many of whom are looking to cast their ballots using a different method of voting than they’re used to.

“Widespread voter fraud doesn’t exist. People on the right and the left have looked for it — it just doesn’t exist,” said George Stern, the clerk and recorder tasked with running elections in Jefferson County, Colorado. “What I’m worried about is that claims — false claims of widespread voter fraud — are going to cause people to throw up their hands and say, ‘Why bother participating? Why would I even vote in a process where I think this is going on?'”

Colorado is one of five states that would have been holding predominantly all-mail elections for the 2020 election cycle, even if the coronavirus outbreak hadn’t upended voting laws and procedures nationwide. The western state has been conducting all elections this way since 2013. Two other states — Oregon and Washington — have done statewide universal vote-by-mail elections even longer. While 2020 is the first year vote-by-mail will be utilized statewide in Hawaii and Utah, mail-in voting was widely used in both states before this year. By 2018, 98% of Utah’s predominantly Republican electorate lived in counties where elections were conducted by mail.

Because of the pandemic, those five states are being joined by California, Nevada, New Jersey, Vermont and the District of Columbia in proactively sending out ballots to active registered voters. And in Montana, most counties — 45 out of 56 — have opted to conduct the November election by mail.

Research has revealed little evidence of mass voter fraud in the United States’ history. While it’s not an exhaustive list, the conservative Heritage Foundation has found just under 1,300 proven instances of voter fraud since 1979, out of hundreds of millions of votes cast.

Yet despite the lack of evidence, the president’s attack on mail-in voting seems to have triggered his base.

“I absolutely think if you try to send in a mail-in ballot, it’s either going to be dumped in a wastebasket somewhere or not even be counted,” one Trump supporter told ABC News.

Michigan plumber John Pavlik suggested voters dump their mail in-ballots in a toilet he put in his front yard, but when police showed up, he insisted it was a joke.

“I think we all just want integrity in the next election,” he said.

Pavlik is exactly the kind of voter Stern is worried about, so Stern gave ABC News a behind-the-scenes look at the vote-by-mail process, eager to show off just how secure mail-in voting is in Colorado.

Despite overseeing elections as the county clerk and recorder, Stern can’t even access the elections warehouse himself — the director of elections has to let him in.

Each of the 35 ballot drop boxes in the county are monitored 24/7 by video surveillance, something officials can view on what they call “the Hubble.” In Georgia, a battleground state that only implemented ballot drop boxes this election cycle, the drop boxes are also video-monitored at all times.

“They’re on surveillance whether they’re coming in at three in the morning, or 6 p.m.,” Stern said. “We use this both to make sure that nothing’s going wrong and, you know, nothing bad is happening, but also it helps us manage crowds.”

In the counting rooms, cleaning crews aren’t even allowed in, Stern said. Election officials have to vacuum the room themselves, and take the trash out into the hallway — that’s how seriously election officials take maintaining the security of the ballots.

In Colorado, as the ballots arrive, each signature is checked by machines and a bipartisan team of judges trained by FBI handwriting experts. Less than 1% of signatures are ever rejected.

Stern explained that “every time you’ve every voted, filled out a voter registration form, [or] visit the DMV,” another signature would be added to a voter’s record.

“That bipartisan team can usually say, ‘Well, actually we can tell that that is the right signature and accept” the ballot, he said.

Then the ballots are counted by machines that Stern says cannot be hacked. He showed ABC News the fiber optic cable for the department’s system, which is visible in the office. It’s completely internal, he said, so while results can move throughout the system, the system itself is not connected to the internet.

This week, Jefferson County invited election judges from both political parties to participate in what they call a “logic and accuracy” test. If a ballot has a problem, the team works to make sure the vote is counted.

He showed a ballot that had a red border around it, indicating there was a problem — in this case, an “overvote.” The voter had checked both candidates’ names, but then wrote next to one candidate, “no,” and next to the other, “yes please.” The election officials can then manually deselect the vote for the unintended candidate, and keep the vote that the voter actually wanted to cast.

Ballots in Colorado are counted starting two weeks before Election Day, Stern said, but the actual tabulation of those ballots doesn’t happen until polls close in the state at 7 p.m. local time, at which point officials literally click a button to tabulate the vote thus far.

While states like Colorado have robust systems in place to handle nearly universal mail-in voting, some are worried about how well a state like Nevada, which is sending ballots to all active voters for the first time, can handle the potential influx.

Wayne Williams, a Republican who served as Colorado’s secretary of state, is one of those people concerned about whether some states are ready to scale up a system that other states have taken years to perfect.

“Some of those states who were wanting to move to the system may not have an accurate signature database,” Williams said. “It can affect [the outcome] tremendously … if you don’t count the right ballots, you can shift an election by a point or two.”

Williams added, “I hear rhetoric from both sides saying they’re always safe, or they’re always fraudulent — neither of those is correct. If you do it right, you can have a safe system.”

The Trump campaign and Republican National Committee sued Nevada’s Republican secretary of state to stop ballots from being mailed to all active voters, but their lawsuit failed.

“We don’t have a prevalent issue of voter fraud in this state,” said Aaron Ford, Nevada’s attorney general. “We’re not scared of Mr. Trump. We’re not intimidated by him, and we will do all that we can again to exercise this franchise and to protect the exercise of this franchise.”

Experts acknowledge there are sporadic cases of ballot trouble around the country. In New Jersey, a mail carrier was arrested Wednesday on charges that he threw mail into dumpsters, including nearly a hundred ballots. The discarded mail was recovered from the dumpsters and recirculated, so it reached the intended recipients.

Los Angeles County is apologizing after 2,000 ballots were misprinted without the presidential race on them.

And last week, the president tweeted about 100,000 misprinted ballots sent to voters in Brooklyn, New York. According to the New York City Board of Elections’ executive director, new ballots were being sent to all potentially impacted voters, with the third-party vendor bearing the costs.

Playing up incidents that officials insist are relatively minor or totally bogus is part of a strategy, political experts say, to enact tougher voting restrictions.

“That tends to reduce turnout for people in cities. It tends to reduce turnout for poorer people, for people of color,” Seth Masket of the University of Denver Center for American Politics, told ABC News. “Today, that tends to mean Democrats more than Republicans … [Trump] is concerned about possibly losing this election, and he’s trying to raise concerns that he will only lose if it’s a fraudulent election.”

Utah, which has also used mail-in voting for the last seven years, is a heavily Republican state using a system that’s now under attack by a Republican president.

He hopes that despite rhetoric from the president, cooler heads prevail on election night.

“The best course of action is not to assume, ever assume, a conspiracy,” Brown said. “Just be patient. Our clerks in every county work incredibly hard, and they have processes in place, and we just have to wait and let the process work itself out.”

Elections officials on both sides of the aisle hope that when voters cast a mail-in ballot, it’s also a vote for keeping the faith and trust in the system.

“I would not pretend to speak for the president or to psychoanalyze why he’s doing what he’s doing,” Stern said. “I will say that we have had seven years of experience of universal vote by mail in Colorado. We have broad bipartisan support for it, and we can say unequivocally that it is extremely accessible and extremely secure.”

At debate, Mike Pence didn’t say what he has before: He supports overturning Roe v. Wade