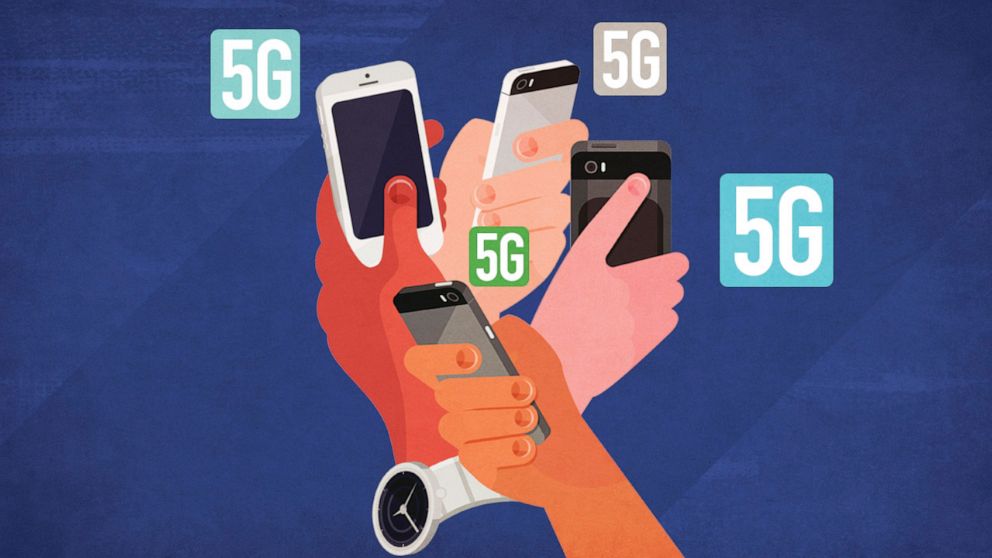 What many view as the next paradigm shift for mobile technology — the onset of “5G” — has set the tech community abuzz with its hype and possibilities.

Many are expecting Apple to unveil its first-ever 5G device on Tuesday, ushering in a new era for iPhone users. Ahead of the event, here is everything to know about the lightning-fast 5G technology.

“We honestly don’t know what it is going to bring to the table: right now we see it as 4G on steroids,” Myriam Joire, a tech industry consultant and host of “Mobile Tech” podcast, told ABC News. “But 4G itself allowed things like Snapchat and Instagram Stories, which we couldn’t have predicted.”

The first major leap forward in cellular technology began in the mid-70s to mid-80s with 1G, the first time people were truly able to communicate wirelessly. In the 90s, 2G arrived, which revolutionized cellphones by creating a universal standard across various networks and digitalized phone calls. In the late 90s, 3G rolled out, which provided the most basic internet access and data to phones. Finally, in the late 2000s, came 4G — which offered faster connectivity — prioritizing data and allowing users to watch things like YouTube and Netflix from one’s phone.

“Every generation adds a thing,” Joire said. “5G just explodes that to a whole new dimension.”

At its most basic level, 5G is the “new generation of mobile technology,” according to Sandro Tavares, the head of 5G and Mobile Networks Marketing for Nokia, which has been working to provide 5G networks for the major service providers in the U.S.

“It is focusing, of course, in delivering data and voice but it does so in a slightly different way that actually allows us to not only provide a better speed, so you will have much faster data speeds than you will have with 4G, it also addresses one other aspect, which is latency,” Tavares told ABC News. “Latency is the amount of time that a set of data takes to go from point A to point B.”

Joire added that 5G “promises much higher speeds, much larger capacity and much lower latency, which is basically how fast does the network react to things.”

“The reason there is a lot of brouhaha around it is because it promises, at least, to bring a whole lot of new applications to the market,” she said.

She addd, “The rational thing to say is it’s 4G on steroids. But at the same time 4G brought us so many things that we didn’t have with 3G, so what’s 5G going to bring us?”

How fast is this?

“If you’re talking about the maximum speeds you have been seeing in the field right now, they are around 1.5 gigabits per second,” according to Tavares. “If you look into the theoretical limits that the industry has been working towards, we are expecting to get up to 10 gigabits per second.”

For example, Tavares said if you’re trying to download 4K episodes of an entire series, “you’re talking about doing that in a minute or so.”

“I saw the other day someone mentioning that with 5G at top speeds you would be able to download the full ‘Game of Thrones’ set of episodes in just a few minutes,” Tavares added.

Beyond cellphones, how will 5G impact our lives?

“Think about how many devices we have in our home,” Joire said, such as smart thermostats and speakers. “They all use Wi-Fi. What 5G is promising is forget Wi-Fi, just use 5G.”

“Everything is connected, and it’s all wireless, obviously the network still installs power, but the base stations of the home might be a thing of the past,” she added.

Outside of the home, “the scale is much broader,” Joire added.

“Imagine a future, maybe five years from now where every Tesla has 5G and every Mercedes has 5G, and they talk to each other,” she said. “It doesn’t rely any more on the sensors in the car, it can rely on the communication because the communication is very fast and can send large amounts of data.”

Tavares noted that “one of the biggest differences that 5G is going to bring to the future” is that it is “not only going to focus on cell phones, but it is going to be connecting things as well.”

“5G is the first mobile-access technology that was born to enable IoT [Internet of Things] from the beginning,” Tavares added.

The IoT refers to the interconnectivity of everyday devices through the internet, which allows them to communicate with each other independently. IoT technology has also caused a lot of excitement for how it can be implemented in the creation of so-called Smart Cities, where data shared between devices all throughout the city can be used to greatly improve efficiency in everything from transportation to power.

In the near future, Tavares said he predicts “5G capabilities being available in all kinds of devices” that go “much beyond simply phones or the traditional devices.”

Tavares added that he especially sees the tech being useful in the health care industry, as a way to improve efficiency, and as well as in education.

“If you use 5G as the underlying connectivity layer for virtual reality and augmented reality education,” Tavares said, “you can push training calls to anywhere in the world and the students or employees that are being trained are going to be able to use VR and AR devices to have an experience that are similar to if they were inside the classroom.”

“A lot of new knowledge is going to be created and we are going to have to train people a lot faster,” he added.

Is this going to be a lot more expensive?

Tavares does not predict prices going up that much, saying, “All these things are regulated by the market.”

“If you look into the initial packages that the service providers have been offering with 5G, I wouldn’t say they are much more expensive than what we’ve seen for 4G, and a lot of them provide a lot more services,” he said. “It is in general regulated by the competition, so I wouldn’t expect services to be that much more expensive.”

Joire added, “It’s definitely an extra cost at this point, but they charged more for 4G back in the day, eventually it gets normalized. You’re going to pay a premium for the first three years but then it’s going to be maybe even cheaper.”

When can we expect to see it widely available?

“The initial deployments are already out,” Tavares said, adding that all four major operators in the U.S. currently have at least some limited 5G capabilities.

“The deployments are still not widely spread, so with most of them you have a few hot spots,” he added. “This is a natural step of the implementation of new technology.”

“This will continue to grow through the end of the year and through 2020,” Tavares said, adding that he predicts it is still going to continue to evolve and expand “throughout 2021, 2022 and so on.”

There is a reason why Apple’s most recent phone, the iPhone 11, didn’t have 5G capabilities.

At the time the iPhone 11 debuted in September 2019, 5G was only “rolled out in select cities,” Joire said. Even within those cities, most of the 5G services were confined to just a few blocks.

Joire added that the same thing happened with the 4G rollout, saying, “the first 4G phones were terrible, they lasted two hours on the charge.”

Yet now, pretty much everyone uses a 4G phone.

As of October 2020, ahead of the iPhone 12 debut, 5G is now available in more than 100 cities, Digital Trends. The list is also growing as more and mobile service providers scram to make the upgrade.