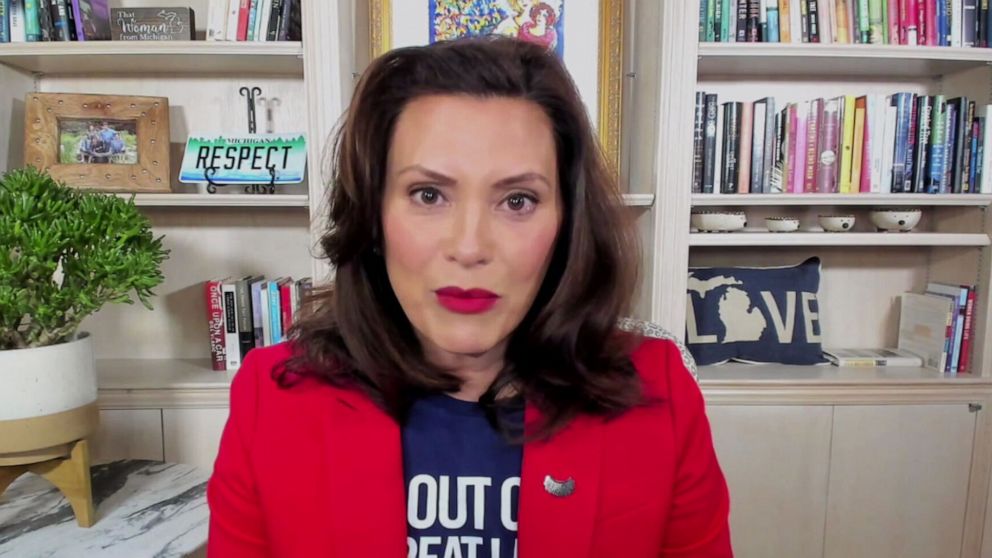 Michigan Gov. Gretchen Whitmer, the alleged target of a foiled kidnapping plot, says the threats against her and other officials haven’t stopped.

“There is ongoing rhetoric. Even the president last night in his tweet storm won’t stop attacking me, and I think that it’s creating a very dangerous situation — not just for me but for people in leadership roles who are trying to save lives all across this country,” Whitmer told ABC News chief anchor George Stephanopoulos during an interview Friday on “Good Morning America.”

“Bigotry and prejudice and violence is not acceptable,” she added.

The U.S. Department of Justice announced charges on Thursday against six men in Michigan allegedly involved in a monthslong plot to kidnap the Democratic governor and violently overthrow the state’s government before the November presidential election. During a press conference that afternoon, a visibly angry Whitmer lashed out at President Donald Trump for “stoking” hate and called the suspects “sick and depraved men.”

“Since he first called me ‘that woman from Michigan,’ we saw an increase in hateful language,” Whitmer said of Trump during Friday’s interview on “GMA.”

The Michigan governor accused the president and his administration of being “complicit” in the threats she and others are facing by giving encouragement and “safe harbor” to domestic terrorists.

“Each time he has tweeted about me, each time that he has said ‘liberate Michigan’ and said I should negotiate with the very people who are arrested because they’re ‘good people,’ that incites more domestic terror,” she said. “And I am not the only governor going through this. Certainly it’s been worse for me than most, but it is not unique to me, it is not even unique to Democrats. This White House has a duty to call it out and they won’t do it; in fact, they encourage it.”

Throughout the coronavirus pandemic, the Michigan State Capitol has been the scene of numerous protests by right-wing activists, some armed and calling for Whitmer’s resignation due to the lockdown order she imposed. Investigators said several of the suspects were among those protesting the state’s lockdown.

Trump took to Twitter Thursday night, saying Whitmer has “done a terrible job” and, regarding the foiled kidnapping plot, “rather than say thank you, she calls me a White Supremacist.”

“He clearly didn’t pay attention to what I said yesterday. I started with acknowledging the incredible work of the FBI and our state police,” Whitmer said on “GMA.” “This was an unprecedented operation and they worked and put themselves on the line to keep me and my family safe, and we are incredibly grateful.”

“A decent human being would pick up the phone and say, ‘Are you ok? How’s your family doing?'” she continued. “That’s what Joe Biden did. And I think it tells you everything you need to know about he character of the two people that are vying to lead our country for the next four years.”

The FBI said it first learned of the suspects’ plot early this year and began embedding confidential sources and undercover agents to monitor their activities.

According to a criminal complaint filed Tuesday, Adam Fox, Barry Croft, Ty Garbin, Kaleb Franks, Daniel Harris and Brandon Caserta started planning to take Whitmer and others hostage at the Michigan State Capitol in Lansing. They even planned to blow up a bridge and allegedly intended to hold Whitmer for a trial and then execute her. The men went to the governor’s vacation home on two separate occasions in August and September to conduct surveillance, the complaint said.

During a press conference Thursday, Andrew Birge, the U.S. Attorney for the Western District of Michigan, said that the individuals were arrested Wednesday. Fox, Garbin, Franks, Harris, and Caserta are all residents of Michigan, while Croft is a resident of Delaware, according to the complaint.

“The individuals in (state) custody are suspected to have attempted to identify the home addresses of law enforcement officers in order to target them, made threats of violence intended to instigate a civil war, and engaged in planning and training for an operation to attack the capitol building of Michigan and to kidnap government officials, including the governor of Michigan,” Nessel said.

Whitmer said the alleged plot was first brought to her attention “a number of weeks ago” when her security detail briefed her on it.

“This was a very serious thought-out plot to kill police officers, to bomb our capitol, killing Democrats and Republicans alike, and to kidnap and ultimately put me on trial and kill me as well,” the governor said on “GMA.” “These are the types of things you hear from groups like ISIS. This is not a militia; it is a domestic terror organization. We need to call it out and people of goodwill on both sides of the aisle need to stand up and do the right thing here, because this should not stand in the United States of America in 2020.”

The Supreme Court deal is done