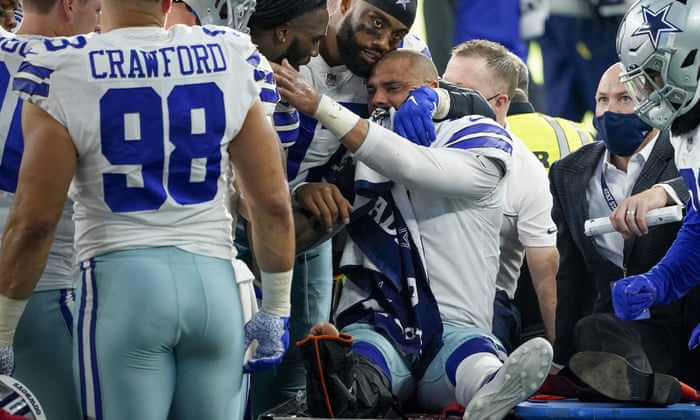 The Dallas Cowboys won their game on Sunday, but they lost a whole lot more. With six minutes left in the third quarter, quarterback Dak Prescott suffered a devastating ankle injury. It was a brutal blow for the Cowboys, who will have to find a way to continue without their most important player and another reminder, as if we needed one, of the risks involved in playing in the NFL.

After the game, a 37-34 win, the team announced that Prescott had suffered a compound fracture and a dislocated right ankle. It’s too early to expect a timetable for his return, but it’s hard to imagine Prescott returning this season. This is no small thing since Prescott came into this campaign playing under the one-year franchise tag. He was set to sign a huge deal with the Cowboys (or another team) at the end of the season. That contract – and his future with Dallas – is less clear now that teams may well have doubts over his fitness. Meanwhile, the Cowboys will turn to veteran quarterback Andy Dalton, who they brought in for exactly this type of scenario. Dalton is one of the more overqualified backup quarterbacks in the league, but he’s still a step down from Prescott, who had been leading the league in total passing yards this season.

Putting football aside, it’s hard not to feel for Prescott as a person. Earlier this year he made headlines after opening up about his struggles with depression. Beyond that, he has talked about coming to terms with the deaths of both his mother, who passed away from colon cancer in 2013, and his brother, who took his own life earlier this year. In sports, there’s a tendency from some to treat mental illness as a weakness and Prescott’s honesty about his own struggles was both refreshing and brave. The affection for him among his peers was clear as players from both the Giants and Cowboys knelt in shock as Prescott was carted off the field.

The timing feels particularly brutal. Before the Prescott injury, the biggest story in the NFL on Sunday involved the return of Washington’s veteran quarterback Alex Smith. Smith suffered a horrific leg injury in 2018, an injury that led to life-threatening complications and was seen as a potential career-ender. When he replaced Kyle Allen at quarterback, it was his first NFL action in two years.

Commentator Joe Theismann, whose name is synonymous with gruesome sports injuries thanks to the career-ending compound fracture he suffered on Monday Night Football in 1985, spoke for many NFL fans when discussing Smith’s comeback: “It’s just spectacular to see him back on a football field. I’m so thrilled and excited for him.”

It’s hard not to be impressed by Smith not just overcoming a devastating injury (and 17 surgeries) but actually reaching a point where he could play in the NFL again. That being said, watching Smith’s return to action against the Los Angeles Rams was not a wholly joyful experience. Shortly after entering the game, Smith was sacked by Rams defensive tackle Aaron Donald. Smith wasn’t hurt on the play, but it was difficult to witness, given everything he has gone through.

The Rams beat Washington 30-10, but that was almost beside the point. Smith’s return was one of those feelgood moments that we all love to share, a positive story during a year in which they are in short supply. So, of course, it couldn’t last. A few hours later, a tearful Prescott was being carted off the field with his future in doubt. While we all love a good comeback story in the NFL, it’s hard not to wish that there didn’t have to be so many of them.

Two. That’s the number of times the New York Jets punted in a fourth-and-one situation, and both of these instances came in the first five minutes of their game against the Arizona Cardinals. If you’re wondering when the last time something that happened, well that would be never (or, at least, not since 1994 when they started keeping track of such things). You have to give head coach Adam Gase credit for finding entirely new ways for the Jets to give up before they have even started. The Cardinals, as you probably guessed, went on to win 30-10 while the Jets are now 0-5 on the season. 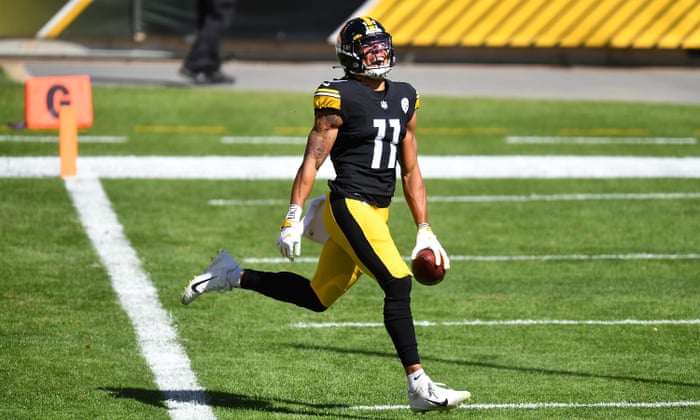 It wasn’t just that Pittsburgh Steelers wide receiver Chase Claypool scored four touchdowns during the team’s 38-29 win over the Philadelphia Eagles, it was the way he did it. Claypool had three receiving touchdowns and one rushing touchdown, a feat that no other rookie has ever accomplished. The Steelers are now 4-0 to start the season, good enough for their best start since 1979.

Here’s the good news, Los Angeles Rams quarterback Jared Goff: you just scored a touchdown and your team is cruising towards what will eventually be a 30-10 win over Washington. The bad news? Well, you botched the “spiking the football” celebration so badly it’s the thing that people will remember.

“I’ve taken a lot of sad walks up that ramp, but not today. I’m going to enjoy this one.” – Las Vegas Raiders quarterback Derek Carr on his team’s 40-32 win over the Kansas City Chiefs in Arrowhead Stadium

It turns out that the Chiefs are mortal after all. In the first half it looked like the Chiefs had the game well in hand, as the Super Bowl champions led the Raiders by double-digits at one point during the second quarter. However, it felt like an entirely different Chiefs team took the field after halftime. Kansas City didn’t score in the second half until there were four minutes left. By that point, the Raiders were comfortably ahead. The Raiders ended up handing the Chiefs their first loss since last November. Carr had possibly his best game as a professional, throwing for 347 yards and three touchdowns. 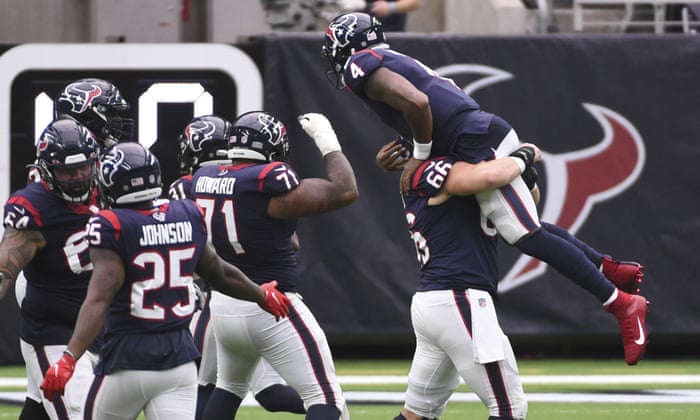