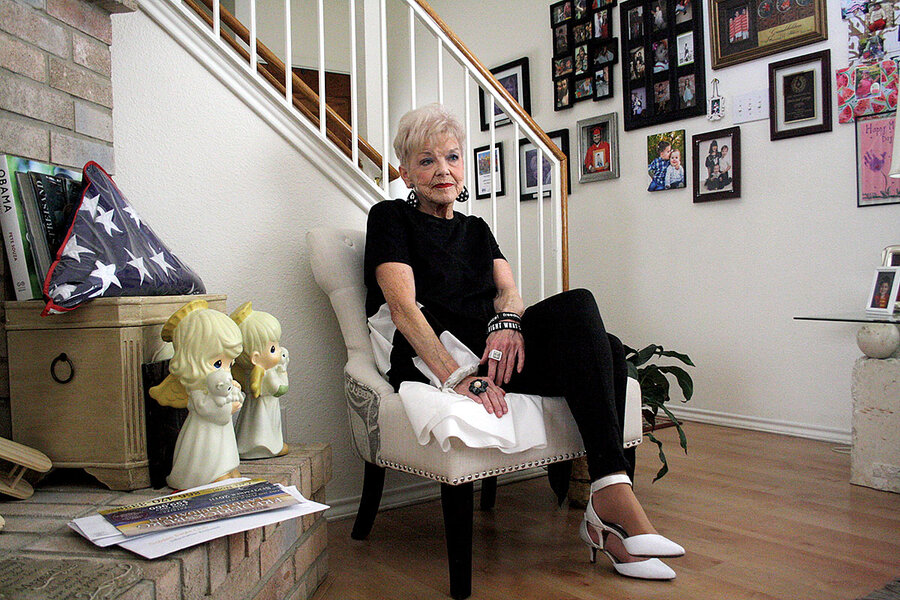 To talk the talk is one thing, the saying goes. But to walk the walk, the way senior citizen advocate Doris Griffin does, in her trademark high heels – for 75 years – is another thing, entirely.

The click of her heels down the hallways of government offices and senior centers is the sound of the upbeat energy that the
octogenarian is known for in her work. And that work for the past three decades, say those who know her, has been important: Much of the support services for older adults in the San Antonio area exists because of her.

“I know what it is to feel isolated and lonely, and that’s what they feel all the time,” says Ms. Griffin. “I found that out during this period.”

“You can get real used to sitting around … and just not doing anything,” she adds. “And then you have no reason to get up, and you have nothing to look forward to.”

For Ms. Griffin, who bears a slight resemblance to her idol, the peppy, all-American singer-actor of the 1950s and ’60s, Doris Day, the “look” is what gets her out of bed each day: Putting herself together with those heels and perfect clothes and makeup, she says, “is just for me.”

At a Monitor interview on a mid-September afternoon in the north San Antonio home she shares with her daughter and sister, she was dressed sleekly in a black blouse and pants with the heels she’s been sporting since the age of 15.

She has been a live wire since childhood. There were only 15 other houses in Gobblers Knob, the rural Ohio hamlet she grew up in during the Great Depression. But there were lots of children and room to run around.

“We had a creek down here and we had a forest back here. Man, we were just turned loose,” she recalls.

She likes to sing too, and singing was her first love. As a teenager she worked at WLWT, the same Cincinnati radio station where the other Doris began her rise to Hollywood stardom. Ms. Griffin performed with a band on the radio and onstage under the name Dixie West, and recorded one record – a record that thankfully, she says, has been lost to the mists of time.

She liked to have fun, but she says it was her parents who taught her that helping others is more enriching than money or fame.

Her father, who worked as a maintenance supervisor at General Electric, “never asked his [team] to do anything he wouldn’t do,” she says. “I really learned a lesson from that.”

She didn’t become a star like Doris Day, but before she turned 20 she left Ohio, becoming the globe-trotting wife of a U.S. airman. She joined her husband on postings in the Azores, Germany, the United Kingdom, Libya, and Alaska. Whenever they returned to the United States, Hawaii was always their first choice of posting.

But instead of white sands and Pacific Ocean breezes, they almost always got the urban sprawl of San Antonio and the now-closed Kelly Air Force Base. After her husband retired from the military in the late 1960s she spent over a decade working for local churches.

Just when Ms. Griffin was planning to take some time off, Jefferson Outreach – a nonprofit that helps older adults in the San Antonio area stay active and feel less isolated – asked her to become its executive director.

“Everything we did was so that seniors could be independent in their own homes,” she says.

In 2000, she joined the Texas Silver-Haired Legislature, a lobbying group for Texas seniors at the state level.

“[Ms. Griffin] pulls her own weight, plus others’,” says Pat Porter, who joined the group that same year. “She’s always worked really hard on [issues like] delivering meals, congregant meals, and housing.”

And in the underfunded arena of senior services, her lobbying efforts have been especially needed.

“The numbers are so small they’re almost a rounding error when you talk about the dollars spent,” says Ms. Zernial.  “What Doris is doing, talking to people at the state level, [is] so that we at least get that.”

In 2002 Ms. Griffin joined a joint city-county commission on elderly affairs, and the commission soon recommended the creation of centers where older adults could meet for meals, access services, and join activities and exercises.

At first the commission wanted four – one in each quadrant of the city. Now there are 10, and one of them is named after Ms. Griffin.

“She literally helped change the thinking of senior services in Bexar County,” says Ms. Zernial. “She’s a fierce advocate for older persons. … It’s a way of life for her.”

Together they’re working to encourage older adults to take care of their regular health and chronic conditions. With one initiative they’ve distributed tablets – nicknamed GrandPads – to some people so they can meet virtually with their doctors. They’re also putting on events and television programs aimed at keeping older adults engaged and active.

Like most of the country, Ms. Griffin has been getting a crash course in videoconferencing this year. She’s seeing the benefits, however, such as virtual bingo games and exercise sessions. And she’s helping promote them.

There are already 20 exercise classes set up over Zoom, she explains, miming the exercises in her chair, her heels clacking against the floor with each move.

“You have to be innovative and try to figure out … what can I do?” she says. “You either find something, or you’re just lonely and sad, and end up being lonelier and sadder.”

As she approaches her ninth decade, she says she recognizes that she may not have many more years of advocacy left in her. Next year will be her ninth term in the Texas
Silver-Haired Legislature. Walking up and down the halls – and, more importantly, the stairs – of the state Capitol is increasingly challenging, especially in heels.

But, she jokes, the heels are what people will remember her for.

“When we think of the heels we’re also going to think about what she has meant to this community,” says Ms. Zernial.

And for now, Ms. Griffin continues to build her legacy, guided by her parents’ altruistic philosophy: “What do you do with your life? Is it money and fame? What is it? Why are you here? And I think you’re here to serve others,” she says.

“If you can help in any way, that’s what we’re here for.”