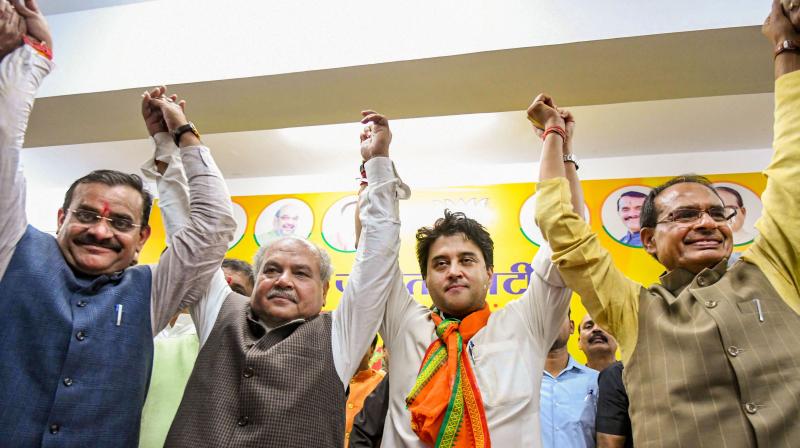 Bhopal: The Congress has moved the Madhya Pradesh high court seeking recovery of expenses incurred by the Election Commission (EC) to conduct polls in the 25 Assembly constituencies from the MLAs who resigned from the party in March and July this year and are now seeking re-elections as BJP candidates from their respective seats in the November 3 Assembly by-polls in the state.

Senior Congress leader Yogesh Guddu Chouhan filed a writ petition in the Jabalpur high court seeking a directive to the EC to recover the poll expenses incurred to hold elections in these particular Assembly seats in 2018 from the 25 former MLAs who represented the constituencies in the polls then.

“My petition has been admitted by the high court,” Chouhan told this newspaper on Thursday. He had filed the petition last week. “I have not heard of any such case in Indian judiciary so far. EC only conducts polls and has no power to recover money,” senior advocate of Jabalpur high court, Pankaj Dubey, told this newspaper.

The petition contends that the 25 former MLAs resigned from the Assembly citing personal reasons and were now seeking re-elections from those very seats, but as candidates of another party.

Sources in the chief electoral officer’s office here said the EC has not fixed any limit on expenditure for holding elections in Assembly constituencies and the expenditure for conducting polls vary from one constituency to another.
It costs nearly Rs 1 crore to conduct polls in an Assembly seat, a senior officer in CEO said, requesting not to be quoted.

“I filed the petition with the hope that the ‘defectors’ will be censured by the court so that such incidents do not recur in any state in the country in future”, Chouhan said.

Three other Assembly seats are going to by-polls on November 3 owing to the death of sitting MLAs.

Of the 25 former MLAs, 18 were loyalists of veteran leader Jyotiraditya Scindia who snapped his two-decade-long ties with Congress in March this year following differences with Mr Nath and joined the BJP.

Sixteen of the 28 Assembly constituencies that are going to by-elections on November 3 fall in Gwalior-Chambal region, considered Scindia’s stronghold.

Scindia had ensured victory of 27 out of 34 Assembly seats in the region in the 2018 polls, helping Congress return to power in MP after a gap of 15 years.

Scindia, who was an aspirant for chief minister’s post, however felt let down by the Congress leadership when Nath was made the chief minister. He was also upset that he was not made president of Pradesh Congress Committee (PCC) in MP.