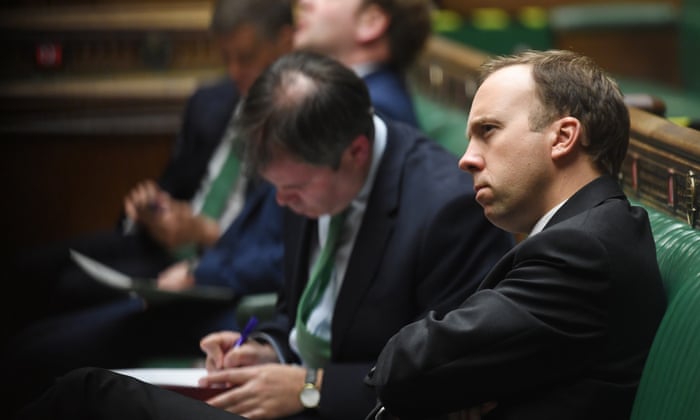 Conservative rebels fired a warning shot at the government as 42 MPs voted against stricter Covid-19 curbs, amid angry scenes in the Commons, where Matt Hancock criticised lockdown sceptics.

Tory rebels organised a symbolic vote against one of six restrictions approved by MPs on Tuesday night.

In total, 82 MPs including 23 Labour and 10 Lib Dems voted against the motion containing the 10pm hospitality curfew as well as other restrictions on public spaces and fines. The motion passed 299-82, with Labour formally abstaining.

Chris Green MP, a junior frontbencher, resigned from the government on Tuesday night ahead of the vote in protest at the restrictions in his Bolton constituency. “I believe that the cure is worse than the disease,” he wrote in his resignation letter. “I believe there are better alternatives to the government’s approach.”

Other rebels included the former cabinet minister David Davis, former minister Steve Baker, Graham Brady, the chair of the 1922 Committee of Tory backbenchers, and a number of 2019 new intake MPs from the so-called red wall of northern seats including Dehenna Davison and Imran Ahmad Khan.

The number of Conservative MPs prepared to vote against harsher national restrictions is likely to worry Downing Street, as a signal that rebels have the numbers to defeat the government’s 80-seat majority as long as Labour sides with them, something Keir Starmer has so far resisted.

Many Conservative MPs have called for less stringent measures, fearing the economic impact of mass closures of pubs and restaurants.

Some have promoted the US-based Great Barrington declaration, authored by doctors and scientists who oppose current lockdown measures, including Sunetra Gupta of the University of Oxford.

That prompted a furious response from the health secretary as he addressed MPs before the vote, saying he fundamentally disagreed with its premise of granting young people unfettered freedoms while advising older and vulnerable people to shield.

“The Great Barrington declaration is underpinned by two central plains, and both are emphatically false. First, it says that if enough people get Covid, we will reach herd immunity. This is not true,” he said.

“It’s neither conscionable nor practicable, not when so many people live in intergenerational homes where older people need carers … and when young people can suffer the debilitating impact of long Covid.

Steve Baker, one of the key critics of the government’s lockdown strategy, said the Great Barrington declaration was “well motivated” and said keeping lockdown measures in place until a vaccine is available would “cause irreparable damage with the underprivileged disproportionately harmed”.

Baker said he had also been examining critiques of the proposal but said the government “must find an alternative strategic plan, between the Great Barrington declaration and where we are today”.

In another warning to the rebels, Hancock said that the three-tier system for local restrictions in England, announced on Monday, could go further than the measures in the most severe tier 3.

“We do not rule out further restrictions in the hospitality, leisure, entertainment or personal care sectors. But retail, schools and universities will remain open,” he said.

Hancock also mounted a strong defence of the test and trace system, hours after a damning assessment of NHS test and trace by the government’s scientific advisers (Sage) was released.

The experts warned that “low levels of engagement” with the system, coupled with testing delays and likely poor rates of self-isolation suggested “this system is having a marginal impact on transmission at the moment”.

The health secretary insisted the system was significantly bigger than in most other countries. “When I talk to my international colleagues, they asked the question: how did you manage to build this capacity, so fast?, and that is the truth of it,” he said.

Hancock also defended the curfew, which he said was having a significant effect on tackling the pandemic. “We’ve seen a reduction in alcohol-related admissions late at night … as a measure of how much people are drinking late at night, and therefore it is evidence that there is less mixing late at night,” he said.