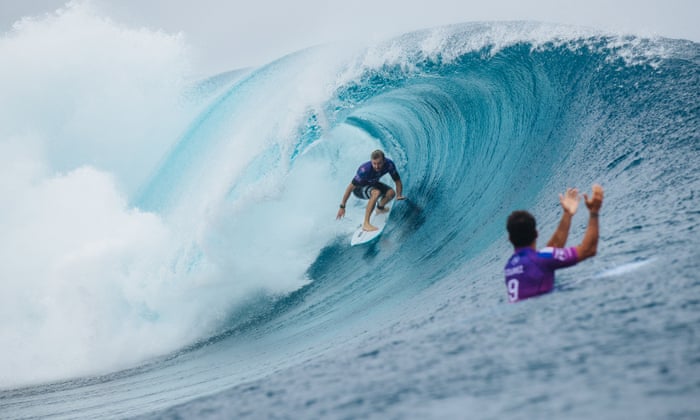 Adrian Buchan gently closes the door to dim the hubbub from his pre-school-aged kids. As one of the longest-serving competitors on the WSL’s championship tour, behind only Kelly Slater, he had wanted 2020 to be a world title year. But the pandemic has limited him to school runs and staying in one place for more than a fortnight at a time.

“I think life isn’t that different, it’s just that I’m not going away every couple of weeks with my coach and competing in Bali or Brazil or South Africa,” he says.

“My eldest daughter started school this year and I guess in a way it was kind of fortuitous for us to have a year at home and be a little bit more grounded. Career-wise for me, I guess if this had happened when I was a little bit younger, it probably would have affected me more.”

This is a hallmark of the Australian known as “Ace” to surfing fans worldwide: imperturbable, centred, thoroughly nice – not what might be considered traditional surf star material. But, even at 37 years old, he is also regarded as one of the most technically excellent surfers in the world, one who has performed consistently well on the Championship Tour since his rookie year in 2006.

In Buchan, a naturally disciplined and clean image has combined powerfully with a strong sense of social justice, leading him to admire the athlete activist in figures such as LeBron James, Adam Goodes and David Pocock. He recently won an award from the World Surf League for his ocean advocacy, donating the $25,000 prize money to the Climate Council. 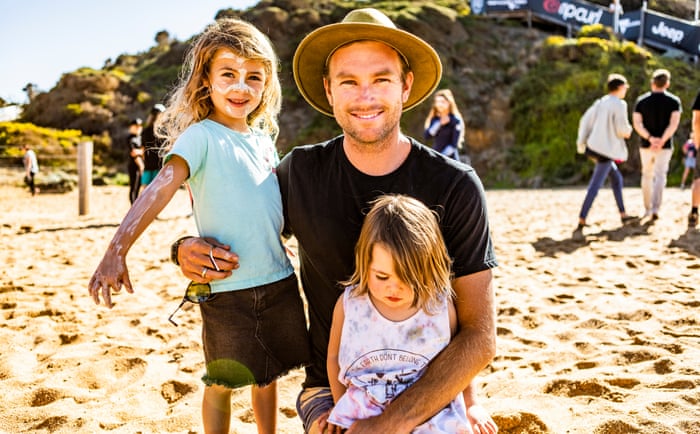 Accepting the inaugural award, he said: “I feel a great sense of responsibility, even urgency, to use my platform beyond the jersey to try and inspire positive change. Proud to be part of a broader group of athletes across many sports and spanning the globe who have jumped off the fence and are standing up for the things we believe in.”

This social conscience he believes came from his parents, who lived through the worst of South Africa’s apartheid era before migrating to Australia. His father was a school teacher during the Soweto uprising of 1976, when police attacked thousands of students, killing many. “They were seeing a lot of injustice,” he says. “They were thinking about starting a family. Luckily they were accepted to move to Australia and started a new life here.”

‘The science is super clear’

Foremost on Buchan’s conscience right now is Australia’s “gas-led recovery”, a vision that pins the country’s post-Covid revival on the expanded use of the fossil fuels.

“The interest of fossil fuel in Australian politics is becoming something of an international joke,” he says. “It’s fine for us to kind of sit back and shake our heads at what’s happening with, say, Donald Trump in America, but people are doing the same [here] … the influence of fossil fuel in our politics, it’s just crazy. You have a government in power that is picking and choosing when it listens to the science. 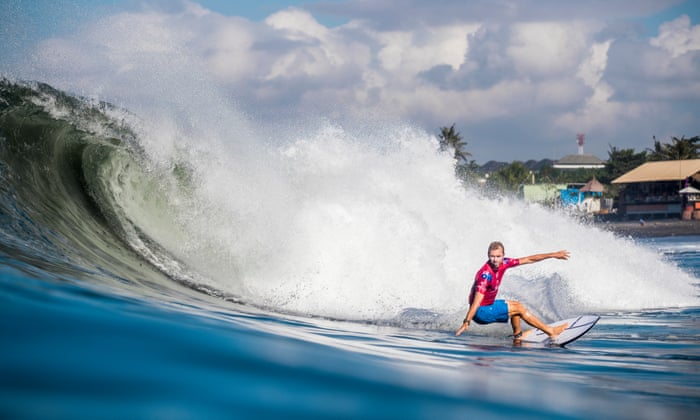 “Renewable energy prices are low – there’s non-fossil fuel energy storage options available. Gas just isn’t a transition fuel that’s going to lead to a safe climate. I feel like that ship’s well and truly sailed … I think switching to renewables rapidly is the only responsible path. The science is super clear.”

Closer to home, Buchan has lent his voice to oppose renewed plans to drill for oil and gas in the Pep 11 region that stretches from the waters off Sydney in the south to the central coast and Hunter region in the north.

“I think there’s going to be a lot of community action in the coming months if things heat up with Pep 11 because we certainly don’t want to see gas rigs off our coast, and that’s a real possibility.”

Pre-Covid, Buchan visited an area at the heart of the climate debate, spending a week in Tasmania’s Tarkine wilderness, which includes precious yet largely unprotected rainforest, with Greens senator Peter Whish-Wilson to make a two-part documentary for WSL Pure, the philanthropic arm of the surf league.

“That was hugely eye-opening for me to go and spend that time and do that, and also just to be able to get your hands dirty and be on the frontline,” he says. “I think you can make much more of a difference.” 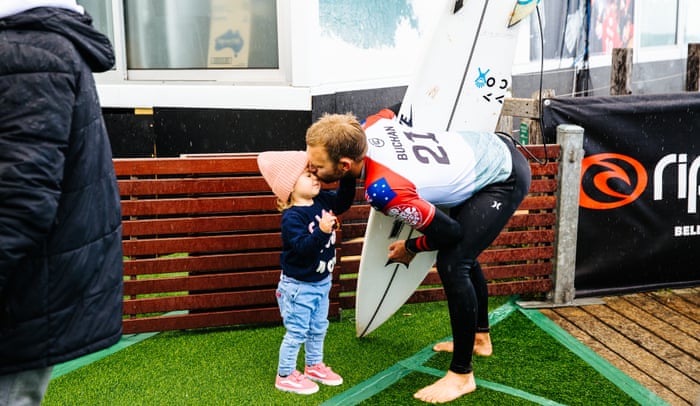 By partnering with local organisations wherever the pro tour takes him, whether it is urging action on fossil fuels, single-use plastics or encouraging people to “take three for the sea”, Buchan is able to use his profile to boost a huge range of causes.

But does his advocacy pose any risks? Buchan is aware not everyone shares his views on the tour. “Obviously as an athlete you tread a fine line,” he says. “You may alienate some people who disagree with you but I think for those that do [agree], you really strengthen that bond.”

‘I didn’t have all this spare time to go surf’

Buchan was born in Gosford, on the central coast of New South Wales. His parents – a Rhodesian-born father and South African mother – settled in nearby Avoca Beach, a small surf town that raised young star Macy Callaghan and whose boardriders club now boasts outsized representation on the world tour, with the likes of Buchan, Wade Carmichael and Matt Wilkinson, as well as surf coach to the stars, Glenn “Micro” Hall.

Enjoying what he calls a “balanced” upbringing, Buchan caught the surf bug aged four or five, despite being educated inland at Barker College in Hornsby, the private school where his father – himself a surfer – taught.

“It was about an hour door to door. It taught me a lot of discipline really – I didn’t have all this spare time on my hands to go surf before or after school. The small amount of time I had, I had to be really efficient with. I was famous for running down to the surf at 5.10pm in winter to get that last half an hour before it got dark. In some senses that was my little [competition] heat really.”

It appears little has changed since, in a good way. He still runs to check the surf and still racks up thousands of hours of practice, to which he ascribes his lengthy spell on the pro tour.

During Buchan’s lifetime, competitive surfing has arguably gone from a fringe creed featuring more than a few mavericks and misfits to a more mainstream, accessible one. Stars’ Instagram feeds are now as likely to feature videos of them playing with their kids as the latest barrel riding in Tahiti. Buchan, a father of three under seven, is no exception.

“I think it’s just the sport probably becoming more professional,” he says. “In my time, I’ve been lucky enough to experience a bunch of different generations. Occy [1999 world champion Mark Occhilupo] was still on tour when I first started, Kelly [Slater] has been there the whole time and he’s been a great role model in terms of his professionalism.”

Is there still room for the rebel? Buchan laughs. “I think people are just kind of free to be themselves now – whether that’s travelling with a family and doing it that way. You can certainly still be the good-times single young guy – it’s not to say that it’s full of stiffs.” 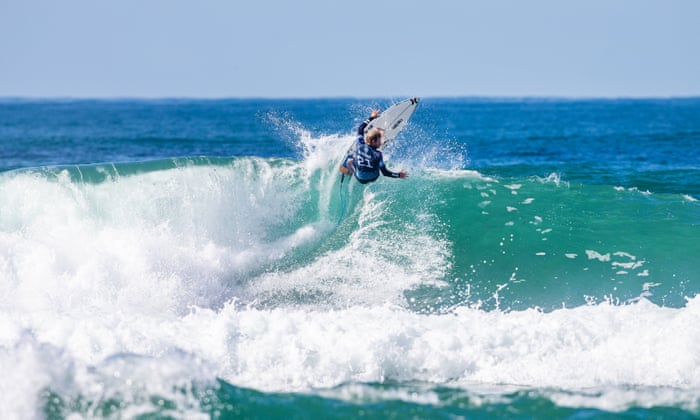 “It’s one of the few sports when the event finishes, or the year’s over, and you look at each other and think about where you’re going to surf that afternoon.”

That’s not to say there isn’t rivalry, and Buchan still remembers keenly his victories over Kelly Slater, posters of whom adorned his walls as a child. “I was lucky enough to put together two really great performances. He’s an incredibly tough guy to come up against. You win an event you wanna say you did it against him.”

Given his parents’ South African roots at a time of great racial upheaval, Indigenous culture has always been a strong interest for Buchan. Aged 11, he wrote a children’s book, Macka’s Barrel into the Dreamtime, about two boys – one white, one Indigenous – who meet on walkabout and discover surfing as well as the natural environment and its fragility.

Years later, it is now in print but the progress Australia has made in addressing the wrongs of its colonial past – compared with other places he visits such as Tahiti, New Zealand and Hawaii – pains him. He says: “It’s a bit of an open wound and I feel like the only way for it to change is for more and more people to speak up about it, for the younger generation to move away from apathy on issues like this. And it starts with education at a young age.

“What a shame that we don’t teach our kids more about that, that it’s not celebrated, that it’s not part of our national anthem. It’s not an everyday part of life here. I think as a country we’ve got a great deal of growing to do on that front. I like to think one day we could have a country where that’s something that is really celebrated.”

The need to advocate about the climate crisis, the pressure to compete at the highest level, and the responsibilities of being a father are all intertwined for Buchan. The ocean is at once his battleground, his inspiration to do more and his personal healing salve.

“[Because of Covid] I think people are really realising the positive impacts of being in and around the ocean. I certainly know that, doing it myself and seeing the positive impact it’s had on my life … I feel a great deal of responsibility to give back not just to the sport but to the ocean itself. Without a healthy ocean there’s not a healthy Earth, there’s not a healthy us. I think that’s something I really want to try to pass on to my kids.”