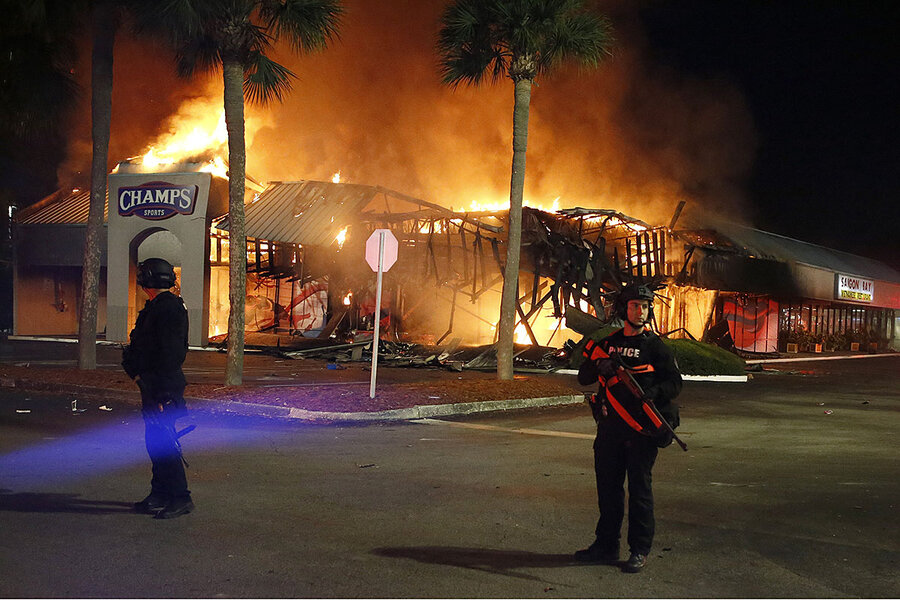 Violent protest: The data and perceptions

The Freedom Forum Institute, a First Amendment advocacy group, has tracked at least 40 pieces of legislation aimed at curbing unruly and violent protest. Lawmakers in eight states have attempted to waive civil liability for drivers who drive their vehicles into crowds, claiming self-defense.

Statistics from the Armed Conflict Location & Event Data Project offer insight into the prevalence of violent protests. Between May 26 and Aug. 22, some 2,400 locations in the United States reported peaceful protests; fewer than 220 reported “violent demonstrations,” which include acts targeting people, property, businesses, and “other rioting groups or armed actors,” according to the group.

Yet a significant minority of Americans are worried about violence associated with the protests. Some 42% of respondents to a September Morning Consult poll say most protesters associated with the Black Lives Matter movement are trying to incite violence or destroy property.

To the Freedom Forum Institute, protests are by definition disruptive.

“We have a society designed for change, and that doesn’t happen easily, and sometimes it’s messy,” says Gene Policinski, chief operating officer of the institute in Washington. “But the net result is that the founders had confidence that, if we would talk to each other without the government restraining us, we would arrive at the best possible solution for the greatest number of people. We tamper with that process at our peril.”

Last month, Florida Gov. Ron DeSantis took the boldest step yet to curb “disorderly and violent protest.” He announced a bill that would increase penalties for protest violence and property destruction, waive bail for those arrested, enable authorities to charge organizers with racketeering, and waive liability for drivers who claim self-defense when they drive into protests. The bill builds on efforts since 2017 to limit liability for drivers after protesters began blocking interstates.

But even raising the possibility of racketeering charges for organizers should a protest get out of control will almost certainly chill speech, says Mr. Policinski of the Freedom Forum. Such laws, he and others note, could have suppressed much of the civil rights movement, which often involved protests on roads, sidewalks, and bridges.

“Who will organize a rally where there’s potential that you could lose your liberty and everything you own” if someone who attends breaks the law? asks Mr. Policinski.

Moreover, the messaging that it’s OK to hit protesters blocking a road if you feel afraid could be “understood by lots of people as encouragement” to commit violence, says David Alan Sklansky, author of “Democracy and the Police.”

“We don’t have a problem in this country of people getting injured because they are too unwilling to drive out of a crowd of protesters,” says Mr. Sklansky, a professor at Stanford Law School. “The problem that we do have is … incitement of violence against people on opposite sides of political divides. This law is not helpful in that regard.”

A researcher at the University of Chicago has found 104 instances this summer in which cars were used to ram into or move protesters in roadways, according to a report in USA Today. At least 43 of those were found to be malicious, and a total of 39 drivers have been charged.

So far, only a few anti-protest bills have been signed into law, and all are far more modest than the Florida bill. But they come as the country has seen a shift away from support for the protests, according to a new Associated Press-NORC Center for Public Affairs Research poll. In June, 54% of Americans approved of the protests. That dropped to 39% by September. White Americans and Republicans spearheaded the shift.

In some cases, measures to rein in protesters have faced a backlash. In Whitefish, complaints about protesters blocking sidewalks led to an ordinance that would increase permitting requirements and limit the use of bullhorns. The ordinance did not fare well in a public hearing.

“Protesting is as American as apple pie,” says Ben Davis, a city councilor who joined the rest of the council in voting down the ordinance. “Yes, there’s a line where your right to free speech infringes on other people’s rights, and that’s the boundary that the government has to make sure is respected. But the government as a whole needs to have a certain amount of deference” toward protesters.

Most communities have acted with that deference, says Mr. Paulson, a former editor-in-chief of USA Today who now directs the Free Speech Center in Murfreesboro. “In the overwhelming majority of America’s communities, the local government has been restrained and thoughtful in their actions,” he says. “Those who want to paint protesters as violent and evil looters … undermine what is actually working pretty well across America.”

Courts, too, are wrestling with implications.

In Mckesson v. Doe, the 5th U.S. Circuit Court of Appeals reversed a lower court ruling, leaving Black Lives Matter organizer DeRay Mckesson open to liability for the injuries of an officer hit by a rock during a protest. The case is now at the Supreme Court.

In Tennessee, Mr. Capretto was asked to testify to a state House committee about a driver protection bill in 2017. The bill died in committee. “It’s like they realized, ‘Dear God, if we pass this, the implications of this are horrifying in a way that we could not rein in,’” he says.

Months later, a car plowed into a group of protesters in Charlottesville, Virginia, killing a woman named Heather Heyer and injuring others. “I thought they were attacking me,” the driver, James Alex Fields Jr., told police. Mr. Fields was sentenced to life in prison plus 419 years.

From Mr. Capretto’s vantage point, “the big sort of very transformative component of this for me was understanding on a far more visceral level how true the claims have been from Black and brown and Indigenous Americans for centuries: that white Americans are not there to protect them.”

He adds, “More and more of these bills have been turning up nationally, and they’re getting more open and aggressive in their language.”

What happens to classroom rules when school is at home?