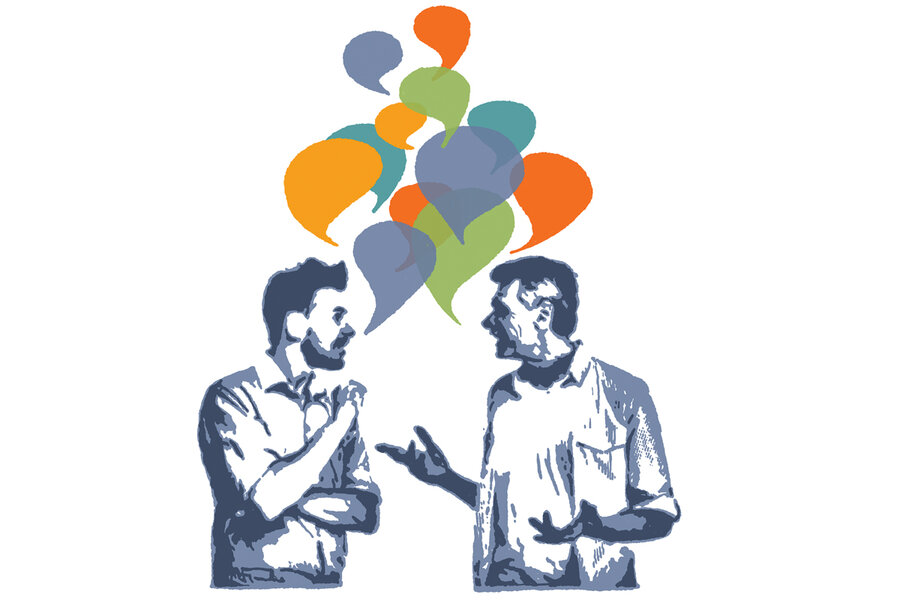 My dad was a great talker. For a man who spent 30 years in personnel and labor relations, the most important thing to him was communication. It was a skill, an art form, a vocation, and a passion; it was the essence of his lively and loquacious spirit. Communication was his credo. “As long as we’re talking …” he’d say. Everything would be OK, as long as we’re talking. It’s particularly important advice to heed in these times, when people seem more likely to shout.

After years in labor negotiations, Dad had many stories and insights about the art of talking. For example, he knew that contracts were rarely decided in rooms where pounding tables and shouting were the preferred techniques. The ultimate agreement was likely to be confirmed later, across the street from the plant at a tavern, where calm prevailed.

I remember theorizing with Dad that if all the members of Congress lived in the same neighborhood and walked together each morning discussing, debating, and arguing the issues, we’d have a more perfect union. Even if they didn’t change their minds, they’d still like each other a lot more and perhaps even understand the other side.

My dad and his lifelong friend Tom spent years walking our subdivision, arguing over every issue they could find. They’d often wake the neighborhood, a conservative Roman Catholic Republican sparring with a liberal Protestant Democrat. They didn’t resolve much, but each was better off, for the walk and the talk. Good things can happen as long as we’re talking. We hear too often how both sides are “done talking” because no progress has been made. My dad and Tom would say they weren’t even close to done and hadn’t talked nearly enough.

Dad was always talking, even to himself. I remember riding in the car with him and watching him “talk things through,” his hands framing ideas subtly on the steering wheel, and his lips moving ever so slightly as he formulated ideas into words. In fact, it was his gift of gab that scored him his career.

He was fond of telling the story of walking across campus at Southern Illinois University when he saw Owens-Illinois was interviewing job candidates, and an old buddy was the rep. Dad, being a gregarious sort, always bopping in and out of everyone’s day, stopped to chat. After a while, shooting the breeze and chewing the fat, his friend asked him, “So, you want a job?”

Doing what? Dad asked. “I don’t know anything about glass manufacturing.”

That’s OK, came the reply. “You’ll figure it out.” Dad had talked his way into a job, and kept talking his way forward in a successful career.

My father and I had some rules for talking when I was a petulant teenager. For example, we would never go to bed angry. It didn’t matter how late it was, with me at the bottom of the stairs and Dad sitting at his desk. And it always ended with a hug, no matter how heated the talking had been. We learned a lot by talking and perhaps just as much when we didn’t. When I’d moved away, for instance, we discovered that email is a terrible way to talk things out. Even the phone can be tough, for there’s no hug or smile at the end. Talking was also conflict resolution, an essential part of Dad’s parenting style. To be honest, his insistence on talking it out was kind of a pain when I was a kid and had done something wrong: Can’t you just ground me and get it over with? No. It was never just a punishment – it was a learning opportunity.

Dad and I had long, deep, and occasionally contentious discussions as we sought to make sense of the world. When Mom would remark on the intensity of our debates, Dad would play down the seriousness of our tone.

“Michael and I are just solving the problems of the world and figuring out the mysteries of the universe,” he’d say.

Dad’s lesson is one that all of us can use. Talk. Really talk to each other. And keep talking. My colleagues might cringe at that proposal, knowing I always have something to say. And it’s been my professional goal lately to do more listening. But I do know that, as long as we’re talking, there’s hope.

I’ve thought of Dad’s words often in my job as an educator, especially in working on issues of equity, diversity, and race. My work has been informed by the ideas of Dr. Glenn Singleton, who for decades has encouraged having courageous conversations. In doing so, we must be willing to engage and be vulnerable. In doing the tough work of talking it out, we must also willingly accept and expect nonclosure. We won’t solve the problem in one setting. The conversation is ongoing and endless. At times it may seem fruitless, even hopeless. But it’s not … as long as we’re talking.