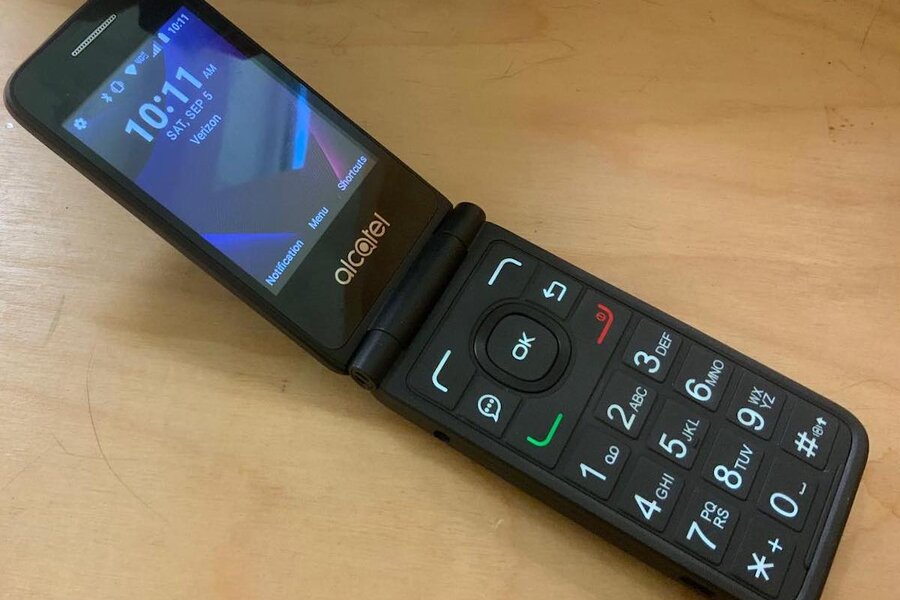 Eva: I’m not sure I dare check my own screen time. An hour actually sounds low to me. Did you try anything else to reclaim that time?

I’d tried other digital dieting strategies, like putting a rubber band around my phone, or setting the screen grayscale. But they just didn’t stick.

So, on Sept. 5, I removed the SIM card from my aging iPhone SE and stuck it in a dumb phone – “basic phone” is the preferred nomenclature – an Alcatel GO FLIP V.

Eva: How does your flip phone compare with the smartphone so far?

Eoin: It’s not nearly as slick as an iPhone, but it has a satisfying physicality to it. The buttons are real buttons. It feels natural to hold to the ear in precisely the way a glass-and-aluminum slab doesn’t. And I love being able to end my calls not with a feeble tap, but with a crisp and definitive snap.

In other words, it’s a phone. On my old iPhone, my phone was just an app on my phone. As the stand-up comic Gary Gulman remarked, calling a smartphone a phone is like calling a Lexus convertible a cup holder.

Eva: But what about all of the other functions of a smartphone? Having what is essentially a computer in your pocket has its benefits.

Eoin: I think that bundling gets to the heart of what the modern smartphone is about.

From the very beginning, the iPhone was a Swiss Army device. For me, it was my newsstand, my GPS, my camera, my pocket watch, my flashlight, my audio player, my external brain, my kitchen timer, my calculator, my video game console, my light switch, and my TV remote. And my phone.

This bundling achieves some amazing things. You can integrate geolocation, push notifications, and mobile payments to summon a personal driver. You can integrate a microphone, onboard processing, and internet connectivity to identify a song playing in a cafe. Having a smartphone is in some ways like having superpowers.

But it also subtracts from some of the original individual tools’ qualities. If you have a real screwdriver, you’re probably not going to use the one on your Swiss Army knife. The same goes for those little sproingy scissors and – especially – the plastic toothpick.

Eva: So how are you replacing all those other functions? And how is it different than having them all bundled?

Eoin: The past month has, for me, been a process of unbundling all of my iPhone’s functions. I started using an actual flashlight, we got a kitchen timer, and so on. As I go back to using the original tools, I’m reacquainting myself with a kind of tactility: Feeling the weight of an actual flashlight, tapping physical buttons, twisting the dial on the timer.

At least I don’t fall down a Wikipedia rabbit hole every time I pick up my flashlight anymore.

I’ve also rebundled some of my iPhone’s functions onto my iPad – which I used to use mainly for reading comics and FaceTiming. Now I also use it for things like email, news, and social media. But, because I’m not carrying my iPad around in my pocket all day, I’m a little more intentional about how I use it.

It feels a little bit like it did in the early 2000s. When we wanted to use the internet to look something up, we would say, “I’m going online.” We don’t really say that anymore because we’re always online.

Eva: Do you feel like online and offline life has become unblurred for you over the past month?

Eoin: I’ve noticed I’m a little more present with my family. I no longer consult Wikipedia at the dinner table. I no longer check the news while I’m playing with my kids. Overall, I feel a little freer, a little less tethered.

It’s not like I’m totally disconnected. I can almost always be reached via phone and text and I’m never more than 20 minutes away from email, Slack, and Zoom. Still, my consciousness feels a little bit less divided these days.

Eva: Do you miss your smartphone? Have there been any times you’ve wished you had it?

Eoin: I sometimes take out my flip phone and mindlessly gape at it, just as I used to do with my iPhone. But I don’t get sucked in. Unlike with the iPhone, with its bottomless content pits, on my flip phone there’s nowhere to go. So I snap it closed like Captain Kirk and put it back in my pocket.

I’ve had a couple mishaps, though. The other week, I was doing a curbside pickup at Whole Foods, and I couldn’t figure out how to alert them to my arrival using the iPad version of the Amazon app. I ended up having to phone my wife and have her use her iPhone.

Eva: Oh no! It seems like society has gotten to a point where it’s assumed that everyone has a smartphone.

Eoin: Many of us don’t have a choice. If you make a living driving an Uber or walking dogs for Care.com, you need to have a smartphone.

For others, it’s a social necessity. If all of your friends are on Instagram, or WhatsApp, or Facebook, then your phone is how you connect to people. That can be just as important as being an economic lifeline.

But, as endless tech and business headlines are showing these days, by putting ourselves in a situation where our economic needs and our social lives are mediated by these platforms, all that convenience and flexibility comes at a cost.

Eva: Do you think more people will opt to unbundle as you have?

Eoin: I think we’re actually already witnessing an unbundling. Smart home speakers are growing in popularity, as are smartwatches. Even Google Glass is quietly making a comeback. This doesn’t mean the smartphone is going away, but it does mean that, for many of us, it’s playing less of a role as our primary connection to the internet.

WeChat ‘ban’ won’t criminalise app use, but it could impair messaging, says US