A Sicilian businessman secretly filmed an alleged extortionist and resisted his requests for money by showing him a photo of two anti-mafia heroes killed by Cosa Nostra.

The businessman, a building contractor named Giuseppe Piraino, is one of 13 alleged mafia racket victims who has spoken out to report alleged mafia extortionists.

On Monday, their testimonies led to the arrest of 20 alleged members of the Sicilian mafia in Palermo. They have been charged with mafia association, conspiracy to traffic drugs, attempted murder and extortion, and have been moved to jail awaiting trial. Their lawyers have not commented on the accusations.

“For decades, my fellow Sicilian entrepreneurs and shopkeepers have suffered because of these [men]. But that’s enough now,” Piraino told the Guardian. 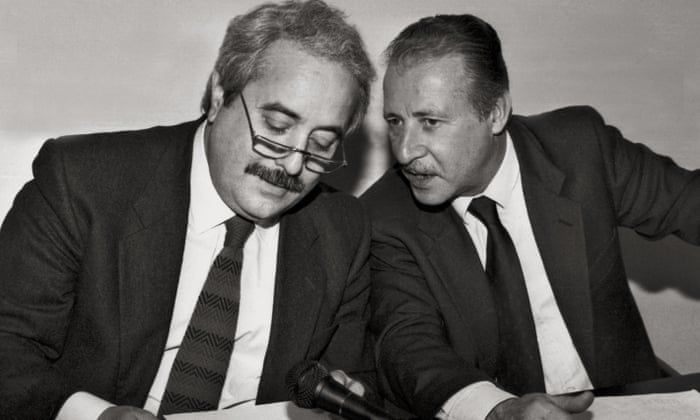 Police have established more than 20 episodes of extortion by alleged Cosa Nostra racketeers, 13 of which were uncovered after alleged victims spoke out, officers said.

One of the alleged mob enforcers, an alleged “debt collector” for the clan, was arrested thanks to the testimony of Piraino, who filmed him with a hidden camera during a request for protection money, known as pizzo.

In the video released by Piraino, the alleged extortionist, Salvatore Guarino, can be seen approaching Piraino and proposing to drink an espresso with him at the bar.

Piraino – who had been told in advance that someone wanted to meet him – refuses and asks Guarino to get straight to the point. “Forget about the coffee,” said the entrepreneur. “What do you have to tell me?”

“I want to ask you for a small gift, because, every year, we organise a party here.” 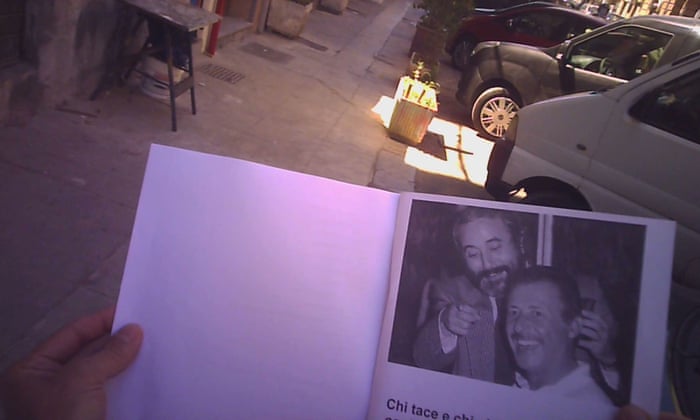 “Give me a €500 for the party,” Guarino says. “So you can do your job nice and quiet and nobody bothers you.”

At that point, Piraino shows him some documents he is holding in his hand, containing a list of men killed by the mafia and the photo of Giovanni Falcone and Paolo Borsellino, the two Sicilian judges killed, in 1992, by Cosa Nostra, who have become a symbol of the fight against the bosses.

“These men are called Falcone and Borsellino,” Piraino said. “Those who are silent and bow their heads die every time they do so, but those who speak out and walk with their heads held high die only once,” said the entrepreneur, repeating a quote written under the photo.

“What is the moral of the story?” Guarino asked.

“The moral of the story,” Piraino replied, “is that this is the mafia and these people died – because of the mafia. And you should feel mortified for what you are asking of me.”

“Keep these photos and this list of men killed by the mafia,” added Piraino. “Keep them and study them.”

“But I asked you for money for the party,” replied Guarino.

“I’ll show you the party,” Piraino replied, before leaving.

“I wanted to mortify them,” Piraino told the Guardian. “Because, for decades, they have mortified thousands of entrepreneurs who were afraid to report them – because they feared for their lives.”

The clip dates back to 28 May but was released on Monday.

Piraino gave the video to the police soon after filming it. Guarino was arrested on Monday.

Most of the 20 men arrested are allegedly part of one of the most active mafia clans in Sicily, the Borgo Vecchio clan in Palermo, including Angelo Monti, a mobster who, according to prosecutors, was the acting boss of the crime family.

Monti was released from prison three years ago and, according to Sicilian prosecutors, returned to his lead role in the clan.

It is not the first time that Piraino, a construction contractor, has collaborated with the police to have his alleged extortionists arrested after filming them with a hidden camera.

“When they call me to give me an appointment, I get anxious, my legs shake, the adrenaline rises,” said Piraino. “It is fear. I’m not Iron Man. But this fear is nothing compared to the terror with which entrepreneurs who are victims of protection money and do not rebel against the mafia are forced to live every day.”