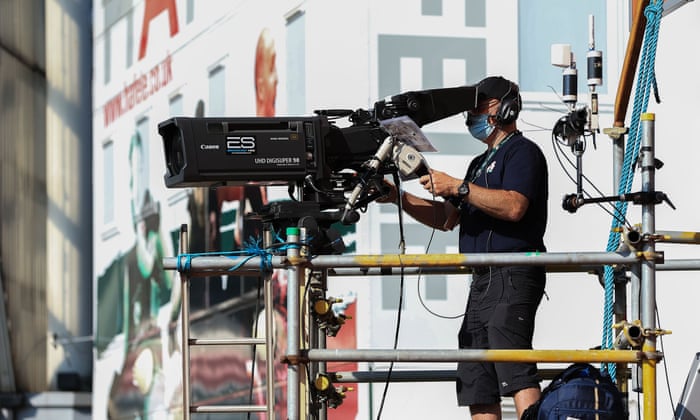 Premiership Rugby is at the centre of another row, this time over television coverage of the Twickenham final between Exeter and Wasps on Saturday week. Until last week the BBC, having initially been approached by PRL’s chief executive, Darren Childs, had been preparing to show the game live to a broader terrestrial audience on BBC Two only to discover the “offer” had been withdrawn.

The situation has prompted irritation within BBC circles, with an entire outside broadcast unit and two prominent former England internationals having to be stood down at short notice. While BT Sport holds the primary broadcasting rights to the tournament, it would have significantly enhanced club rugby’s profile had the game been made widely available in a prime 6pm early-evening slot.

As it is, with no paying supporters allowed into Twickenham, the final will be much less visible with live coverage restricted to BT Sport subscribers plus an edited highlights package on Channel 5 the next day. The viewing figures for the semi-finals last Saturday peaked at 205,000, while an autumn international kicking off at 6pm on BBC Two would be expected to draw an audience closer to two million.

It comes at a delicate time for all parties, with BT Sport’s current £40m-a-year deal due to expire at the end of the 2020-21 season. Amid speculation that rugby’s authorities are considering transferring the broadcasting rights to a dedicated rugby channel from 2021 onwards, it also raises further questions about Premiership Rugby’s current stewardship of the domestic game.

Several of its own clubs were unimpressed last week by the handling of the Covid-19 saga surrounding Sale before the final weekend of the regular season which left the semi-finals still unconfirmed barely three days before the first game was due to kick off.

It is understood some members of the BBC’s planned outside broadcast team were made aware of the situation only when Premiership Rugby issued details of its coverage plans to the media via email last Friday. A Premiership Rugby spokesman insisted talks over potential live terrestrial coverage had merely been “exploratory” and “routine” but failed to offer an explanation as to why the BBC had been forced to cancel its plans at such late notice.

“BT Sport are an open and flexible partner but it didn’t get to the point of us giving BT Sport a formal proposal,” the spokesman said. BT Sport was unavailable for comment.

Irish economy to contract by just 0.4%, despite Covid-19 impact